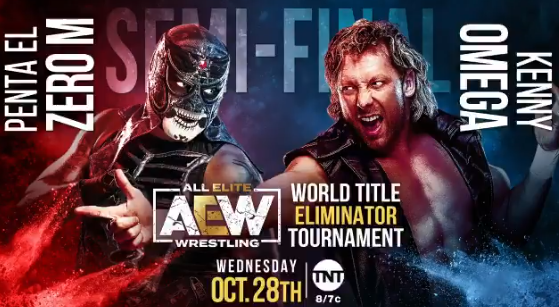 Kenny Omega is still facing a Lucha Brother, just not the one you thought. (PHOTO: AEW)
All Elite Wrestling News Eric Mutter

You may have seen the match between the Legends of Lucha Libre stars Rey Fenix and Penta Zero M from this past week’s AEW Dynamite. It was pretty great! It also featured a spot where Rey Fenix landed on his head doing a flipping headscissors spot and while he finished the match fine, there was some speculation as to whether he’d be good to go against Kenny Omega for next week’s Dynamite (taped yesterday). Turns out he won’t be, as AEW has just announced via social media that Fenix, after pressure from Penta and Eddie Kingston, will vacate his victory from this past Wednesday night. As a result, Penta now wins by forfeit and moves on to face Omega, with a chance at a #1 contender’s match at Full Gear on the line.

While the announcement is a bit disappointing, it’s likely wise on AEW‘s part to hold off on having Rey Fenix wrestle again after a close call, especially after the end of Dynamite featured several people missing Alex Reynolds being knocked out. Quality wise though the match should be just as good with Penta involved; while not as acclaimed as Omega and Fenix‘ previous two big matches, Penta had a memorable match with Omega back in 2018 at All In, the show the ultimately served as the springboard for the formation of AEW. Another positive sign is the announcement also revealed potential issues between Rey Fenix and Penta/Eddie Kingston (the Lucha Brothers stablemate), as the former Lucha Libre AAA Megachampion didn’t seem pleased to be surrendering his shot.

Penta Zero M Vs. Kenny Omega will take place on AEW Dynamite this upcoming Wednesday at 8 P.M. E.T on TNT.