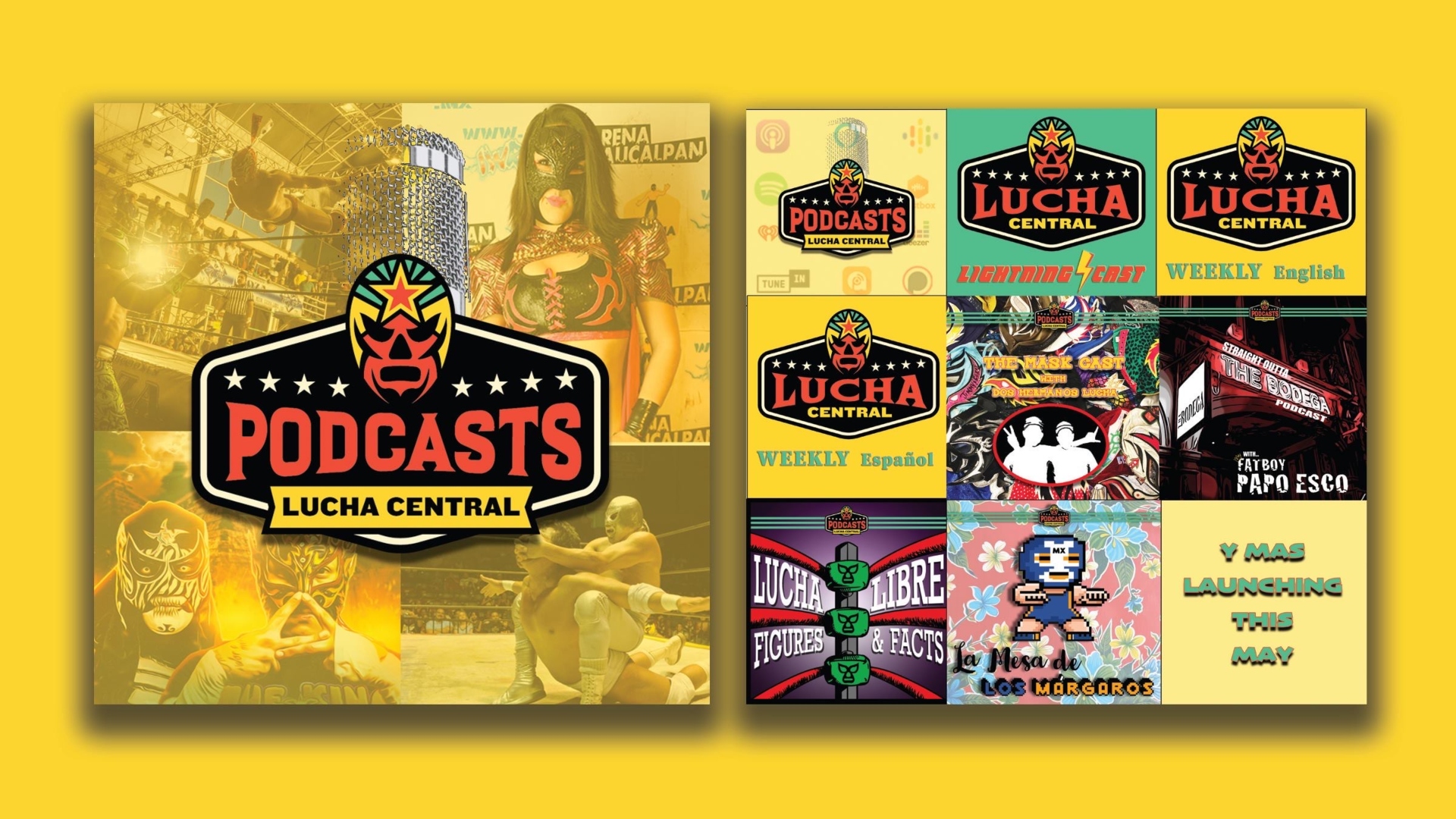 Multi-platform lucha libre focused entertainment company Masked Republic® followed up on the company’s recent launch of their all-new LuchaCentral.Com website with the debut of the Lucha Central® Podcast Network across all major podcast platforms. With programming in both English and Spanish, the network features a wide variety of formats.

To best stay in the know, lucha fans now have multiple options including the daily Lucha Central Lighting Report which, in just a few minutes every weekday, will bring top highlights of the previous day and reminders for what not to miss in the next 24 hours. The series will begin Monday, May 25.

Long form Lucha Central Weekly shows in both English and Spanish which will give listeners a full recap of lucha libre happenings over the past week around the globe including news from Lucha Libre AAA, CMLL and top Mexico based independent wrestling promotions along with luchador related news from WWE, AEW, MLW, ROH, IMPACT Wrestling and beyond. Both versions of the Lucha Central Weekly podcast, English and Spanish, will be released on Friday mornings beginning May 15.

Additional weekly programming from the start will include English language variety show Straight Outta the Bodega hosted by Pro Wrestling Revolution star Papa Esco and promoter Gabriel Ramirez focusing on California independent wrestling, music and all things entertainment. In Spanish, La Mesa de los Márgaros brings together the most eclectic group of individuals on a sports podcast as a lucha libre host, photographer, dancer, doctor, referee and their special guests gather around a virtual table to discuss a variety of topics in their own irreverent signature style. Both Straight Outta the Bodega and La Mesa de los Márgaros will debut new episodes every Thursday beginning today, May 14.

A number of monthly programs with more specific focuses will be released in rotation on Mondays and Tuesdays on the network. Lucha Libre Figures & Facts takes a never-before-seen approach to both lucha libre history and a collectibles podcast. Each episode of the series centers around a previously released action figure of a luchador as the hosts take listeners back to the moment in time the collectible captures, share stories of their chase for the figure and examine the collectability and value of the figure today. Adding to the unique nature of the series is co-host Erik Araña of Boss Fight Studio whose time as a toy designer and executive provides an insight not found on any other wrestling collectible shows. Erik is joined by brothers Jefry and Scott Toon of the Fullyposeable Wrestling Figure Podcast and lucha libre historian Matt Farmer for a must-listen program for both lucha libre and action figure fanatics. The premiere episode is available now.

Even the most casual fan knows that lucha libre and lucha masks go hand-in-hand. Collecting masks is often a goal for many though questions about types, values and how to build an epic collection have never had a real resource – until now. After acquiring piece-by-piece one of the most prestigious collections of masks and wrestling outfits in the U.S., the brothers known as Dos Hermanos Lucha, are bringing their knowledge and expertise to the brand-new series The Mask Cast. Premiering Monday, May 18, the series takes a detailed look into their collection and those of others, exploring the luchadores behind each mask, how the mask was obtained, along with how valuable it may be, and answering listeners’ inquiries about their own collections. The series will also be full of tips and advice for even the most novice of collectors. Plus, the hosts will team with the new LuchaCentral.Com Shop to help fans get their hands on official and authenticated masks.

Additional English and Spanish podcasts are set to debut in late-May and June.

Each network show can be found on its own show page within each podcast platform or, fans can find and subscribe to the Lucha Central Podcast Network show page itself and have every network show delivered to them in one collected feed.

Find the full network currently on Spotify, Spreaker, Pocket Casts and many more platforms and coming within the next week to iTunes, Google Play and iHeart Radio.

Supplemental content for each show along with video versions of Lucha Libre Figures & Facts and Las Mesa de los Mágaros will be available at LuchaCentral.Com.

Masked Republic, a privately held company, is the first integrated live event, merchandising and media organization uniquely centered on lucha libre and dedicated to expanding the sport, deemed an integral part of Mexican culture, beyond the borders of Mexico. The company’s core lines of business include representation of dozens of the biggest stars in the industry, worldwide merchandising through the company’s Legends of Lucha Libre® brand, live event production and management, production and distribution of content across multiple platforms including television, home entertainment, pay-per-view digital media and film. The company is headquartered in San Diego, CA with offices in San Francisco, Mexico City and London.

Lucha Central is a multi-platform destination for everything lucha libre. LuchaCentral.Com, a partnership between U.S. based Masked Republic® and Mexico based Gamacon™ is the premiere bilingual web destination for lucha libre news and content. In May 2020, the brand announced extensions into the podcast and television spaces with the Lucha Central Podcast Network and Lucha Central Report respectively.