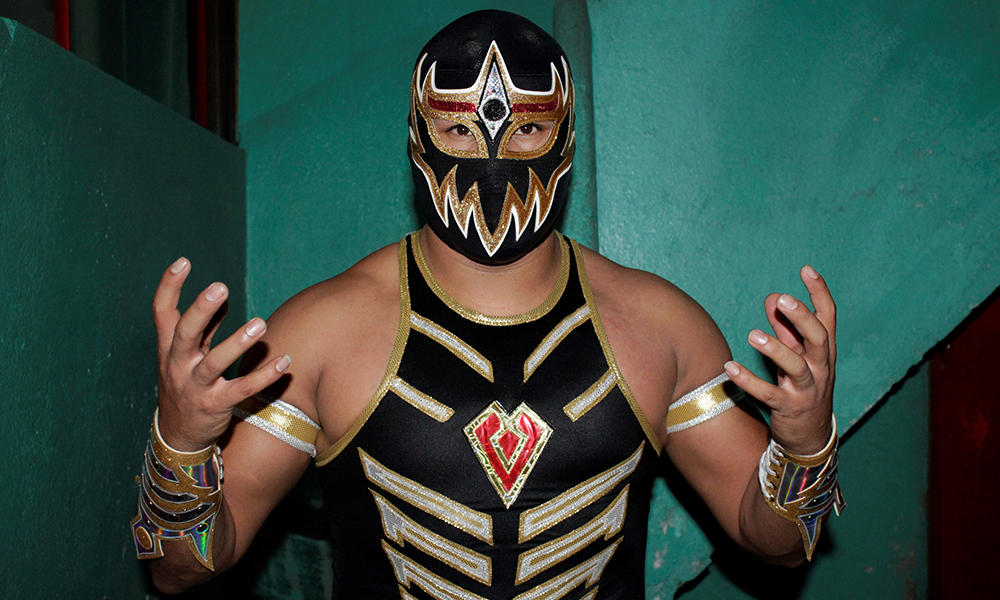 Mascara Dorada is back. And I couldn't be happier.
Opinion Eric Mutter

EDITOR’S NOTE: The views expressed in this article are those of the author and do not necessarily represent those of Lucha Central and Masked Republic.

5 years. 2 months. 24 days. That’s how long it’s been since the man known as Mascara Dorada last wrestled under that name. I cannot tell you where I was or what else I did November 11, 2016, nor can I tell you much about the rest of CMLL’s show that night from Arena Mexico. But I can vividly recall that match, one that saw Dorada team with Atlantis and Diamante Azul against Barbaro Cavernario, Felino and Negro Casas in a traditional CMLL style trios match (contested under two out of three falls rules). Truth be told, the fact that this was Dorada’s last match was the only thing separating it from many other solid, if unspectacular trios matches CMLL has put forward on many a Friday night. But as Dorada worked his magic, walking the ropes, leaping over the ropes for hurricanrana and nailing Casas with one last tope suicida for the road, it couldn’t help but feel special. And it only got greater once Dorada beat Casas with La Casita (Casas’ own move). The locker room emptied to celebrate Dorada as if he was a retiring thirty year legend. So overwhelmed by the gesture, Dorada wept and at one point nearly fainted, with Casas having to pick him up off the mat. Watching from home, I cried with him. Hugs were exchanged as the crowd gave Dorada a standing ovation. Finally all that was left for Dorada to do was to stand on the ropes, as he so often did during his near decade long run with CMLL, and give one last wave as he stared out into the sea of the Arena Mexico crowd. 5 years, 2 months and 24 days ago.

While the name Mascara Dorada had a natural endpoint that night, the man behind the name didn’t. As he was saying goodbye to Mexico, Dorada was saying hello to America via the WWE, under the name Gran Metalik (a reference to the name Dorada began his career under). He had already impressed enough in WWE’s Cruiserweight Classic tournament, making it all the way to the finals before losing to TJ Perkins and earning a WWE contract along the way. It was all bittersweet for me. On the one hand, I had just stopped watching WWE a little more than a year ago, and was so done with the promotion that there was no way I was going to watch it, even for someone as special as Dorada. But on the other hand, this was Mascara Dorada. Even as CMLL and New Japan failed to do as much with him as they could’ve, it was evident how special a talent he was, no more so exemplified by his continued high level of performance in CMLL even as he had a WWE contract waiting for him. Many people with guaranteed money finishing up dates would’ve played it safe; Dorada meanwhile dove over turnbuckles to hit guys with hurricanranas. Yes he was masked, yes he wasn’t the English speaker WWE wanted and yes, there was no reason to believe WWE would see what myself and many other lucha fans clearly saw. But as he stood on those ropes waving goodbye, after that emotional match and an incredible last several months, I allowed myself to hope that maybe, just maybe, this time shit would be different. And in doing so I forgot a key lesson Max Rockatansky once gave to Furiosa; hope is a mistake.

It can never be stated enough how good WWE is at sucking the life out of fans from the loyal to the disgruntled to the  lapsed fans like myself. But they are exceptionally good at wrecking the dreams of lucha fans. I have grown weary over the years of pointing out how many talented luchadores have walked through Vince McMahon’s door, only to walk out a few years later with little to show for it. Mistico came to WWE as a Hall of Famer, left as a punchline (albeit some via his own doing). Andrade was touted as the next big WWE Latin American star; five and a half inconsistent years later he asked for his release. Mr. Aguila, Juventud Guerrera, Super Crazy, Psicosis, Kalisto, Hunico, Hector Garza, Heavy Metal and even legends like Casas, El Hijo del Santo and Perro Aguayo Sr. and Jr. all at one point wrestled for WWE and all wound up doing little of note, a big reason why many people now don’t trust the prospects of talent like Angel Garza, Humberto Carillo, Raul Mendoza and Santos Escobar. Unless your name is Mysterio, Guerrero or for some reason Del Rio, you will never have it made as a luchador in WWE. Mascara Dorada was no exception.

It was a lesson we all had reinforced over the last 5 years, and it became apparent immediately that WWE saw him as little more than a body. Once his CMLL obligations ended and his visa status was cleared, Dorada arrived in WWE…and began working the NXT house show circuit for over three months before finally debuting on WWE’s 205 Live program. Immediately he became an afterthought; Dorada went from one of the two men who could’ve been the first WWE Cruiserweight Champion under the new lineage to challenging for the title only twice over his entire WWE run. The two title matches by the way? Both live events. In his near five year career with WWE as Gran Metalik, Dorada worked 229 matches; only 57 of them were on RAW, Smackdown or NXT and only 7 were on PPV’s (and that’s if you count kick off shows or special events like Worlds Collide). Every now and then Dorada would have a bone thrown in the form of a match with Rey Mysterio, an IC title match against AJ Styles or legitimately impressive showcases with Lucha House Party teammate Lince Dorado. No sooner did those matches end did the opportunities dry up, and Dorada, Dorado and Kalisto (the third Lucha House Party member) were shuffled back to Main Event or chasing the 24/7 Champion, all while being booked exactly how you’d expect Vince McMahon to book three luchadores in a stable called Lucha House Party (supposedly, the group was conceived by Dorada and Dorado to appeal to Vince’s tone deaf sense of humor in order to give them job security). Perhaps worst of all was how the WWE style turned Dorada from one of the best wrestlers in the world to just another face in the crowd. Gone was the Mascara Dorada who thrilled, excited an innovated, replaced by a figure who would’ve been unrecognizable if it wasn’t for them sharing the same mask.

Through it all it was clear to see that Dorada wasn’t entirely thrilled with the situation, occasionally posting about how he missed his old gimmick, as well as teasing when his contract would come up every so often. Nevertheless he persisted, a decision largely attributed to providing a good life for his growing family in the US. This is where it again becomes bittersweet. As a fan of any wrestler, you want to see them performing at the highest level at the biggest stage, not coasting as a watered down version of themselves on a D level show. But sometimes there are things that are bigger than wrestling, and no one can fault Mascara Dorada gutting it out as Gran Metalik for as long as possible to give his wife and children a comfortable life. So there was nothing left to do but wait, either for WWE to actually wake up and realize what they had or to let him go. It wound up being the latter, and only after Dorada himself appeared to decide that he could both provide with for his family and take pride in his work without sacrificing one for the other.

And so 5 years, 2 months and 24 days after he waved goodbye and three months after WWE granted his request for release, Mascara Dorada once again says hello. Tonight he will make his return under the Mascara Dorada name for Game Change Wrestler in Houston, Texas, wrestling another former WWE wrestler in Blake Christian, an exciting young talent in ASF and Gringo Loco, the greatest base in wrestling this side of Dorada’s old rival Euforia. Two singles matches with Loco and Joey Janela await Dorada later in the month for GCW, and March promises appearances at Atlanta’s Mucha Lucha promotion and a CWC Finals rematch with TJ Perkins. It is unknown when and where Dorada will return to in Mexico, though him appearing on shows not featuring AAA talent indicates a potential Arena Mexico homecoming. Whether promotions like Impact, New Japan (which Dorada is familiar with) or AEW (which contains one talent that would really like to wrestle Dorada) are interested in Dorada is also uncertain. Really much is uncertain. 5 years ago Dorada was 28 and one of the best luchadores in the world. Today he is 33 and coming off years of being told to curb his talent. Will he be the same guy? More importantly, can he be the same guy?

At some point I’m sure I’ll care to find out what the answers to those questions are. But to be blunt, right now, less than a day before  I could give a fuck. Because the truth is I’ve been waiting for this day ever since the November 11 night in Arena Mexico 5 years ago. In the limited time I got to see Mascara Dorada perform in CMLL, I watched him do things no one else can do, I watched him perform at a level that only one other guy (Volador Jr.) was reaching in Mexico at the time and, most importantly, I watched him all do that WHEN HE DIDN’T HAVE TO. How many wrestlers would’ve had a contract on the table elsewhere and just coasted? Packed it in? How many would’ve played it safe? Instead Mascara Dorada went out there and like an overmatched soccer team pulling out an impossible win, gave everything he had when he had no reason to. It’s part of what made that last night in CMLL so special; he had given everything, and got a send off worthy of his efforts. I have missed seeing the performer he was back then for 5 years and mind you, I was still discovering lucha libre for the first time in years when I first saw him. I can only imagine those with far more knowledge of Dorada than me, who watched and loved him for far longer than I did, feel about this moment. Whether we get that Mascara Dorada back, a similar version or something entirely different is irrelevant right now; what matters is that we’ll get the chance to see what he can truly do for the first time in a long time. No more limitations, no more stereotypical gimmicks; it’s now just Dorada, the ring, the ropes, his athleticism and his imagination. The way it was always fucking meant to be.

Cubsfan giffed this in normal speed and slow motion. What a legend