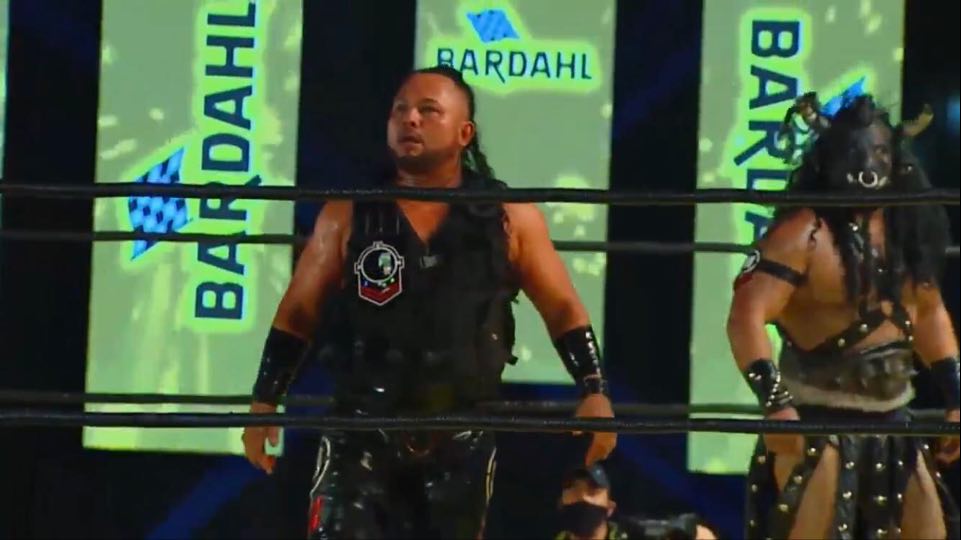 It’s time! It’s time! IT’S AAA TIME! Saturday night’s are AAA night now sports fans, and thank goodness because otherwise it was just going to be more Person of Interest for me. Not that I’m complaining about more Amy Acker mind you; I just like some variety. We got it in this AAA show which, aside from some typical lucha libre weirdness, was a damn good time. We had a great opener, a good Mini-Estrellas Championship match, a great main event before a crummy finish and a match with Argenis…that was also there. But even that was good because of one dude. So overall this was a hopping good time, as AAA is known to provide in this day and age. Don’t believe me? LET’S REVIEW!

Arez defeated Latigo and Aramis after pinning Latigo with the Sahwari Suplex. You know you look at a match with Aramis, Arez and Latigo and you go “that’s got the chance to be a really creative, really insane match.” Guess what? In reality it was a really creative, insane match! It was like Sam’s Town if Sam’s Town was, you know, actually worthwhile. Everything you could’ve wanted from these three was here. They all got in some great dives (with Aramis getting two straight livewires in a row) and the creativity was flowing, highlighted by a sequence where Latigo did a BACKWARDS WALK ROPE that led to him hitting the Super Calo dive. Now there is something you don’t see every day. And that’s only a slice of what they did, which included a well done, complicated opening set and a whole lot of other tremendous stuff, all while working at an exceptional pace. Some AAA matches have been more exciting this year but you could put this one right there with them. Tremendous stuff. Take notes Kenny, Orange and PAC! **** ½

La Parka Negra visited what appeared to be either a bar or a brewery with his evil demon creature. I was typing the review so I missed a ton of it. What a pity.

Dinastia defeated La Parkita and Drago Kid after pinning La Parkita with a top rope Spanish Fly to retain the AAA Mini-Estrellas Championship.Third defense for Dinastia. After the first match took place in what appeared to be a bullring with Hugo Savinovich and Jose Manuel Guillen on commentary, this place mystery teleported to an AutoLuchas show with Jose and Jesus on commentary. This of course means that AAA has become so powerful that THEY CAN NOW BEND TIME AND SPACE! No wonder Andrade vs. Kenny could only happen in this promotion.

I’d post like this too if I was able to bend time and space at my will while also booking super matches. You do you Dorian (and Konnan).

This match was significantly better than I expected. For one, it was following a tremendous three way match with three guys at a whole other level than the talent in this one (except Dinastia). Most importantly Drago Kid and La Parkita, while talented, are wildly inconsistent and Dinastia generally wouldn’t be the guy I’d count on to get the most out of them. Fortunately that’s exactly what happened. Like the opener the pace was tremendous, the dives came often and Dinastia wrestled this match like he was a star. Just tremendous work from him, with both Parkita and especially Drago Kid working well with him and overall keeping up. I’ll echo the sentiment that putting this match after a triple threat was odd and there was nowhere near the creativity or even smoothness we saw from the opener. But for a match I anticipated to be wild and sloppy, it wound up being wild a very good. *** ¾

Mr. Iguana, with wacky music playing in the background, visited a bunch of shops in Puebla. This seems like a great idea and yes, I’m saying that because Mr. Iguana is a highly entertaining dude who could make reviewing twelve straight hours of Hayden Christiansen programming entertaining. He and Omega should do this when Omega comes in.

Dragon, Octagon Jr. and Pimpinela Escarlata defeated Argenis, Chik Tormenta and Mamba after Pimpinela pinned Mamba with a Hurricanrana Rollup. The rudos attacked after the match because, as Bryan Alvarez would say, GOTTA GET THAT HEAT! Of course if you’re getting heat for Argenis and Mamba, you’ve probably taken a wrong turn. And I say that as someone who actually thought this match just passed the threshold of good despite them being in it. I give all the credit in the world to Octagon, Tormenta and to a lesser extent Drago here. Those were the three best workers and they all ranged from solid (Drago) to good (Tormenta) to a great performance by Octagon. He was honestly too good for this match, and yet he put in a full effort in anyway to make the most of it. They really should’ve just done him Tormenta, one on one instead the more I think about it. They didn’t though, and thus we got good lucha from those two, then aggressively okay lucha from the others. It’s not that Mamba, Pimpi and Argenis were terrible, it’s just that we’ve seen everything from the former two before and Argenis is basically a masked La Mascara at this point. I don’t need to see the dude again and somehow I will keep seeing this dude again and again. Such is life. Again, good match but only because Octagon Jr. was really strong and I want to reward him for that effort. ***

Laredo Kid & Psycho Clown defeated Black Taurus & Rey Escorpion (Los Mercenarios) after Escorpion was DQ’d for fouling THE ACE with a low blow. A tradition unlike any other; a DQ finish in AAA on the road to the main event of TripleMania. All that was missing was Psycho bleeding buckets and Pagano showing up just to get powerbombed through a cascade of weapons.

Let’s get the criticism out of the way; the ending sucked. Let’s also just call it now in saying most of the main events building to THE ACE vs. Escorpion at TripleMania will have endings of the Rise of Skywalker variety. Till that point though? This match ruled ass in a way Warhorse could only dream about. It started out slow and felt like it was going to be a regular old AAA match (which would’ve been disappointing considering the talent) and then it picked up something fierce. The final few minutes in particular were just awesome from all four guys. Laredo and Taurus paired off and were, as you’d expect, tremendous. Taurus was mauling Laredo one minute and then basing like a demon the next for Laredo, all while they were working a million miles per hour, and it ruled. THE ACE and Escorpion may not have had their energy, but that’s only because no one does. And frankly they didn’t need it as their sequences crackled too. Escorpion is such an underappreciated talent (the ultimate little things guy) and Psycho, who could just go through the motions here, continued his trend of actively trying new things and going as hard as he could to make this entertaining. This was a great sign for their TripleMania main event, which I already had high expectations for anyway. I might be alone and again, the finish blew chunks. But otherwise I thought this was the second best thing on the show. Really, really good stuff. ****

And with that I am off to watch the Best Bros birthday show! Till we meet again sports fans.