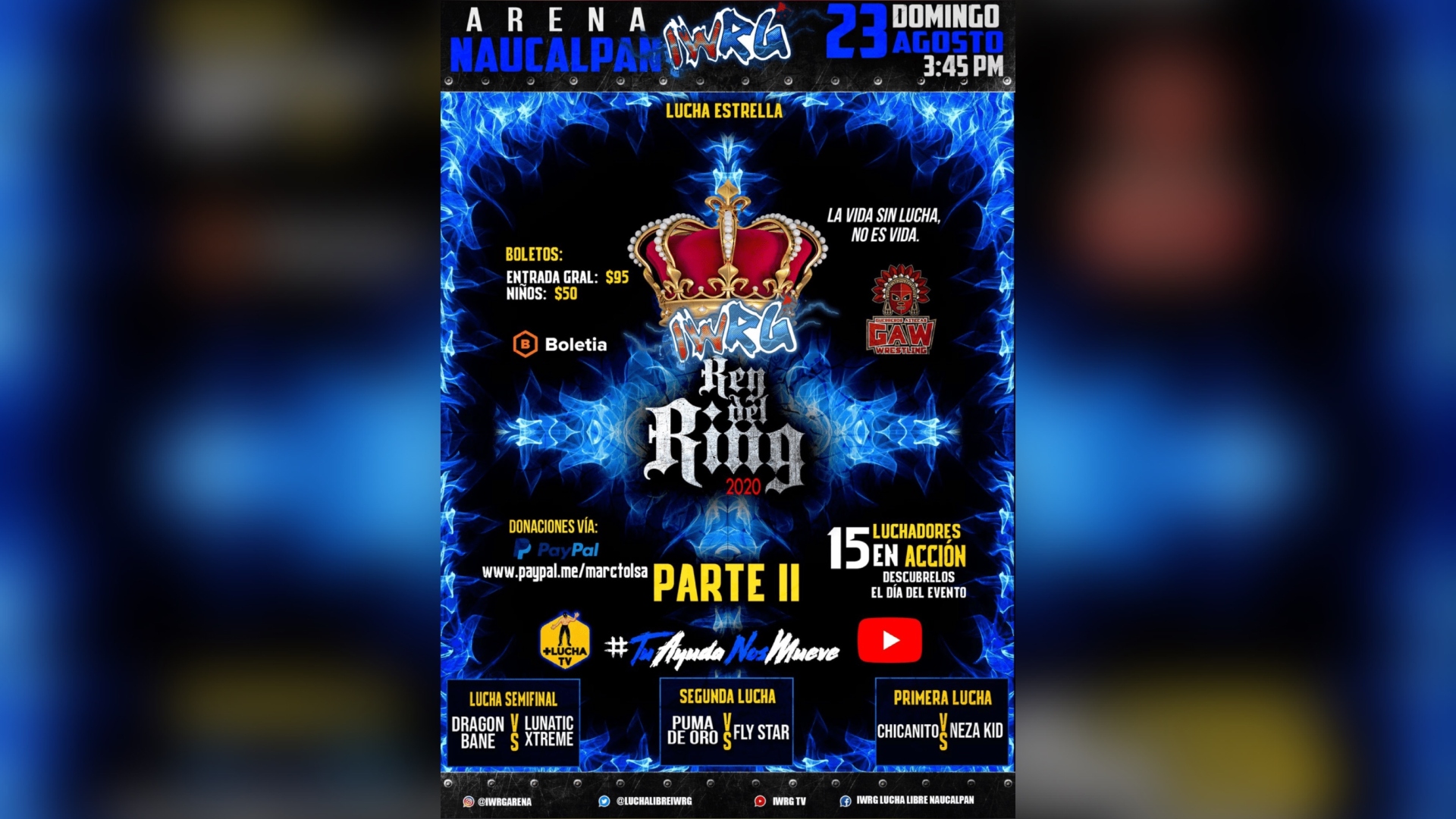 Two months ago, the International Wrestling Revolution Group (IWRG) began their annual Rey del Ring tournament, believing they’d be able to do it all in a three week period. Evidently IWRG forgot that there was a pandemic going on at the time; a few days later the promotion was banned for running any more events by the local commission, Arena Naucalpan was shut down and the second part of Rey del Ring was put on hold…until now! That’s right; lucha libre is starting to get up and running again (even if the pandemic seems to be getting worse in Mexico and running indoor shows seems to be a terrible idea…but I digress) and with Mexico State getting the all clear, that means IWRG can pick up where they left off. And so here is leg 2 of the Rey del Ring tournament, complete with three other matches to boot. And you know me; I just had to dust off the keyboard and do a preview. LET’S GET TO IT!

What to Expect: I have no idea because, spoiler alert, I’ve seen a combined 10 minutes of these two in the ring. This is what happens when you forget IWRG is on and you barge in halfway through the show like Bill Murray in the final act of Space Jam.  Alas it makes it difficult to predict. All I know about Chicancito is that he’s the brother of Power Bull and looks like a capable high flyer. Meanwhile I’ve seen enough of Neza Kid (I refer back to those 10 minutes) to know he can do some cool stuff and, most importantly, he is the son of cult lucha hero Freelance, a man I once made a music video for with an Alkaline Trio song attached! Good times. So yeah; no idea what’s going to happen here. My gut is that both guys will get off some cool moves, but like most undercard IWRG matches I see there will be just as many misses to go with the hits.

Winner: There are two things I just don’t do with lucha libre; I never bet against Queen Zeuxis and I never go against Freelance or anyone associated with Freelance. Ergo I can’t pick against his son! Neza Kid takes this one after crushing Chicancito with a Swanton Bomb.

What to Expect: Alright; two luchadores I’ve both seen wrestle before! Wait, why am I celebrating this?

Of course I say that and must now confess that I can’t remember a single thing about Puma de Oro, even though I watched him on the first part of the IWRG Rey del Ring only two months ago. And this is not a show I don’t remember; Diosa Quetzal and Fulgor had a really good match right before Puma went out there to beat Yoshioka. I think that tells you all I need to know about Puma and his match. Fortunately he’s wrestling Fly Star this time around and Fly Star, who you may remember for his famous wars with tag team partner turned rival turned AAA undercard hero Toxin, is friggin great. Great brawler, capable high flyer, strong worker; whatever you name he’s more than capable of pulling it off. I don’t expect anything too crazy here but he’ll work hard, he’ll get a decent amount out of Puma de Oro and this will be a solid match.

What to Expect: Reason 9,001 why lucha libre is better than everything else out there; there can be a match with a guy named Lunatic Xtreme and he’s “the normal luchador.” This can only happen in lucha libre and only with a match that involves the ultra polarizing Dragón Bane, a guy who once made CIMA go full Molly Weasley on his ass.

A re-creation of CIMA beating up Dragon Bane

I realize it’s been a hot minute since you’ve all probably thought of Dragón Bane (I myself haven’t seen him since the first Rey del Ring show) and you’ve probably forgotten that the kid (he’s at best in his early 20’s) has a bit of a rep. Since there’s not enough time in the day to go through all this I’ll sum it up in a way hockey fans will get; Dragón Bane is lucha libre’s Matthew Tkachuk. He’s young, he has all the talent in the world, he’s more reckless than the third act of a comic book film and everyone that’s been around him wants to beat the ever loving tar out of him. Hence why CIMA did! You never quite know what you’ll get with Dragón Bane; sometimes it’ll be a tour de force performance, other times it’ll be two great dives, five botches and enough Canadian Destroyers to make Rob Viper weep. Hence it really doesn’t matter what Lunatic Xtreme, a very solid luchador, brings to the table here. He’ll do his thing, it’ll be at worst very good and the match will still come down to what Dragón Bane we’re getting. If he’s on point, this will be super. If he’s regressing into bad habits, this will be one to forget. Either way the ride down will be something.

Winner: The only way I wouldn’t be picking Dragón Bane to win here is if Pentagon or LA Park was across the ring from him. They aren’t, so Bane takes this one in a comfortable ten minutes.

What to Expect: I know what you’re thinking sports fans. And don’t worry; Matthew Broderick’s character from Godzilla is thinking it too.

Let’s start with some background. The IWRG Rey del Ring tournament has been around since 2002, introduced first as a thirty man match where four luchadores start, with the other twenty eight luchadores entering one by one after each elimination. In 2008 the tournament was changed to a Royal Rumble style match that eventually became the format for Lucha Underground’s Aztec Warfare; two luchadores start, another luchador enters after sixty to ninety seconds, rinse and repeat till there’s a winner. Starting in 2011 IWRG would then allow the winner of Rey del Ring to defend a title belt, which they would up until a year later when the title was vacated and put up for grabs in the next Rey del Ring. This all brings us to this year when IWRG, in response to the pandemic, decided to split the tournament into two; instead of one thirty luchador Rey del Ring match, there would now be two fifteen luchador semi-finals matches, with the two winners facing off in the finals. Dragon Gate star Shun Skywalker won the first semi-final back in June and now, two months and a shut down later, we’ll find out who joins him in the final. And that sports fans is all you need to know about IWRG’s Rey del Ring.

Now normally I’d say it’s time to break down the match…the problem is we don’t know who’s actually going to be in the match! That’s what happens when the lineup is fifteen Luchador Sorpresa’s; it’s like there’s fifteen mystery boxes and I’m Peter Griffin. The only thing I can tell you for sure is that Skywalker, Bane, Xtreme, Puma de Oro, Fly Star, Neza Kid, Chicancito, Alas de Plata, Chico Che, Shil-Ka, Fresero Jr., Jessy Ventura (LOL), Ovett, Hijo del Dos Caras, Relampago, Toxin, Hijo del Alebrije and Super Nova won’t be in it, either because they’re wrestling on the undercard or because they were in the first semi-final match. Of course now that I’ve said that IWRG will inexplicably use one of those guys again but, assuming they don’t, this will be a whole new field of luchadores. Anyone could win; hell I could even win (I won’t; can’t get into Mexico right now). The best I can give you is that you’ll likely get a few top indie names, no one that’s a huge star (I can’t see LA Park appearing here for example), some hit or miss stuff throughout the match and then a strong final two. In short; a carbon copy of the first Rey del Ring semi-final. Although now that I think of it, this one may be better simply because it won’t have Hijo del Dos Caras in it. That guy is as bad at wrestling as his brother Alberto El Patron is at being a decent human being.

Winner: I must admit I’m going to be taking this pick from the aforementioned Rob Viper after he suggested it on Twitter last night; Hijo del Canis Lupis. Note that this is not the Canis Lupus that once had one of the greatest mask vs. mask matches OF ALL TIME with Trauma I back in 2016. This Canis Lupus is in fact the brother of Dragón Bane; and yes, he too possesses the same “good talent, iffy reputation” qualities of his little bro. He also is very well pushed in IWRG and unless one, or both, of the Trauma’s are here or Aramis decides to pop in, this is Hijo de Canis Lupus’ show. He moves on to face Skywalker.

And on that note it’s time for me to go make lunch, change a load of laundry and get ready for both GCW and AEW later today. I’ll see you all tomorrow for a review of this bad boy sports fans. TILL THEN!