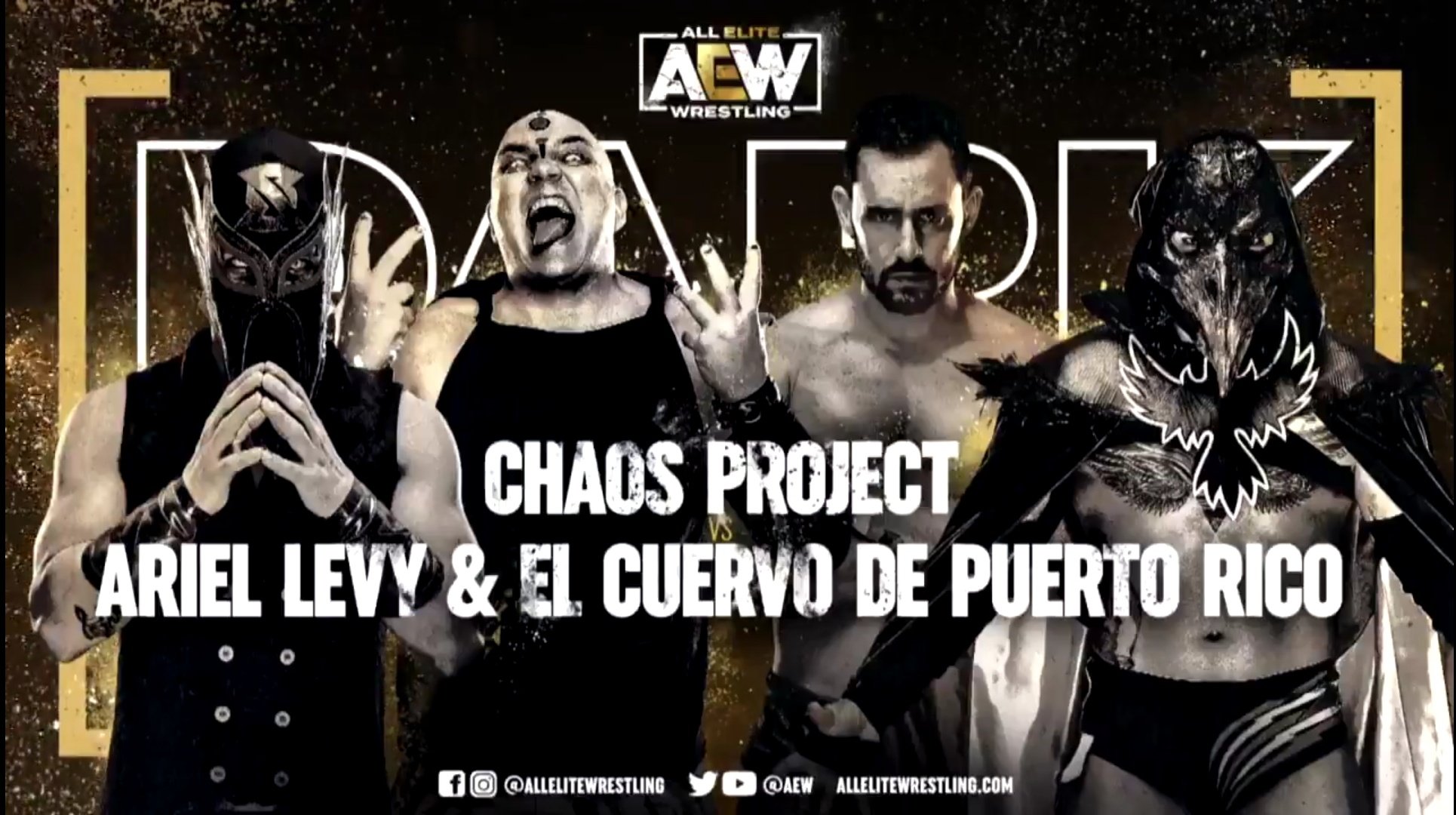 A victim of one of the most controversial moments in recent lucha libre history gets a shot in AEW. (PHOTO: AEW)
All Elite Wrestling News Eric Mutter

These days so many wrestlers are getting a chance on All Elite Wrestling through AEW Dark that it’s hardly a story when someone, even a semi-big indie name, debuts. For some that will remain the case today; for others a specific debut on AEW Dark will be both shocking and heartwarming. As announced this morning on social media, next week’s 13 match Dark show will feature a tag match, with the team of Chaos Theory, Dr. Luther and Serpentico, taking on Chilean wrestler Ariel Levy and El Cuervo de Puerto Rico. If the last name sounds familiar to you, it’s because you’ll know him from one of the more infamous stories in lucha libre over the last decade.

A veteran of IWA Puerto Rico, CWA Puerto Rico and most notably the World Wrestling Council (WWC), Cuervo debuted in Mexico in 2018, working for DTU, KAOZ, PALL and IWRG, among other promotions. He became known to many however for an incident that occurred at a PALL show in Arena Lopes Mateos in Tlalnepantla on November 18, 2018, where he wrestled Angel o Demonio in a Casket Match. In the middle of the match, in an unplanned spot, Demonio hurled a cement block at Cuervo that hit him in the back of the head, sending him crashing to the floor head first, leading to a broken nose and the loss of teeth. The incident could’ve killed Cuervo and the story was widely reported in both lucha libre and traditional wrestling media. Demonio was quickly suspended indefinitely for his actions by the Boxing and Professional Wrestling Commission of the State of Mexico; naturally the suspension lasted less than a month before Demonio was back wrestling (he continues to work the lucha libre independents to this day, for reasons no rational person seems to comprehend).

The match was seemingly Cuervo’s final match; he remained inactive through November of 2019 as he recovered, physically and emotionally, from the traumatic event and in December announced his retirement from wrestling. He quickly backtracked and would wrestle in Puerto Rico that same month; since then he has only wrestled one other match, a bout against Black Taurus in Houston, Texas just a month ago. There were rumors of a Demonio-Cuervo rematch occurring at Zona 23 (Demonio has long been pushing for a rematch if you believe his taunts of Cuervo on social media), but fortunately they have never materialized. As such, next week’s Dark appearance will mark Cuervo’s second match of 2020, his third match since the incident that nearly cost him his life and his first ever appearance for a major American promotion. Given what he went through (nearly losing both his career and his life), his appearance on Dark makes for a tremendously moving story.