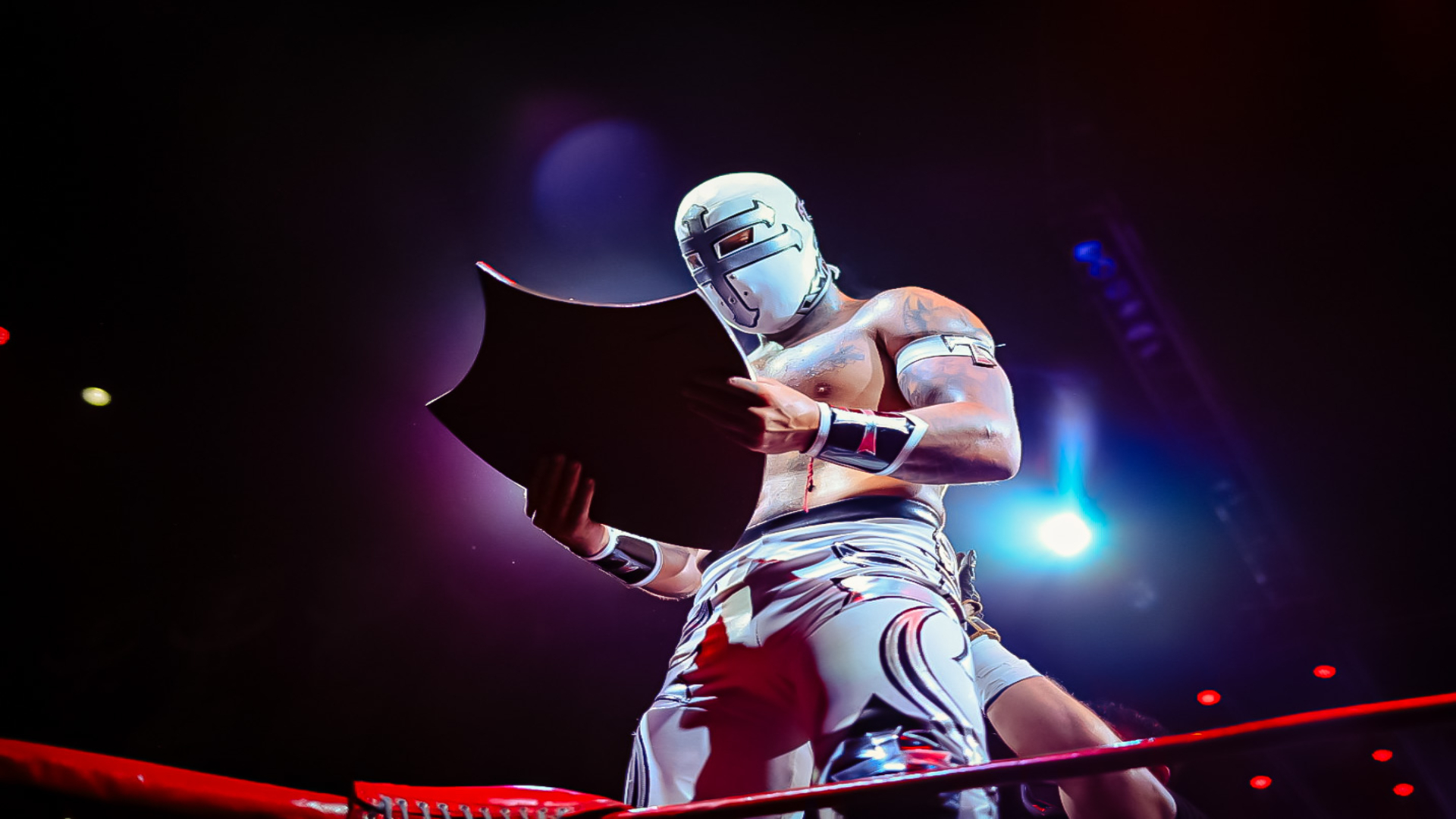 It has been 491 days since I last reviewed CMLL Super Viernes on March 26, 2021. That was a special occasion; the show was headlined by Bandido vs. Volador Jr., in a match that was so great that I declared that CMLL was back (perhaps sarcastically). It wasn’t; if anything, that night was a blip on the radar of a promotion that was going nowhere fast, caught in a slump dating back to when the company couldn’t (or wouldn’t) pull the trigger on L.A. Park vs. Rush. But with people that I trust saying the promotion was gaining momentum again, a promising Grand Prix lineup on the horizon (not to mention the Aniversario in a little more than a month’s time), and an enticing card for tonight’s Super Viernes, I decided now might be a good time to take the plunge. It was, which is why, at the risk of jinxing them again, I am willing to once again declare that CMLL IS BACK! And why wouldn’t I, when there were no bad matches on the show, noticeable changes to how matches were worked (more energy, more creativity, two out of three falls kept to the undercard while the main events were one fall apiece), and two matches that absolutely tore the house down? Hell one match was better than both Rush matches I saw, in person, this past week, as well as gorram Daniel Garcia vs. gorram Bryan Danielson. Are you still not sold on the CMLL Renaissance yet?! No? Then sit down, crack open that Pepsi and let’s get to this review. Maybe I can convince you in 2000 words or so.

Astral, Panterita del Ring Jr., and Suicida defeated Disturbio, Inquisidor, and Raider two falls to one after Astral pinned Disturbio with a modified Magistral Cradle. It’s been a hot minute for me, so I’m sure there may have been openers better than this one, but this was among the best CMLL openers I’ve ever seen. It was also vastly different from most of the openers I’ve seen in my time. Back in the day, the CMLL opening match was usually stiffer than a 25-year-old male at the strip club, and about as lifeless as that same 25-year-old male after fifteen seconds in the strip club. Now it’s only a little less exciting than that 25-year-old right before those fifteen seconds have expired. I honestly have no idea where I’m going with this, and in the words of Chris Tucker, I DON’T GIVE A DAMN!

The point is, the CMLL opener appears to have been overhauled since then, and for the better if this match was any indication. Now it wasn’t perfect; either Panterita or Suicida (The Artist Formerly Known as Sonic) appeared to have a complete brain lapse towards the end of the third fall that took the match off course for a moment, including a spot between Panterita and Raider that didn’t come together as they wanted (and of course, CMLL replayed the botch. Some things truly never change!). But overall, the action was very well done, the effort was a million times better than I’m used to and some moments were really inspired. Astral and Suicida have always been good luchadores and aside from the one slip-up they were on their game today (Astral did a hell of a job getting the match back on track), Disturbio remains the same consistent, solid-as-hell presence he’s always been and Inquisidor…was also there. Seriously, why was he here? The real story of course was Panterita and Raider, the two young studs. I’ve heard a lot about Panterita and he was as advertised; innovative, energetic, exciting, and full of great ideas. And Raider, aside from the one slip up, was there for all of them. I frankly may have been more impressed with him than Panterita; it takes a lot of skill to be a great base, and Raider (Princesa Sugehit’s son by the way!) looks to be well on the way to being one. He can also do a Psycho Driver off the top rope too, so that’s nice. An opener that’s well worth your time! *** ¾

Dulce Gardenia, Espiritu Negro, and Rey Cometa defeated Cancerbero, Hijo del Villano III, and Luciferno two falls to one after Gardenia pinned Villano with a Moonsault Press and Cometa pinned Cancerbero with a 450 Splash. This did enough to be a good match, although it was touch and go for a while as the heat segment for the rudos was, how do I put this nicely, a complete and total snooze. When the technicos were in control though there was some nice energy. Dulce Gardenia remains very entertaining, if not as dynamic as I may like in expanding his moveset, and Rey Cometa is so great that even if he’s not delivering everything in his bag of tricks he’s just a delight to watch. This man should’ve been a superstar; how that didn’t happen beats me. Aside from seeing him, the nicest surprise here was seeing how Espiritu Negro has come along. He was good when I last saw him, but he’s become more ambitious and confident since then, and it showcased well in this match. It was almost like looking at the reverse of Flyer in a way…too soon? Or not soon enough?! In any event, the technicos effort was enough to offset the long, dull rudo stuff, and Cancerbero, Luficerno, and Villano (who has improved a tad) did enough otherwise that this gets over the finish line. ***

Gran Guerrero, Negro Casas, and Ultimo Guerrero defeated Averno, Mephisto, and Titan two falls to one after the UG submitted Averno with Pulpo Guerrero. You’ll be shocked to hear this, but the UG issued a challenge to Averno for a hair vs. hair match afterward and Averno, wait for it, accepted (with a handshake, but still! Who could’ve foreseen that given they’ve only been feuding (checks notes) the whole year! Anyways, this was good stuff. A little by the numbers (it is the UG after all), but the work was good enough to elevate it. This is my first opportunity to say this, and it’s not something folks in the know don’t already know, but my Grodd is Averno a godsend for CMLL. His charisma is great, he’s always quality in the ring and he’s the perfect foil for the UG, especially babyface UG. They worked really well together here, and their eventual interactions in the cage match…excuse me, I meant hair vs. hair match, should be very good. Everyone else here was fine; Titan and Gran Guerrero probably had the best wrestling of everyone involved, Mephisto existed and Negro Casas, as always, was a bundle of joy. I know he’s 62, I know he’s not what he was even three years ago, but he still gets the most out of everything he has left when he goes out there. That’s why he’s the greatest luchador to ever live and it’ll be the saddest day when he retires. WHY AM I EVEN THINKING ABOUT THAT?! Good stuff. *** ¼

Pequeno Olimpico defeated Ultimo Dragoncito in a mask vs. mask after pinning Dragoncito with a Small Package. As a result, Dragoncito unmasked, revealing himself as Miguel Ángel Arciniega Peña from Guadalajara. Coincidentally one of the other Lucha Central originals is named Miguel Peña…and holy shit, HAVE I BEEN COMRADES WITH ULTIMO DRAGONCITO THE WHOLE TIME?! THIS CALLS FOR AN INVESTIGATION!

Alright, there will be time for jokes later. Years ago, there was a career vs. career match in CMLL between Virus and Metalico. Virus, as you may know, was/is an outstanding luchador, arguably one of the most underrated performers. Metalico was a midlevel guy many (including myself) labeled a bitter veteran, who never did much of anything and was generally an eyesore. But on that night, with his career on the line, Metalico turned into the second-best luchador in the world and went out on his sword in what was one of the more memorable CMLL matches I’ve ever seen. And this match tonight was like looking at its ghost. I’ve seen a lot of Ultimo Dragoncito and Pequeno Olimpico over the years; on occasion Dragoncito would show flashes, but often he was just there, and Olimpico was there even less. But tonight, with the likelihood that there was no tomorrow, that there would be no match this big for either man again, they delivered just like Metalico did years ago. The effort was off the charts. The dives were coming, from both men (especially Olimpico) who don’t do them. The drama was thick. The crowd was into it, thanks to CMLL’s last-ditch effort to make this a big deal (which succeeded). This was a big deal, these two men wrestled like a big deal, and when Olimpico pulled the rabbit out of the hat, in a finish that would’ve made Antonio Peña wipe a tear from his eye, it was epic, Faith No More style. And it goes even better in the post-match, where the emotions took over to create yet another unforgettable post-Apuesta moment. This won’t make any MOTY lists, both because it wasn’t quite that level and because of lack of visibility. But I’ll be damned if, like that Metalico–Virus match, I won’t remember this for a long, long time. **** ¼

I had seen two Templario–Soberano matches this year before this one tonight sports fans. The first ended quickly after Soberano got taken out by a fluke injury. The second match went off without a hitch and was great, maybe even pretty great. This was Match of the Year level stuff. These two came in hot (and like the last match, unburdened by the two out of three falls structure), stayed hot the whole way through, and pretty much just threw bombs at each other. If you wanted to see great moves, you got them from both guys, with exceptional crowd heat along the way that only Arena Mexico can provide. They were even hotter for this match than the mask match, and were heavily behind Templario to an almost shocking degree (unless you agree with me in that the crowd wasn’t chanting “booo!” but “SCREWWWWW MASTER” to Soberano). But most impressive is that, between all of that, these two told a story. Soberano is a risk taker and an innovator, so you knew he was going to take chances, even more so than fellow daredevil Templario. And no matter what he did and no matter what he tried, Templario had an answer every single time. This is becoming a recurring theme too as Templario similarly had Soberano’s number in their last match, which was also won by, you guessed it, Templario. It makes for an interesting dynamic should these two collide in a mask vs. mask match, which both men seemed eager to get to in the post-match. Of course, CMLL also had Averno and the UG set up a big Aniversario Apuesta match earlier too, so who can say for sure? Well actually, I can say this for sure; the only way this match can be topped is if these two do face off in a mask vs. mask match. If you wanted proof that CMLL was back in the saddle again, you’re looking at it. **** ¾

And that friend is how a column becomes a review. I’m out of here for now; TILL NEXT TIME! 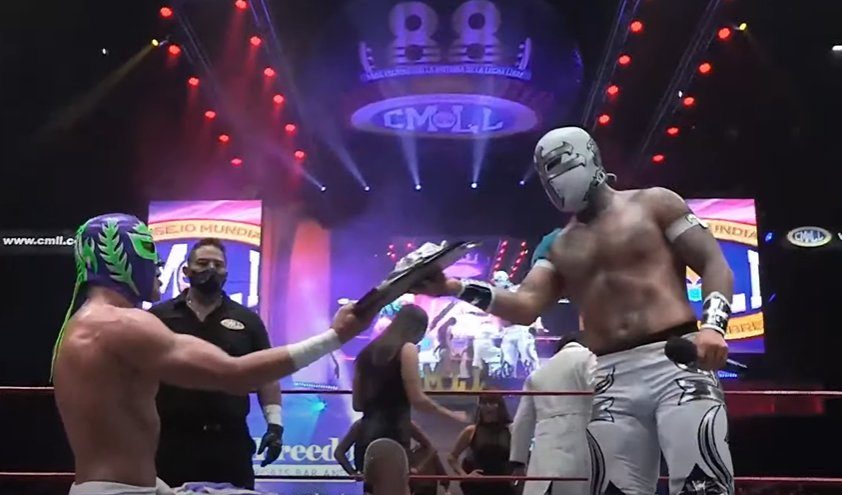 Two kings (and also Edgar and other people)