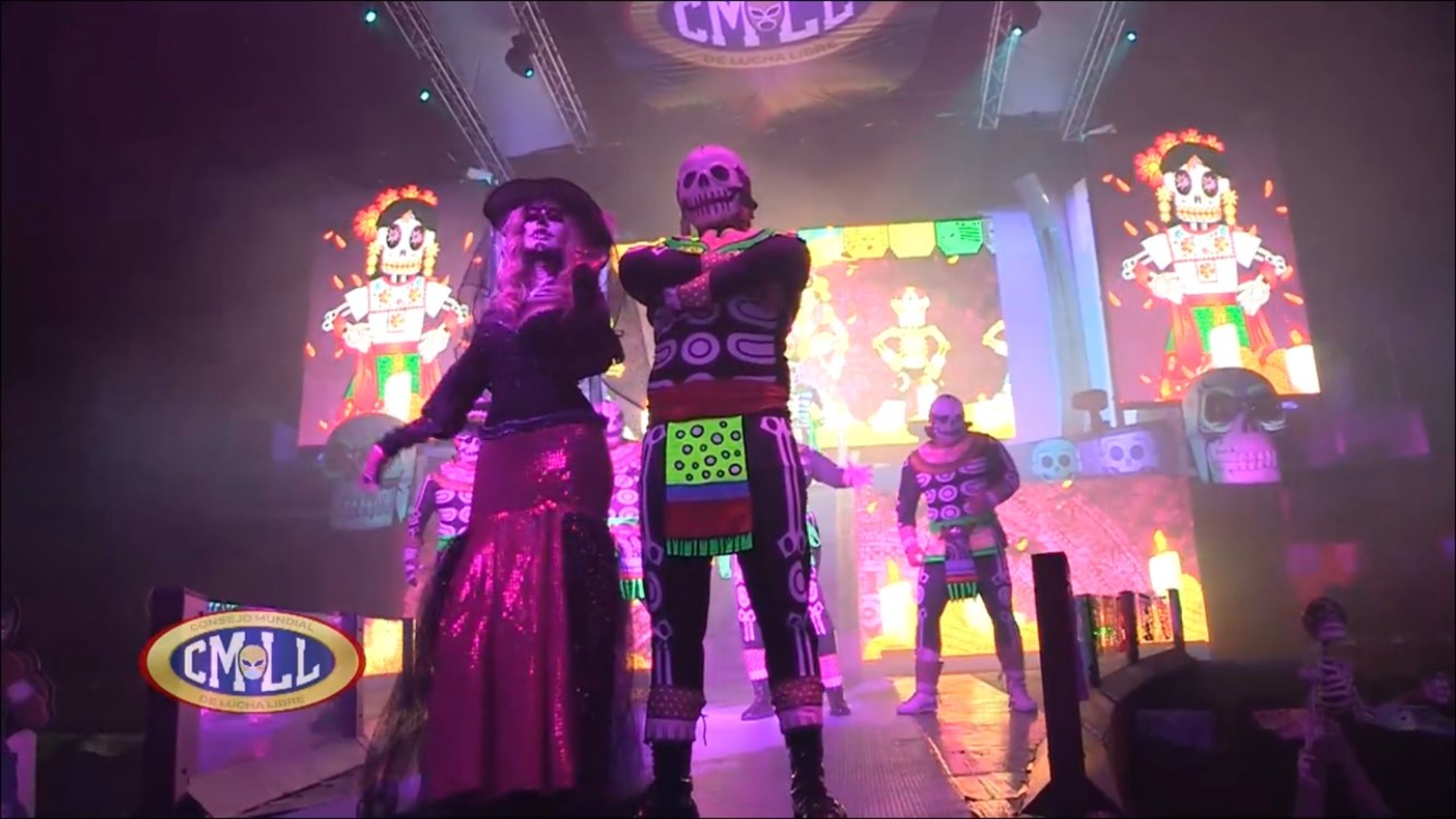 It was a big show to forget from CMLL. (PHOTO: CMLL)
CMLL Event Review Eric Mutter

Tonight’s CMLL Dia de Muertos show isn’t getting the full review/results hybrid treatment, mainly because for a little bit it didn’t look like I was going to be able to see the show. I finally managed to get in on the action during the second match and, as the rest of the text should show, I really wish I had just done something else with my evening. Hey; we all mistakes right? If you were off making a mistake far more interesting than this one, here’s what you missed.

Chamuel & El Guapito defeated Atomo & Microman two falls to one. This match aired before the stream got on track so no details on this one. I’d bank on it being the usual Micro’s match; Chamuel and Microman were good, everyone else was, as Annie Edison would say, eh.

Audaz, Espiritu Negro, Rey Cometa defeated Dark Magic, Okumura, Vangellys two falls to one after Negro and Okumura pinned each other and Audaz pinned Vangellys with a Dragonrana. Yes you read that right and the only thing more amazing than that moment happening was the fact that it was executed decently. What a world. Match was otherwise nothing special. The technicos were at least trying and Audaz in particular had some good moments, but this rudo team may have legit been the worst rudo team in the history of the western hemisphere. Seriously; who the hell thought Okumura, Vangellys and Dark Magic was a good idea for a team?! Stunningly Okumura and Vangellys were pretty bad and Dark Magic’s big moment was taking a headscissors to the floor…where he nearly landed right on his dome. * ½

Reyna Isis defeated Lluvia two falls to one after pinning Lluvia with a Death Valley Driver to retain the Mexican National Women’s Championship. 1st defense. This wasn’t great and, in fact, wasn’t even average but it continued the trend of the CMLL luchadoras division being more enjoyable over the last few weeks anyway. Both Lluvia and Reyna were working very hard; unfortunately they still both top out around average and as such the match has several sloppy moments because that’s just what you’re going to get from these two. Even still I will take this match over what we generally get from this division, and certainly what we get from Dalys. This was a hard fought, average match and that’s more than fine. * ½

Angel de Oro, Forastero, Niebla Roja defeated Negro Casas, Soberano Jr., Titan two falls to one after Oro pinned Casas with La Casita. To say this sucked would be an insult to the word suck. It’s almost impossible to believe these six luchadores could have a match this bad and yet the proof is right here. The only thing keeping this from being a completely negative match was a few inspired moments in the third fall from Soberano and Titan; in the end though those moments only served to save their dignity. The rest of the match was a slog, bogged down by rudo tactics from Oro and Niebla Roja (who are usually technicos) and a whole lot of uninspired action. And then there was the ending, where it looked like it was building to Forastero getting the pin…and then Oro took it instead for no reason. I haven’t seen Caddyshak II but I can’t imagine it’s nearly as bad as this drek. TRAVESTY

Terrible defeated Euforia two falls to one after pinning Euforia with a cradle to win the Rey del Inframundo Championship. Not that the competition was stiff but this was EASILY the best thing on this show and at least in my opinion a legitimately good match. It took a bit, with the first two falls being hard to get invested in, but once they got to the third fall things kicked into gear and these two had were rolling. Not a surprise; Euforia is one of the most underrated luchadores alive and Terrible is often overlooked himself. The issue was never them; it was that this match came from out of nowhere with no rhyme or reason, much like the rest of CMLL. Alas these two were still able to make the most of it and this probably would’ve come off even better with an audience. A legit good match on an otherwise sorry ass show. ***