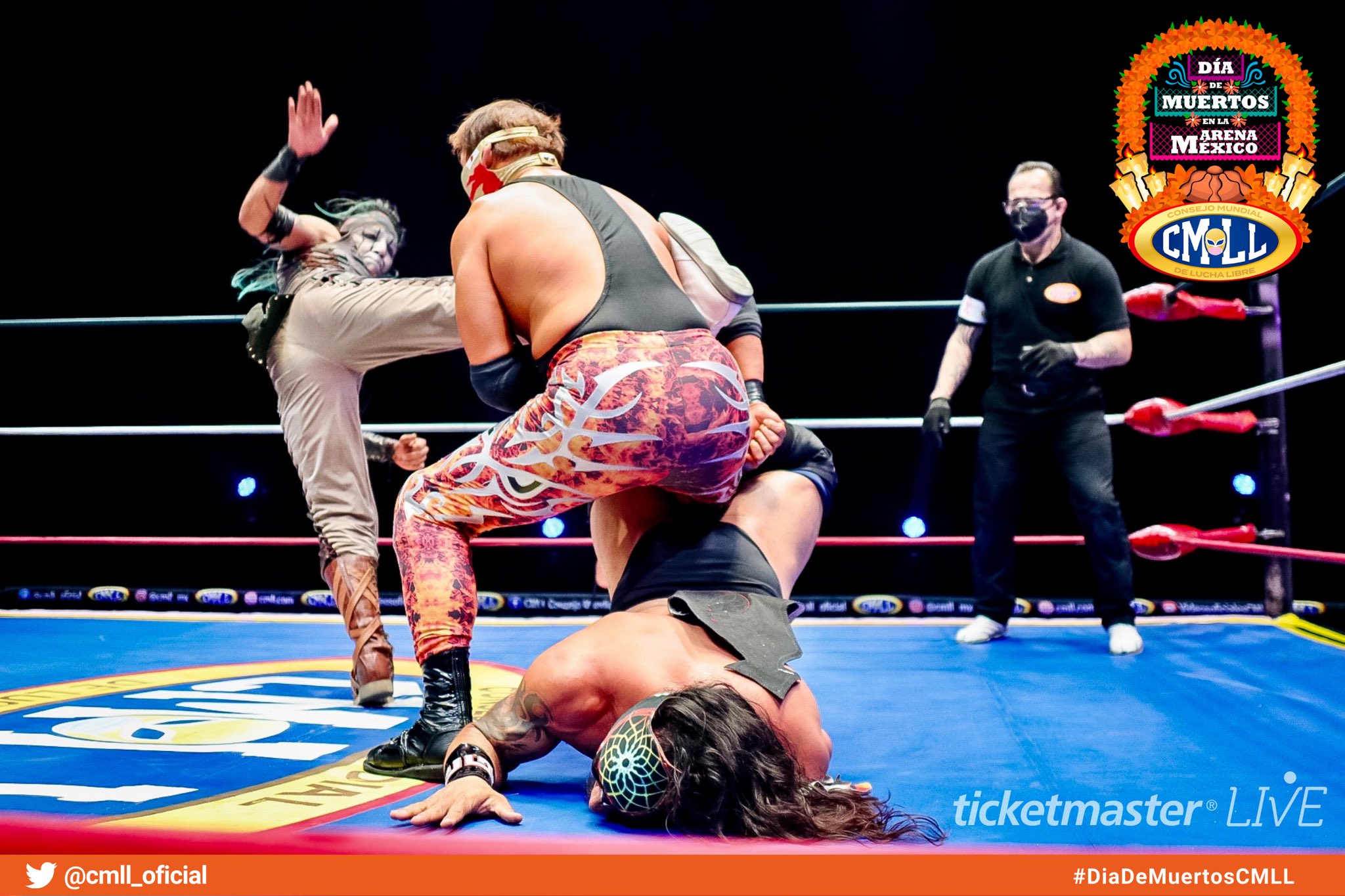 Something is definitely happening with these CMLL Friday shows. I mean sure; they’re still overall a chore to get through and I still need to do something else at the same time to entertain myself at points. But for the second straight week in a row there some interesting things going on with this show. Are they leading anywhere? Do they mean anything? It’s CMLL so probably not…and yet you wonder. Or I will after tonight because right now I just have to finish this review. If you were too busy waiting for IWL to get back to you about why they seemingly can’t clarify what happened between Will Ospreay and Pollyanna, here’s what you missed.

Espanto Jr. defeated Oro Jr. two falls to one after pinning Oro Jr. with a Liger Bomb. This match probably didn’t go 12 minutes…and yet it felt like I was watching The Postman all over again. Unlike that film I at least had sympathy for someone involved in this slog. Oro Jr. is a good luchador; he tries hard, he has some cool moves and unfortunately he’ll never get a chance to truly improve because he’s stuck in the purgatory known as the CMLL undercard. Tonight he was served up to Espanto Jr., who is bad, should feel bad, and put in the same amount of effort I do in searching for my cat’s toy when it goes behind the couch. Oro Jr. put more efforts in some of his bumps than Espanto did overall. So yeah; this was no good. * ½

Espiritu Negro & Rey Cometa defeated Ephesto & Okumura two falls to one after Negro pinned Ephesto with a Swanton Bomb and Cometa pinned Okumura with a 450 Splash. I made the executive decision before this match to both watch it and continuing reading The Sandman: A Game of You at the same time. As it turns out, reading about Barbara, Luz and Wilkinson crossing The Land was exactly what I needed to avoid being bored out of my mind while watching this match. 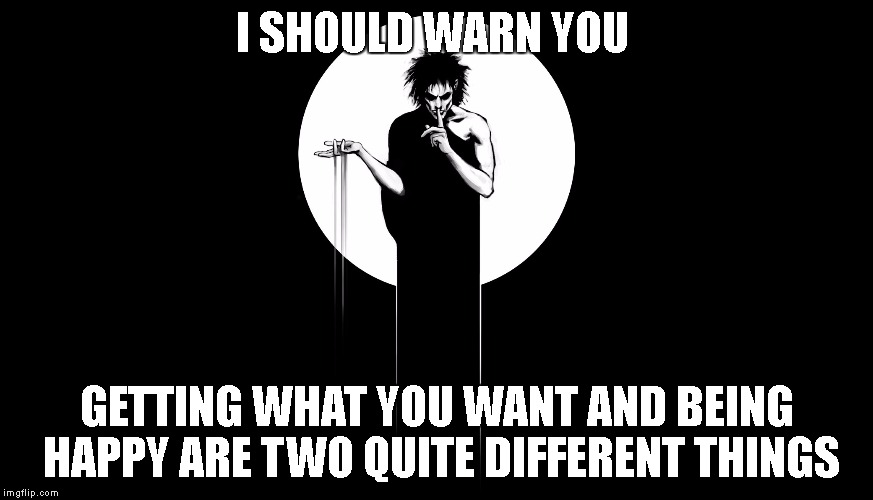 Of course it still wasn’t all that good. Rey Cometa and Espiritu Negro are a legit good team but they weren’t going all out here and for good reason; their opponents were Ephesto and Okumura! The former is old and checked out and the latter is Okumura. Why he’s still around stinking up matches like this when CMLL could find any other ambassador to help out with their New Japan relationship remains mystifying. Whatever. This was duller than a 90 year old butter knife. *

Princesa Sugehit defeated Marcela two falls to one after pinning Marcela with a Michinoku Driver to win the CMLL World Women’s Championship. Surprise title change! My expectations were really low for this one, so it was a pleasant surprise when it got me to put my comic down and get fully invested. I wouldn’t quite call this a good match; Marcela just isn’t capable of being a high caliber performer anymore and it showed here where here body wasn’t able to do what her mind wanted. That said they both tried much harder than I would’ve thought (the fact that this was once on the Aniversario, and now free to get as much time as they wanted, probably contributed to the effort level), Sugehit in particular was very good and the title change was the right call. An above average match, probably the best thing you’ll see from the CMLL Women’s Division for quite awhile. ** ¾

Euforia and Terrible defeated Templario, Diamante Azul, Soberano Jr.,Valiente, Mephisto, Stuka Jr., Rey Bucanero and Atlantis Jr. to move onto a singles match next week to determine the new CMLL Rey Inframundo Champion. It’s generally nice to see a CMLL cibernetico…except for tonight because this match, like The Killers post Hot Fuzz, was no good. A live look at Brandon Flowers being sad I said the Killers sucked after Hot Fuzz. Search your feelings Brandon; YOU KNOW IT TO BE TRUE!

There were some good moments mind you. I thought Soberano looked really good, Atlantis Jr. had some nice moments (especially with Soberano early on) and despite some rough patches Euforia, Templario and Terrible were solid. Unfortunately Atlantis Jr. was eliminated first so his run was short, and the other five guys were either uninspired (Mephisto, Rey Bucanero), just kind of there (Stuka Jr., Valiente) or Diamante Azul (Diamante Azul). The final two pairing also made no sense; Soberano vs. Templario has been a built in feud, Euforia is currently breaking away from Los Guerreros (which features Templario)…and they go with Euforia vs. Terrible? A completely random match? It’s a call only CMLL could make. It’s not like the match was all that special beforehand but that certainly brought it down a peg. * ¾

Caristico & Mistico defeated Titan & Volador Jr. two falls to one after Caristico submitted Volador with La Mistica and Mistico pinned Titan with a Codebreaker out of a Butterfly to retain the CMLL World Tag Team Championships. This was the best match on the show and it was still marred with a poor finish, only the twist was it wasn’t CMLL’s fault this time. Unfortunately, late in the match, Volador Jr. hit a Super Rana on Caristico and landed head first on the ring ropes coming down, appearing to break his nose. The match was stopped momentarily and then wrapped up quickly, with Titan, Caristico and Mistico all looking very concerned. It was certainly a flat finish, but it was definitely the right call to do what they did. Prior to that the match, aside from Caristico being hesitant to do dives, was trending towards borderline great at worst. As such it was still good. Mistico stepped up compared to last week and the Titan/Volador unit continues to be a revelation. They have such great chemistry together and separately they were still strong, with Titan delivering another great performance and Volador continuing to look rejuvenated. It made the injury suck even more; this is the best, most natural Volador has looked in the ring in some time and his reward was an unfortunate injury. Hopefully he’ll be good to go soon. Warts and all, this was still a good close. *** ½

There you have it sports fans. I’ll see you Monday for a special AAA presser. Till then! 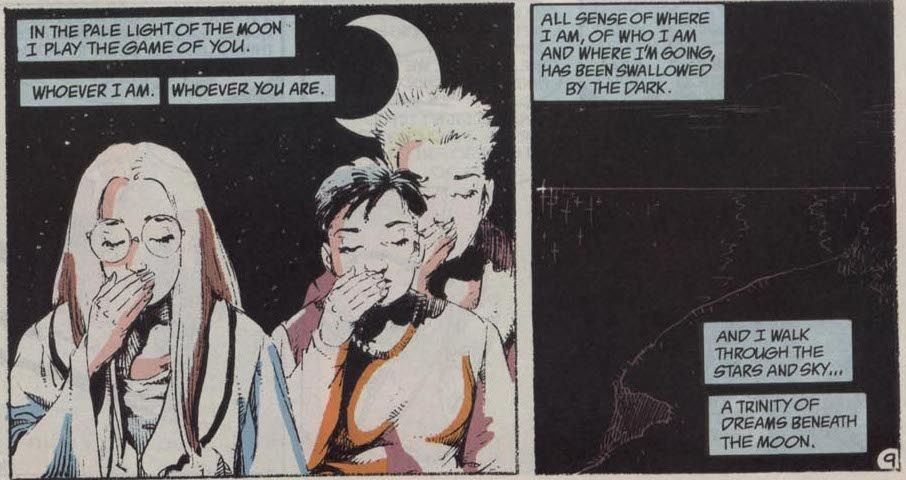