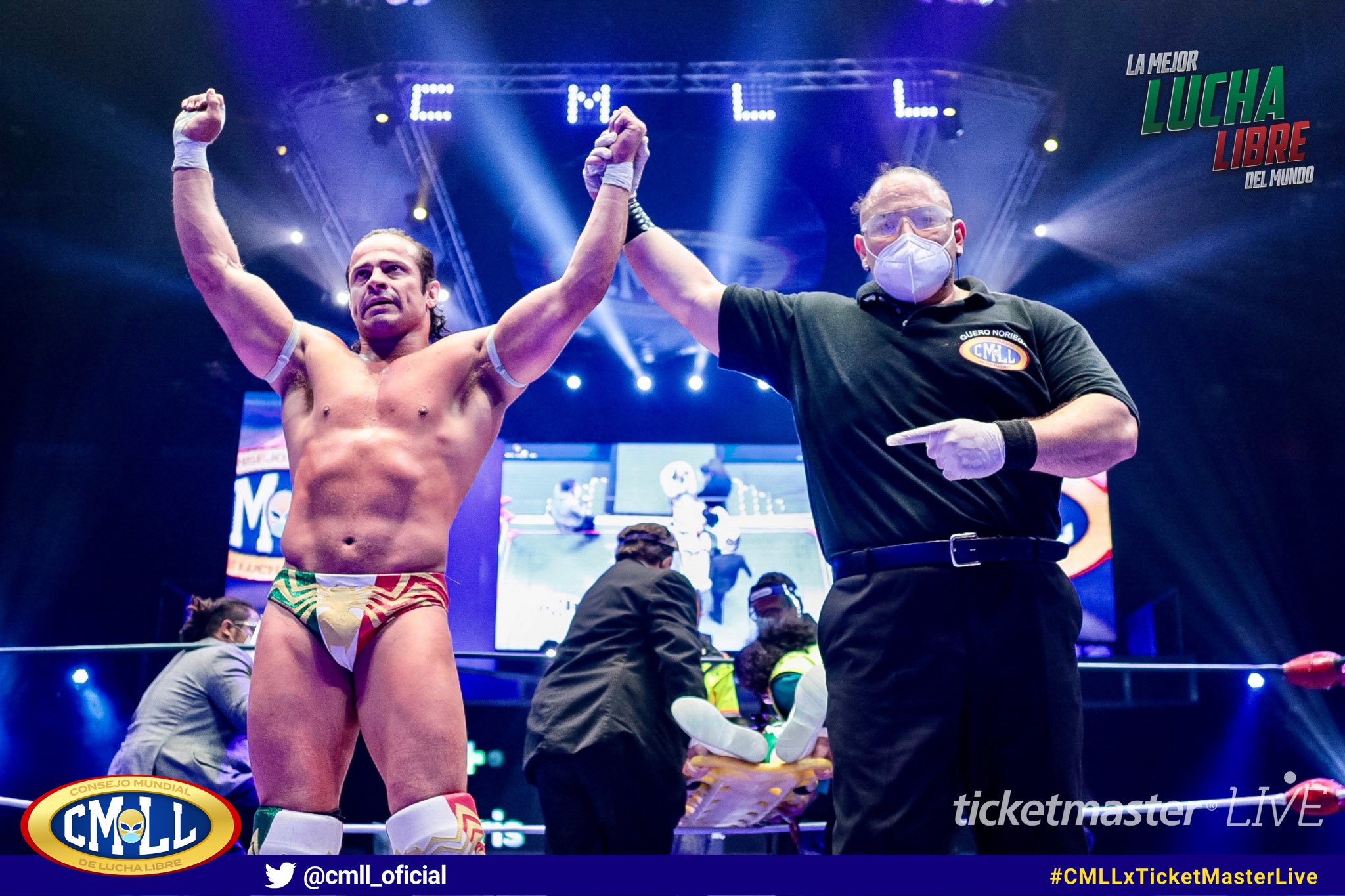 Well we’re officially one week away from the 87th CMLL Aniversario. How am I feeling about it? Honestly; pretty sleepy, and not just because I woke up early today. Quite frankly it’s tough to get excited about the Aniversario now for several reasons. One is that it’s likely to be a show with no fans, which will certainly make things tough. Another big one is, well, the shows leading up to it have been pretty mediocre. Tonight was no different. We did get the first match since CMLL returned to get as close as possible to being great, but we also got four snoozers, including a main event that shows just how ill suited CMLL is for this environment. And with that we’ll just jump into the full review so I can not spend any more time with this bloody show.

This match produced two mysteries; why Super Astro Jr. was stuck wrestling Diamond and why he lost this match to Diamond. Wait those aren’t mysteries; this is CMLL! But yeah, none of this made any sense. Super Astro Jr. is a really good luchador and had as good a performance as he could here with some cool dives. And then there was Diamond, who did a few backflips, one mediocre suicide dive and a bunch of other stuff that was uneventful leading to a victory no one could’ve possibly cared about. Could CMLL have not gotten Coyote for this spot instead? Was it so hard to maybe give Super Astro Jr. a W? This is why we’re all waiting around for the AAA Drive In shows to come around so we can get away from bullshit like this. A deflating opener in terms of who Super Astro Jr. had to face and put over. Dude deserves better.

I’m pretty sure Charles Dickinson put together this match because this was the tale of two bouts. The first one was Jarochita and Reyna Isis, once again, showing off some really good chemistry together for some inexplicably good lucha. The second was La Guerrera being a step slower and Amapola going so slow it was like that Family Guy scene where Tom Tucker walks in slow motion.

As such this made this match difficult. There was some nice energy when Reyna and Jarochita were in, but it was immediately wiped out by Guerrera, who I seem to recall once being good, just not being on their level and Amapola giving a performance that was somewhere between “I’m physically shot” and “I’d rather be anywhere else but here.” You can make the argument the match was messed up by Lluvia not being here (Guerrera took her spot) but given Lluvia’s skill level and Amapola’s effort I’m not sure it would’ve been much different. Whatever the case this wound up being a match with some flashes, but overall did nothing for me other than make me wonder just how the hell Jarochita and Reyna Isis became so good against each other. It boggles the mind I tell you.

IT! HAS! HAPPENED! Finally sports fans, CMLL had an empty arena match that I can safely say was very good.

Of course very good is still not quite great but it’s CMLL; baby steps are required. And honestly this match would’ve been great if these four had gotten a few more minutes. I’m not sure why they didn’t get it because these guys were rolling and another dive train sequence I think would’ve added a ton. Even without it though this was the best action CMLL has produced in some time. It was easily the most complete performance by the Rey Cometa/Espiritu Negro team, with Cometa once again being brilliant and Negro having his best performance since CMLL returned. What helped was that Hechicero and Mephisto were on their level and then some. Both rudos put in some great work; Mephisto looked completely re-energized from his time off and Hechicero is, well, Hechicero. Even with months off he’s still one of the best luchdaores alive and he brought back the creativity, athleticism and technical ability tonight with tremendous effect. In fact, as good as the other guys were, Hechicero pretty much made this must see just from his work alone. Thank Grodd CMLL has him on the Aniversario amirite?! But yeah; big fan of this one. They all worked hard, the work was good, the right team won; it’s almost a minor miracle in modern day CMLL.

Man this was like watching that FTR vs. Jurassic Express from Dynamite all over again. By the end of the match I was very impressed with a couple of dudes far more than others, the work overall wasn’t bad and yet I just didn’t care for most of it. And no, not all of it was because of the Dinamitas. Most of it was but I can’t blame them for Mistico inexplicably trying to do Dragon Lee spots. He was borrowing from his brother heavily; the problem is he’s nowhere near as good as his brother and his imitation was quite sloppy. At least it was an effort though. The Dinamitas didn’t even give us that; they just gave us the same old shit they had been before the pandemic, which was technically serviceable work and not a single thing worth caring for. That was left to Valiente and Bandido; the former was solid and the latter was great, especially at the end with a death defying leap over the turnbuckle (with an assist from Valiente). But when you only have two guys doing good work in a match featuring six luchadores, it’s going to be tough to make this a good match. And it wasn’t. I wouldn’t call it bad either but it’s nothing I’ll remember weeks from now, aside from Bandido’s dive.

Well…at least Gran Guerrero was good here! I don’t have much on this one sports fans. It was the typical CMLL style main event; quick first two falls, long third fall, plenty of big moves and near falls. With a crowd this may have been a hit. The problem was there was no crowd so this kind of felt like a whole lot of mindless self indulgence, with only a few cool Guerrero moves every now and then to break the monotony. Are we really surprised though? The build up to this match had been poor, Volador Jr. has been a patterned worker for awhile now and, in case you’ve already forgotten, this style of match is bad when you’re playing to an audience of zero in Arena Mexico. There was certainly a way to make this work and again, Gran Guerrero was pretty good. Volador just wasn’t at his level and the way things were structured meant these guys were cooked before they even walked out. It’s the sort of match that immediately makes you doubt the potential for Bandido vs. Volador Jr. next week, because there’s no reason to think CMLL or Volador will change things up. I hope I’m wrong but this match is evidence that I’m probably not. I suppose overall it was fine, but like almost everything else on this show, I won’t remember a lick of this days from now.

And on that note I am going to do…anything else with my life. Fear not for a Lucha Bag should be dropping tomorrow, along with a short IWRG preview. All good stuff. TILL THEN!