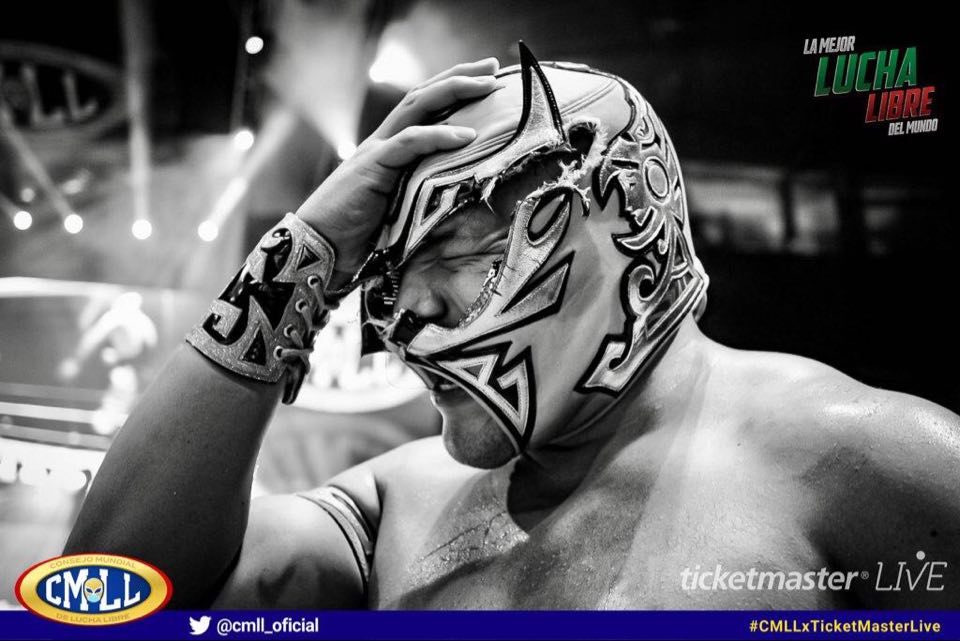 Something that would normally embarrass me happened yesterday; I got caught up in something and forgot to preview tonight’s CMLL show! Coming off not previewing or reviewing the IWRG show from Saturday (which, in fairness, was made difficult by IWRG not streaming the first two matches, including featuring LUDARK, aka my favorite luchadora of all time) missing a CMLL preview would give the indication I’m slacking on the job. Of course it’s CMLL, the show didn’t look great on paper, it’s CMLL and really, was it that big a deal? As it turns out no. While tonight’s show featured an improvement in effort from the luchadores overall and a couple matches I found “good”, it also featured a stream that died several times, was glitchy for one whole match and a good chunk of another, and featured a main event with two guys who did good stuff and four guys out to lunch. Combine that with the usual CMLL problems and here we are! And on that note, let’s review.

There definitely seems to be a theme developing with these CMLL shows that continued over from last week to this one. Like many of the bouts last week, Coyote and Oro Jr. treated the first two falls the same way I treat a Spider-Man level at 2 a.m. Then the third fall happened and the lights came on. In terms of an overall match that strategy hurt because I can’t tell you a single solitary thing about that first fall (other than a Coyote submission) that was memorable. That said the third fall packed a lot of punch, with Coyote doing a lot of nice power stuff and Oro Jr. finally, FINALLY, proving that I had been correct for years saying he was good with some really cool stuff, including a tornillo dive that he’s been holding onto for awhile. Frankly if this had been a Lightning Match with just that third fall this would’ve been good to really good. But the lackadaisical first two falls were enough to send this match to the average spectrum. At least we now know for sure that Oro Jr. is better than Diamond though. Granted; I’ve known that for years but now others will know too!

If nothing else tonight’s show should serve as a grand indictment towards several things CMLL seems to favor. The first match showed how unnecessary the three fall structure is with two lame duck falls and a good third, and this match showed that the CMLL luchadoras division desperately needs to stop being the Dalys Show. Because this match sports fans wasn’t The Dalys Show and it was SO MUCH BETTER than anything else the division has offered in…a year? 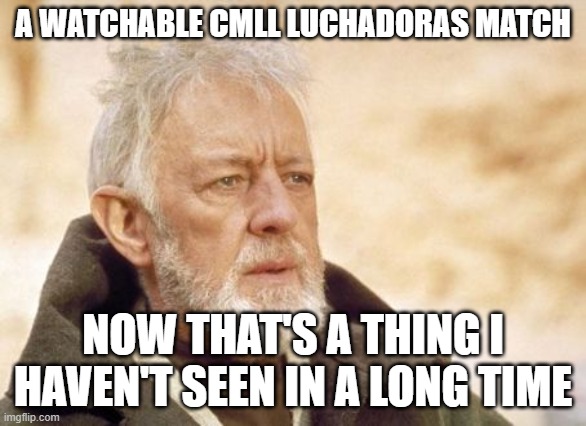 Now to be clear; this was also not a perfect match. I was told that Jarochita and Reyna Isis had in fact pulled off a suicide dive spot successfully in a previous match but they didn’t do it here, with Jarochita instead face planting on the floor when she attempted the move. And on the whole Reyna Isis seems to have hit her ceiling, which is that of a worker who can be average, maybe even good but is generally going to struggle. All that said…boy I found myself really into this match at the end. I thought they worked hard in the first two falls (harder than the Oro and Coyote did in the opener at least), then really kicked it up in the third and it all, somehow, just seemed to work. I think it helped that the match up was fresh, that we weren’t seeing the same old same old we get in every Dalys match and that Jarochita is, in fact, a legitimately good worker when given the shot. She got the shot here and while she can iron some stuff out as well, this was easily the type of performance she should be getting regularly if CMLL didn’t have their head so far up Dalys’ ass. I certainly may be grading on a curve, but this was so much more enjoyable than I expected and something I’d greatly prefer from this division than what we usually get. Maybe it wasn’t great or even necessarily good but it was, as the kids say, a spirited affair if nothing else

I think this is the first time in history I’ve ever felt bad for four guys who went out there and had a good, possibly very good, match. That’s because the CMLL stream, which started getting wonky as soon as Jarochita vs. Reyna Isis ended, just completely shit the bed in this match. Not only did it die for the first few minutes, but the audio was all over the place when the stream got back and by the end of the third fall the video was rotating between going super slow, super fast and sometimes both at the same time. Only in CMLL could the stream work great in week one then completely and utterly go full Sopranos series finale in the second week. It really sucked here because, aside from a few iffy moments early, this match seemed like it was really good. Rey Cometa and Espritu Negro, certainly emboldened by the support they’ve gotten in the Aniversario voting, worked their asses off here and their effort was equalled by Cancerbero and Raziel, who looked more alive than they have in quite awhile. Yet another thing you can attribute to the Aniversario fan vote! I’d have loved to have seen what these guys could’ve done in full speed but thanks to CMLL we will simply never know. What appeared to be a good match marred by the technical failures of the luchadores promotion and the streaming service.

…and things were fine for the third fall and we don’t need another gif describing my reaction to that. Overall I thought this was very good, though I think under normal circumstances it would’ve been even better. There was definitely rust, particularly from Soberano Jr. on a few spots, and while the final two pairing of Titan and Templario was a highlight, it also came well after a point where I thought this match could’ve been a few minutes shorter. Even with those flaws though it’s hard to get upset about these pairings when they put in an effort. And they put in a strong effort; all four were trying (even if they weren’t trying as many dives), the chemistry between both technicos and Templario remains strong even after the layoff, Tiger looked good in a rare semi-main spot and my goodness was it good to see Titan again. That guy is so great it’s not even funny and it’s a shame more people are likely to never know about it. Certainly there were some flaws and the stream once again was a giant let down, but overall I liked the effort and I thought this was a good match, even if it could’ve and will be better down the road.

At least for the third and fourth matches you could argue the stream going all Clippers in the fourth quarter put an unfair damper on things. This match had no such excuse, especially when it featured Bandido and Euforia doing tremendous things for a second straight week in a row. How CMLL isn’t booking this match next week when Bandido is doing cool 450 spots and Euforia is continuing his streak of being the most underappreciated luchador alive would be a mystery if this involved any promotion other than CMLL. It does involve CMLL though and thus we’re getting Volador vs. Gran Guerrero next week instead. That’s fine, the match will be fine (maybe even better than fine) but the build up has been lacking, especially compared to the work Bandido and Euforia have been doing. Combine that with Sanson disappearing other than catching one Bandido dive and Flyer…holy shit was he bad. Whether it’s because he’s just lost it, lost his confidence or both (it’s both) he is just painful to watch and there were times in this match he couldn’t even flip over the ropes correctly. Just embarrassing. This match wasn’t that but it wasn’t good, it focused on the wrong people and worst of all it was WAY too long. Volador and Gran Guerrero better have something up their sleeves for next week because after two straight middling affairs this is not shaping up to be a must see match.

And with that time to fall asleep watching TV! I’ll try to crank out a Luchabag tomorrow sports fans but if not I’ll see you on Sunday for an IWRG review, provided of course IWRG provides the full show. If not, screw ‘em. TILL NEXT TIME!