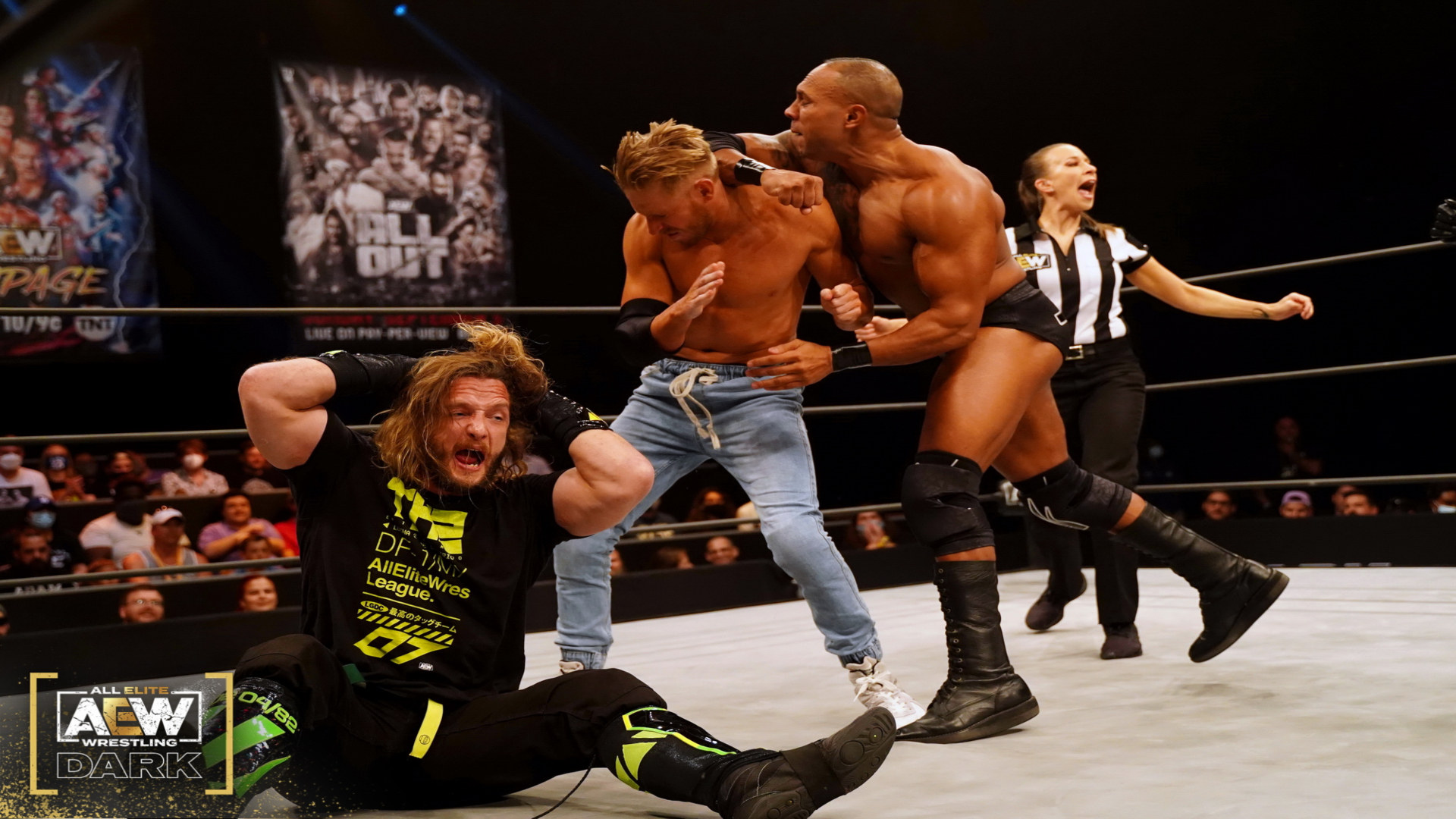 It’s a big night in pro wrestling sports fans! And no I’m not talking about Rainbow RAW, aka NXT 2.0, aka NXT 3.0, aka the NXT relaunch where Vince McMahon, Lucifer villain Brother Love and Kevin Dunn take all of Triple H’s hopes and dreams and leave him in the same state Angel found himself in when he learned Wolfram and Hart’s home office was Earth itself. What am I talking about then? AEW DARK FROM UNIVERSAL STUDIOS SON (AND DAUGHTER)! Yes AEW has moved Dark to a sound stage ala TNA Impact and WCW Worldwide/WCW Pro and at least through night one it is a great setting. Well lit, not too big, not too small, good crowd, slightly different look from Dynamite, Rampage and Elevation; what isn’t to like? Well I guess the fact that it was only an hour and most of the matches were squashes, but we can work on that right? Hey, at least they didn’t change Jack Evans’ name to Jolson Evee like Rainbow RAW turned Rex Steiner into Bronn Breaker. Was someone listening to Everclear’s “Santa Monica” when they came up with that? Who knows? Who cares?! Let’s review AEW Dark instead.

We began with a face to face promo between Jade Cargill and Leyla Hirsch backstage, with Mark Sterling throwing in some shots at Leyla along the way. The basic gist is Leyla is going to kick Jade’s ass, Jade is taking Leyla even more lightly than Florida State did Jacksonville State and we all know how that turned out in the end. This was the first of several segments between these two tonight and the first sign that an upset may be on the horizon come Dynamite tomorrow.

The Butcher & The Blade defeated Hunter Knott & Rosario Grillo after Butcher pinned Knott after the Neckbreaker/Powerbomb combo. Big Butch and the Blade were in and out here like me at a convenient store getting myself a Pepsi. I can say for a fact Knott and Grillo got zero offense and quite frankly I’m not sure Grillo even graced us with his presence. If he did make it into the ring then he suffered the same fate as Knott, which was getting bulldozed by Big Butch, slightly less bulldozed by Blade and then bulldozed again by Big Butch. A bulldozing all around as it were. * ½

Anna Jay defeated Ashley D’Amboise after submitting D’Amboise with the Queenslayer. This was disappointingly short given it was against AEW’s original top female prospect (Anna) going up against their newest in D’Amboise. I would’ve thought they’d get five minutes but instead D’Amboise got limited offense while Anna controlled the action and then locked in the submission for a quick win. After the match The Bunny, sans Penelope Ford, ran out to attack Anna, followed by Tay Conti running down for the save. So like Lucifer after it was kicked off of Fox, this feud will continue. * ½

Jeff Parker & Matt Lee (2point0) defeated Andrew & Erik Lockhart after Lee pinned Andrew following Two for the Show. We had another post match beat down here as Lee, Parker and Daniel Garcia beat down both the Lockhart brothers down afterwards, only unlike with Anna Jay no one came out to make the save. I would’ve thought Darius Lockhart, who was at these tapings, would’ve come out to save the guys with the same last name, but then again he’s great and these guys are regular old noobs. So why waste your time, you know what I’m saying?

This was solid pro wrestling. They may be noobs, but the Lockhart Brothers are at least talented noobs, and they got a lot more to work with than D’Amboise, Knott and Grillo did in the first two matches. Credit 2.0 (I’m not typing out the other way to say the name again) for giving them a bit in between getting their own stuff in. And that stuff looked good too! Between how sound they are, how entertaining they are and now the BTE exposure they’re going to get, it’s only a matter of time before Parker and Lee end up getting Dark Over over and become stars. More solid matches like this won’t hurt. ** ¼

Jade Cargill defeated Angelica Risk after pinning Risk with the Jaded. This match lasted about a minute and a half and was just Jade wiping Risk off the face of the earth. The story was after the match, where Mark Sterling cut a really strong heel promo on Leyla Hirsch, mocking her height, the fact that she’s lost high profile matches against bigger opponents (the Kamille match at NWA EmPowerrr) and that there’s no way she’ll beat Jade on Dynamite tomorrow. In other words, kind of making me believe Leyla is getting that upset win tomorrow! Match was not much but the promo segment was very good. * ½

Big Swole and Diamante both cut pre-taped promos, with Swole bragging about beating Diamante in the Three Strikes match last week and talking about moving onto what’s next. Diamante isn’t ready to move on though and said things will never be over between her and Swole. I’m not ready to say yes that this feud will continue but it cannot be discounted!

Fuego Del Sol defeated Mysterious Movado after pinning Movado with the Tornado DDT. Fuego is on a two match winning streak! This is like the moment in Angels in the Outfield…wait, why am I explaining Angels in the Outfield in a review? Let’s stop right there! This was a far different enhancement match than most on this show, mainly because Movado took most of the match! He dominated Fuego for long stretches of this match, which seems weird until you remember Fuego’s biggest strength is selling and getting sympathy. That’s what he did here and as a result Movado got to look pretty impressive before Fuego finally got control and put him away with a quick offensive flury. Nothing earth shattering but a solid, different match on this type of show. ** ½

Shawn Spears defeated Khash after pinning Khash with the C4 Death Valley Driver. This was some very nice, covert matchmaking on AEW’s part. For those who don’t remember, Khash is Invictus Khash, a guy who came up with Darby Allin in the Seattle, Washington scene and a performer who wrestled (and lost) to Darby in a really good Dark match not that long ago. And who is Darby wrestling tomorrow on Dynamite; none other than Shawn Spears!

Even separate from all that this was a pretty solid match that only suffered from a lack of time. As he was against Darby, Khash showed himself to be a really talented worker, and a second appearance makes me hopeful that AEW is going to keep bringing him back for situations like this. Spears was very sound himself, and he continues to be much improved ever since he ditched his bland “evil” persona in favor of becoming an over the top crazy man. Always better to turn up the crazy if you ask me, especially when it allows you to taunt your enemies while beating up their friends. Solid match. ** ¼

A GREAT pre-tape promo aired detailing the issues between Sonny Kiss and the Bad Boy JOEY JANELA! Sonny cut a nice promo on Joey, Joey cut a nice promo on Sonny and the latter vowed that this all ends next week. Considering this show was taped in Orlando a week ago and featured no Sonny-Joey match, not to mention that AEW is in New Jersey tomorrow (the hometown of both Sonny and Joey), I’m guessing this match will be seen on Elevation next Monday. Big Mommy Milkers will be packed for that one!

Chuck Taylor, Orange Cassidy and Wheeler Yuta (Best Friends) defeated Angelico, Jack Evans and Jora Johl (HFO) after Cassidy pinned Johl with the Orange Punch. Do you like fun? Do you like Jack Evans hitting the Ode to Blitzkrieg? Do you like Kris Statlander hanging out at ringside while wearing Orange Cassidy’s shades and Chuck Taylor’s biker jacket? What am I saying; everyone loves that! 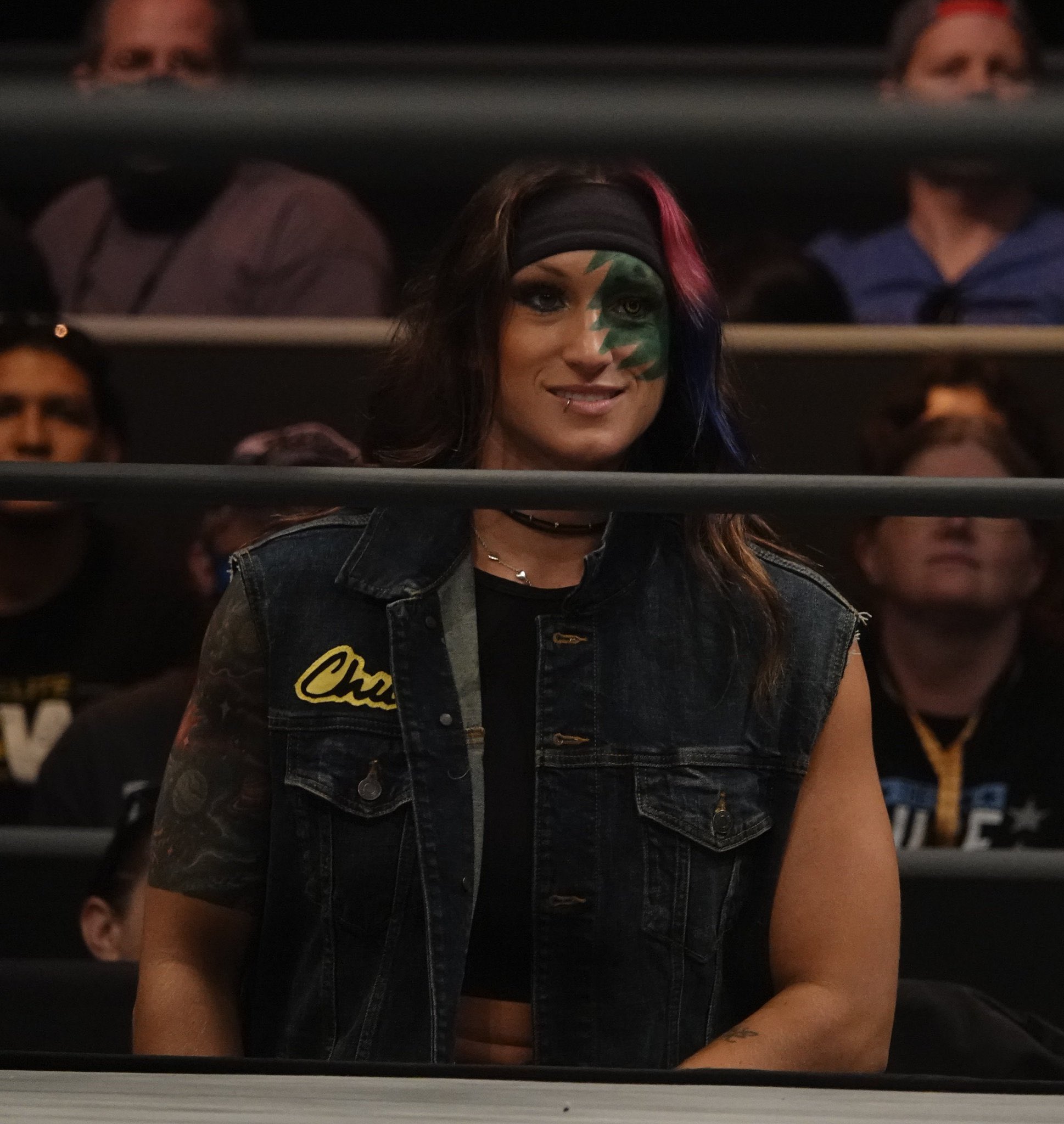 If you liked all the other things too then is the match for you! I mean it was also well worked too but those other factors are just as important. This was fleet, everyone seemed to be having a good time, the action was smooth (save for one Jack Evans springboard that Wheeler Yuta caught somewhat awkwardly) and did I mention the fun? The highlight honestly was the first few minutes between Yuta and Angelico, who put on a technical wrestling display that surely had Bryan Danielson calling Tony Khan to ask for a match with both of them. Everyone was good though, with Orange and Chuck delivering their usual quality, Jack flying around and Jora Johl fitting right into the proceedings. He’s been another strong find on Dark for AEW and it’s nice to see they’ve kept him around. Our first true good match of the night! *** ¼

Leyla Hirsch defeated KiLynn King after pinning King with a V-Trigger. This was an unexpected finish given Leyla usually wins with a Cross Armbar, and that, combined with a roll up spot that was slow to come together, did give the finish a bit of a flat feel. Other than that this was the best match on the show. It’s astounding to see how far these two have come since I first saw them, and Leyla was already a good wrestler when she first showed up on Dark. She’s since turned into a great one who can do anything you ask, whether it be fly (how about that is moonsault?), wrestle on the mat, strike and bully people around with suplexes. KiLynn King is an underrated powerhouse and Leyla was just tossing her around the way I toss my hat in the air when I can’t beat the latest Jet Set Radio level. It’s mightily impressive, arguably only topped by the gains King has made herself. She hung in with Leyla every step of the way, she looked smooth as silk (a big improvement from when we first saw her) and while she’s a great face, there is definitely something more dynamic about her taking on smaller competitors and using her strength to her advantage. Outside of the finish I thought they meshed well, both looked impressive, the pace was tremendous and the match was very good. An impressive win for Leyla going into that match with Jade tomorrow, which got a little more build in this last segment as the two had a pull apart brawl. *** ½

And with that I am off to watch the rest of Rainbow RAW! I kid I kid; I don’t hate myself. I think I will finish Jet Set Radio off instead so I can start playing Marvel’s Spider-Man tomorrow. TILL WE MEET AGAIN!