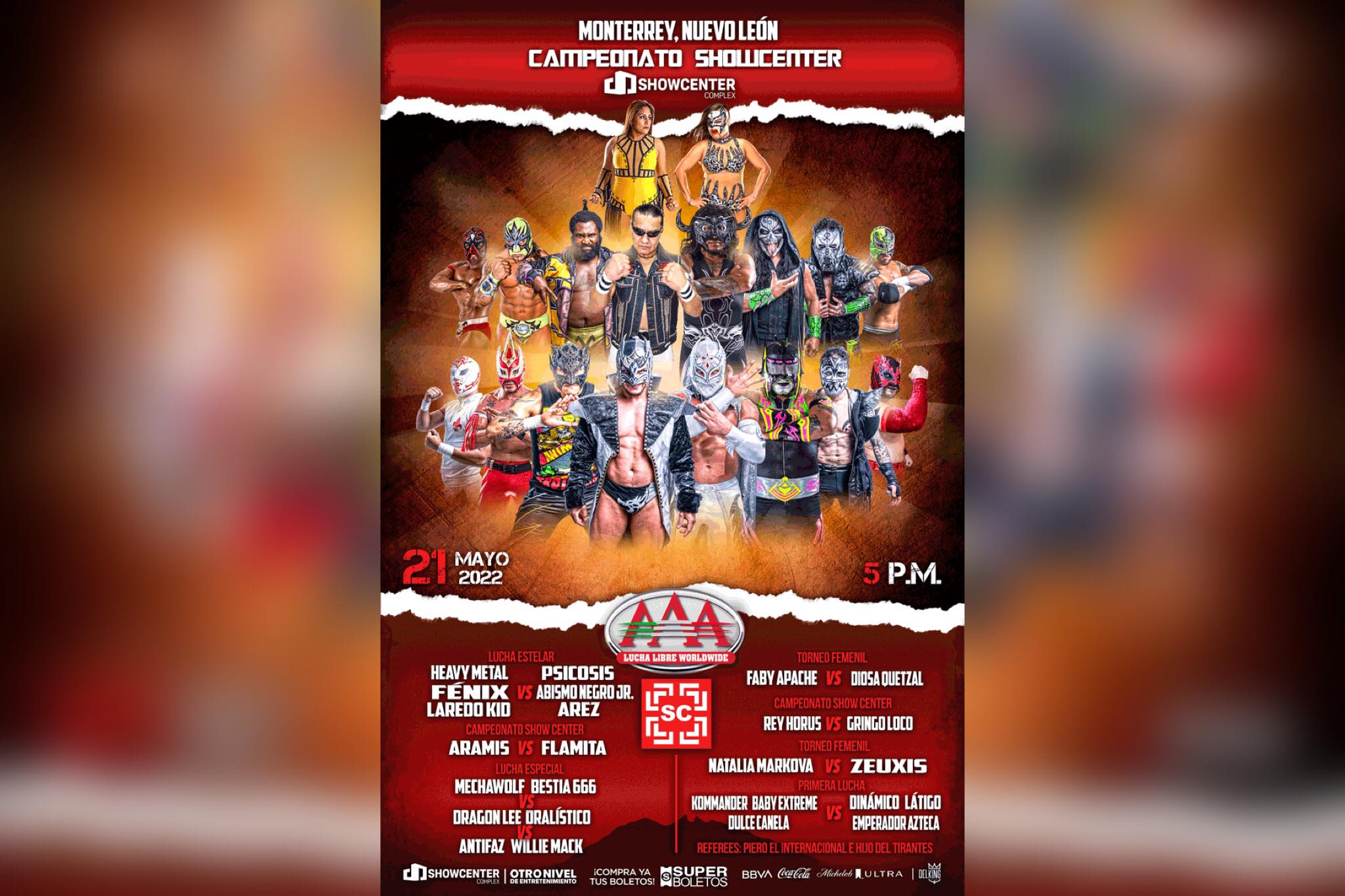 Remember that AAA show at the Monterrey Showcenter Complex (the second show AAA has run there this year) that was supposed to air live last Saturday? Well guess what; it aired (not live) this Saturday instead. Well, some of it at least; have to save the rest for next week! I have no idea what the decision-making was behind this move but either way, I got to watch some lucha libre tonight and that was a good thing. And this show was a good one overall, although it was kept from reaching stronger heights due to some slight disappointment in the opener and some coasting from a veteran performer in the main event. Such is life I suppose. In any event, let’s review so I can go do…whatever. Take MJF’s place at a fan fest? The world is my oyster after all!

Baby Extreme, Dulce Kanela, and Komander defeated Dinamico, Emperador Azteca, and Latigo after Kanela pinned Azteca with a splash. This was your typical all action all the time AAA opener, although I have to admit it was missing a little something. I think I may have been expecting a bit more from Komander, who has breakout potential that he’s shown on AAA programming previously. Here, like Jeff Bridges, he was just a dude; he still did some cool shit, but he also disappeared into the background at times and his big moments didn’t pop as much as usual. I think that missing dynamic made this match a tad bit disappointing for me, even though everything else largely worked. Baby Extreme was appropriately extreme (frankly he seemed to be the showcase guy with all the shit he got in), Kanela was extremely over and looked impressive, and all three rudos did a good job basing, getting some high flying in of their own and in Dinamico’s case looking like the total package. Easy to see why AAA is high on that dude; he’s like La Mascara, except more charismatic, better looking, and just better. In any event, this was an eventful, good match that I think could’ve been a bit better. *** ½

Zeuxis defeated Sussy Love after pinning Love with a Top Rope Spanish Fly. That’s right sports fans; this is not a mirage, this is real. I AM REVIEWING A ZEUXIS MATCH YET AGAIN! How many years has it been now? However long it’s been, it’s been way overdue for me to see Zeuxis knee someone’s head into the first row again and you better believe I was acting like Connor McDavid after that overtime game-winner when I saw it.

Even better than seeing Zeuxis’ corner knees was seeing she hasn’t lost her touch. This was a very good match, especially given that it wasn’t the original match scheduled. Sussy Love was a replacement for Natalia Markova, and you wouldn’t have noticed because this match was worked like it was always supposed to be seen on this show. It wasn’t perfect, with a few iffy moments here and there and some situations where things could’ve gone smoother. But for someone I’m largely unfamiliar with, Love looked like a pretty well-rounded performer capable of some good strikes and decent athleticism (both her dives looked good). And Zeuxis was Zeuxis; she hit hard, she wrestled well, she hit the knee strike and her athleticism seems to be at the same level it was when she was the best luchadora in CMLL a few years ago. A strong effort from both women, and I’d honestly put this above the previous two AAA luchadoras matches we saw at the Showcenter back in March. *** ½

Hey, it’s AEW star Fenix! Fresh off owning The Factory on AEW Dark, Fenix came out here to cut a promo where he thanked Marisela Pena Roldan (who gave him the death stare; SHE HASN’T FORGOTTEN ABOUT THE DIVE FENIX!), the Showcenter shows, and then, finally, call out Arez. And so Arez came out, leading to Fenix trying to convince Arez (much like he did in that TripleMania XXX: Monterrey promo floating around) to leave Los Vipers behind and come hang out with him, Pentagon and Taya instead. He even referred to Arez as “familia” for crying out loud. Talk about a hard sell. All this then prompted Abismo Negro Jr., Latigo, Psicosis, and Toxin of Los Vipers to come out and berate Arez over even considering this. Eventually, Fenix attacked all of them, got overpowered, and then got saved by Laredo Kid running down for the save, all while Arez watched. In the end, we learned Los Vipers is even angrier with Arez than before, he still has no idea what to do and Fenix and Laredo Kid can beat up Los Vipers all by themselves. Frankly if I were Arez, that be enough for me to switch sides. Well, that and I wouldn’t lose all the damn time.

Faby Apache defeated Diosa Quetzal after pinning Quetzal with a Dragon Suplex. I was looking forward to this match a lot due to Quetzal, a long-time indie luchadora who has really improved over the years, finally getting her shot in AAA against an opponent in Apache who remains one of the best women’s performers when she wants to. And therein lies the problem; Faby did not want to be that performer this evening. She was there in body, but in spirit, she may as well have been in Madison Square Garden watching the Zombie Whalers get obliterated in the first period.

Scraping the bottom of the barrell with this one!

I don’t know what the issue was, but you could tell from the early stages when Faby was laying into Quetzal in the corner with some boots that were a little too stiff that maybe this wouldn’t be the night for a classic Apache performance. And it wasn’t; she spent the rest of the match going through the motions, doing the bare minimum, and at times didn’t even seem to want to get up for Quetzal on moves (like whatever that Backcracker in the ropes spot was supposed to be). That left Quetzal to carry things and she did her best, hitting a few cool dives and working hard, but there was only so much she could do. It wasn’t like this was a disaster mind you; it still turned out to be a solid match, mainly because Faby can have those on autopilot with anyone decent to good (which Quetzal is). But I had expected this to be a nice mix and match of Faby’s striking against Quetzal’s athleticism, and instead, we got the latter going up against an Apache who seemed bored. A disappointing end to the show. ** ½

And I’m spent. Provided there’s a review of the next part of the Showcenter show next week, you will see me then sports fans. TILL SAID TIME AND PLACE!