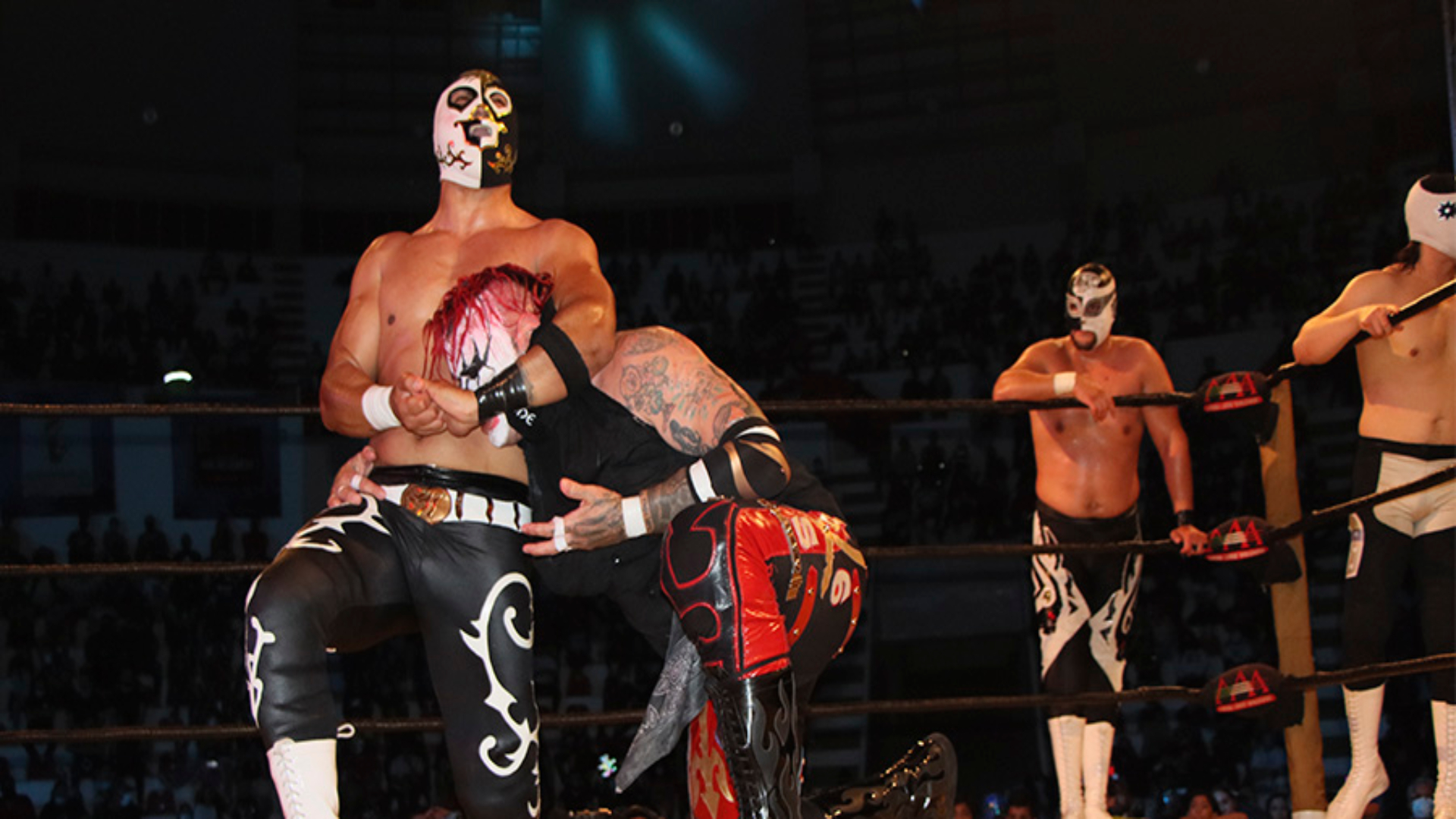 You may or may not have noticed sports fans (and let’s be real, you probably didn’t notice) that last week, at the conclusion of my last review of Lucha Libre AAA (ON SPACE!!!) I said I’d be reviewing CMLL’s Homenaje a Dos Leyendas this week, only for there to be no review of the show. What gives? I’ll tell you what gives; life! As it turns out I had more writing projects to do this weekend than expected, and given the choice between adding more to my plate like a Luchabag and H2L review or getting those projects done and taking it easy, I chose the latter. And let me tell you now, I have no regrets, especially since I spent all of Saturday moving boxes and the largest mattress in the history of the western hemisphere to help my brother out. So there’s why there was no CMLL review; there’s always the Aniversario! On the plus side, I did watch Lucha Libre AAA’s fun show on Space tonight and reviewed that. So there’s your make up review right there! Now let’s review so I can get back to that sweet relaxation.

Argenis and La Parka Negra are upset about…something? I presume it’s Myzteziz Jr. still; you know that Argenis can’t stand him, no matter how many times he beats Myzteziz Jr. and bores us all while doing so. In any event, he and Parka Negra shook hands and agreed to be pals in regards to this matter, whatever it may be.

Mr. Iguana, Myzteziz Jr. and Octagon Jr. defeated Flamita, Latigo and Toxin after Octagon Jr. pinned Toxin after a Split Legged Moonsault Side Slam. Yes, it is exactly what the move sounds like and yes, it’s as awesome as you’d expect. Well other than the part where Los Vipers continued to lose more than the 2021-22 Montreal Canadiens. Even the return of Cibernetico can’t turn the tide.

This was a match that I felt was good for the vast majority of it, and then it got really good in the final few minutes thanks to the finishing sequence. It’s not that there was anything wrong with the match; all six guys were working hard and there was some legit good stuff, but the high octane memorable moments all seemed to occur towards the climax. Hey, I guess that’s what you want if you’re putting a match together right? I think the issue is my standards are so high for guys like Iguana, Octagon Jr. and especially Latigo and Toxin these days that when they’re just doing good wrestling and not innovating, it feels like a let down (and this wasn’t a let down). Like I said though, the stuff at the end was tremendous from both sides and the overall action was good, with Flamita continuing his streak of strong performances without losing the rudo edge he developed in ROH. I wouldn’t call this a great match, but the end was enough to get it close to it. Oh, and in case your wondering, guess who attacked Myzteziz Jr. at the end of the match? You guessed it; Frank Stallone! But seriously, it was Argenis and La Parka Negra.  *** ¾

Heavy Metal & Laredo Kid defeated Abismo Negro Jr. & Gringo Loco and Bandido & Jack Cartwheel after Laredo Kid pinned Abismo Negro Jr. with a Laredo Fly. Heavy Metal, who appears to be back in Lucha Libre AAA on at least a semi-regular basis, replaced Hijo del Vikingo in this match, and it’s a small mercy he did because my brain may have exploded if Vikingo had been involved with the rest of these maniacs. This was pure Lucha Libre AAA insanity right here, of the good variety. Heavy Metal was the only one in this match generally taking it easy, and that’s a given considering he’s in his early 50’s. Everyone else though? NUTS! Bandido and Laredo Kid worked at their usual high level, complete with springboard tornillos and Shooting Star Presses, while AAA newcomers Gringo Loco and Jack Cartwheel made tremendous impressions in their Lucha Libre AAA debuts. Both guys have been impressive outside of Lucha Libre AAA (Loco in particular has been a sleeper Wrestler of the Year candidate this year) and they basically gave you the best version of themselves elsewhere, with Loco providing his usual god tier basing and underrated high flying, while Cartwheel broke out so many rad moves, including a launching Sasuke Special spot with the help of Bandido. As great as everyone was though, Abismo Negro Jr., to me, ultimately stole the show. It’s taken awhile, but the man has finally gotten comfortable in this gimmick, and he was absolutely tremendous throughout this match, especially when doing teamwork with Loco. That’s a pairing Lucha Libre AAA should bring back for more matches like this. This was GREAT. **** ¼

We got brief promos from both the NGD and from Black Taurus. I know; I was surprised to see Taurus did more than just scream too.

Cuatrero, Forastero and Sanson (NGD) defeated Chessman, Pagano and Psycho Clown after Cuatrero pinned Pagano with a springboard splash. For those of you keeping score at home, that is the third straight Lucha Libre AAA show with all clean finishes and no interference following a Rey de Reyes event that had more run ins than a 1997 WCW Monday Nitro episode. Somehow, someway, Lucha Libre AAA learned all the right lessons from that shit show! Now if only the Dinamitas could learn how to be an energetic, fun unit again.

The Dinamitas, nearly every single day of the year

This was a good match despite the fact that only one team seemed to give a damn about it. You know the story on the NGD by this point sports fans; Cuatrero, Forastero and Sanson are all really talented luchadores who have been somewhere between cruise control and the snooze button for the last few years. There’s been signs of them breaking out of the funk in Lucha Libre AAA, but all too often they remain as patterned, bland and lethargic here as they did in CMLL. Tonight’s show was no exception; their heat segment was so predictable that I was fighting off the urge to watch random videos on YouTube. In the hands of a less over lower card team that may have spelled disaster, so it’s fortunate Chessman, Pagano and THE ACE were here to bring some life. Chessman may be getting older and Pagano will never have the natural talent any of the Dinamitas have, but they both ALWAYS work their asses off and put in a sublime effort here, especially in the latter half. And of course Psycho Clown brought it, as if you even had to ask. If one could put together the charisma of Psycho, the effort of Pagano and Chessman and the talent of Cuatrero, Forastero and Sanson into one luchador, you’d have the perfect performer. Alas, for whatever reason, the Dinamitas are unwilling to give a consistent effort to reach that goal. It’s fortunate they were with a strong enough team tonight that their match still wound up being worth watching. *** ½

There you have it sports fans. I’m off to play some Uncharted: Drake’s Fortunate and maybe eat a piece of cheese. I’ll see you next weekend for some more Lucha Libre AAA though. TILL THEN!