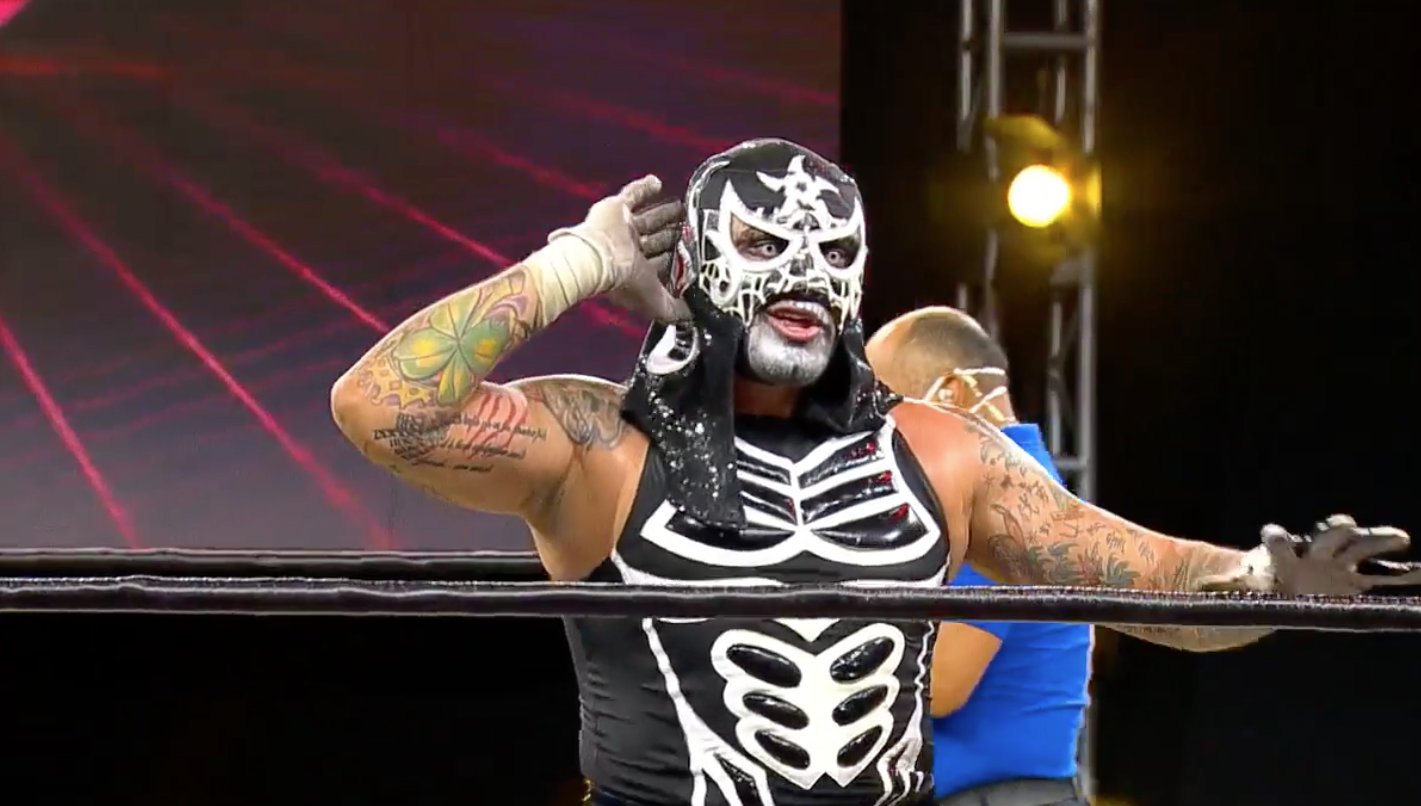 Tonight’s edition of AAA’s Lucha Fighter, the semi-final edition as it were, was dare I say the weakest show AAA has put on since returning a few Saturday’s ago. Of course it also had the best match of the competition and several quirky moments so it was still overall a highly entertaining show! Dives happened, Pagano nearly killed himself, ring ropes, microphones, locker rooms and luchadores were all properly sanitized; it was very much an AAA Lucha Fighter episode. And to think we only have one more last week. What a pity. And on that sad note let’s review.

I must admit sports fans that I could barely pay attention to this match; I was too distracted by AAA piping in crowd noise to make it seem like fans were at the show! Someday someone is going to have to explain to me how all these other promotions got the empty arena shows so wrong while AAA got it so right, first with the safety features and then in piping in crowd noise (in fairness, AAA stopped after this match so we can’t give them too much credit). It’s more unbelievable than Sonic the Hedgehog actually being a good movie!

As I was saying, all of that kind of distracted me from what was going on in the ring. Then again it’s hard to pay attention to a Big Mami match in this setting. Grodd bless her but Mami is someone who needs a real crowd to effectively use her charisma; here she just looks slow and plodding. Thus it was quite a good thing that La Hiedra won this match as she’ll have a strong performance in the finals next week where it would’ve been a challenge otherwise. So yeah; right result, match was okay I guess. Again; the crowd noise got to me!

Some higher power is definitely looking to affect my attention span during this show because my stream during this match was going in and out more than Stewie Griffin in the sack. I appeared to be the only person I knew having these problems as well so…yeah. What can you do?! What I did see of this match was pretty good, though it appeared to mostly be Lady Shani just owning Lady Maravilla every chance she got. That’s alright because Shani is great, she got to kick Maravilla in the head and do a lot of cool submissions; what more can one ask for? We also got a post match Maravilla attack that led to Big Mami running out to make the save, so it looks like we’ll have something with those two rivals next week. A fine effort from what I saw, but damn do I wish I had seen more.

If you were looking for a rematch of the classic Triplemania XXII mask vs. hair match these two had…well you were looking in the wrong place sports fans. If you were looking for an overall good time though this match was a big success. For me personally it was the first match where I wasn’t distracted so that was a huge plus. Beyond that though it was just really well done. They built the match early around our lord and savior Psycho Clown getting a lot of cool dives in, and then switched it up with Texano working over Psycho’s arm. It was great stuff, both because Texano attacked Psycho’s right arm viciously while Psycho SOLD THE SHIT OUT OF IT! Selling isn’t what I’d normally call Psycho’s strong suit but he did it tremendously here, built a nice comeback around it and ultimately pulled out the win with a Canadian Destroyer before going right back to selling! Very strong stuff there. Perhaps it wasn’t as good as the best work these guys could do but for the time they got I thought this was very good and very effective, especially if Psycho carries the injury over into the finals.

I don’t even know what to say sports fans. I’m not sure what surprised me more here; the fact that Chessman actually won this match or that Pagano attempted, wait for it, a BRILLO DORADA and not only didn’t kill himself on the attempt but actually hit it. Uwe Boll could make a competent video game adaptation and I wouldn’t be as stunned as I was watching that.

If you put your ear to this, you can hear Mauro Ranallo screaming “WHAT THE HELL?!:

To be clear, Pagano should never, EVER try that again (a few inches was the difference between Pagano hitting this and being stuck in a wheelchair for forever) and this was nowhere near as graceful as Máscara Dorada or Aerostar’s version of the move. Never the less I’m going to give Pagano credit here; it takes HUGE balls to try that when you have the athleticism of a DVD player and in typical Pagano fashion he just went out there, did it and it paid off. Props should also go to Chessman as well, who legit saved Pagano’s life with the catch. This moment really made the match as the rest of it was fine, but nothing you haven’t seen before. There was some brawling, there were some hardcore spots, there was Pagano doing his usual stuff and in the end Chessman got a well deserved win to go to the finals. A forgettable match with one unforgettable spot.

No sports fans, this match was an all around display of greatness, even more so than that excellent LA Park-Laredo Kid match we got one week ago. It was two guys in Pentagon and Vikingo, in a situation where they didn’t have to, bringing their A-game and delivering a match that was great action, great intensity and moves that no one had ever seen before. Like what you ask? Try Vikingo doing a Springboard 450 FROM THE SECOND ROPE! I’ve seen Vikingo do spectacular things but that…that is up there with some of his best work. 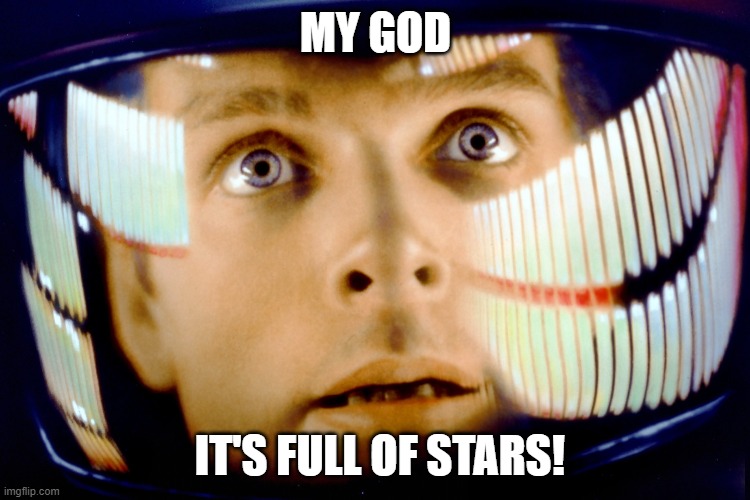 Between all that was a ton of other dives, Pentagon reverting back to his season one Lucha Underground character of being a vicious bad ass, a tremendous slap fight on the apron, tons of moments worthy of the Batman “my God!” gif and more. I’ve seen Vikingo better (particularly in the Laredo Kid match) but not by much, and Pentagon hasn’t looked this good or this motivated in singles action since the LU days. Absolutely spectacular stuff. Easily the match of the competition to this point and one of the best empty arena matches ever; a lucha libre tour de force.

There really was only one way a show that started with canned crowd heat, featured a Pagano Brillo Dorada and Pentagon vs. Vikingo could end; with LA Park beating Wagner clean in a seven minute match. When things are weird you just gotta go with it and that’s what AAA did here. Obviously Park and Wagner going seven minutes wasn’t going to come close to their best efforts and thus this match felt more like Wagner vs. Blue Demon Jr. from Invading NY than the usual Wagner-Park affair. They did some solid mat wrestling, a few other things and then Park just speared the shit out of Wagner to get the win. There wasn’t anything wrong with it and I have no issue with Park moving on, nor do I have a problem with the length given how this whole competition was taped and whatnot (with Park obviously suffering his injuries at one point). In the grand scheme of things though this will definitely go down as the least memorable match in the history of the Dr. Wagner Jr. vs. LA Park rivalry. At least we have a thousand other great matches between them to watch though.

And with that I’m off to do something else. What will it be? In the words of Lex Luger, I DON’T KNOW! Till next time, VOTE ON LUCHA MADNESS BEFORE THE SWEET SIXTEEN POLLS CLOSE! 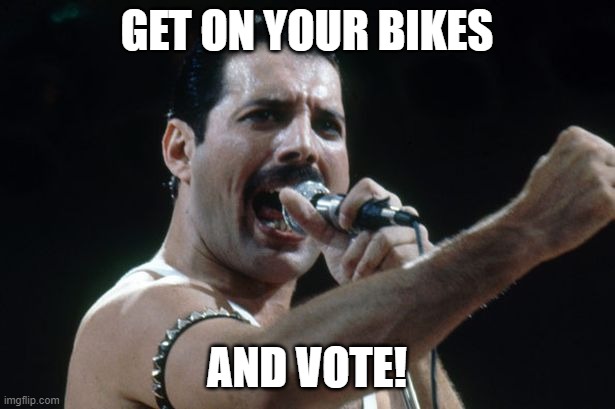