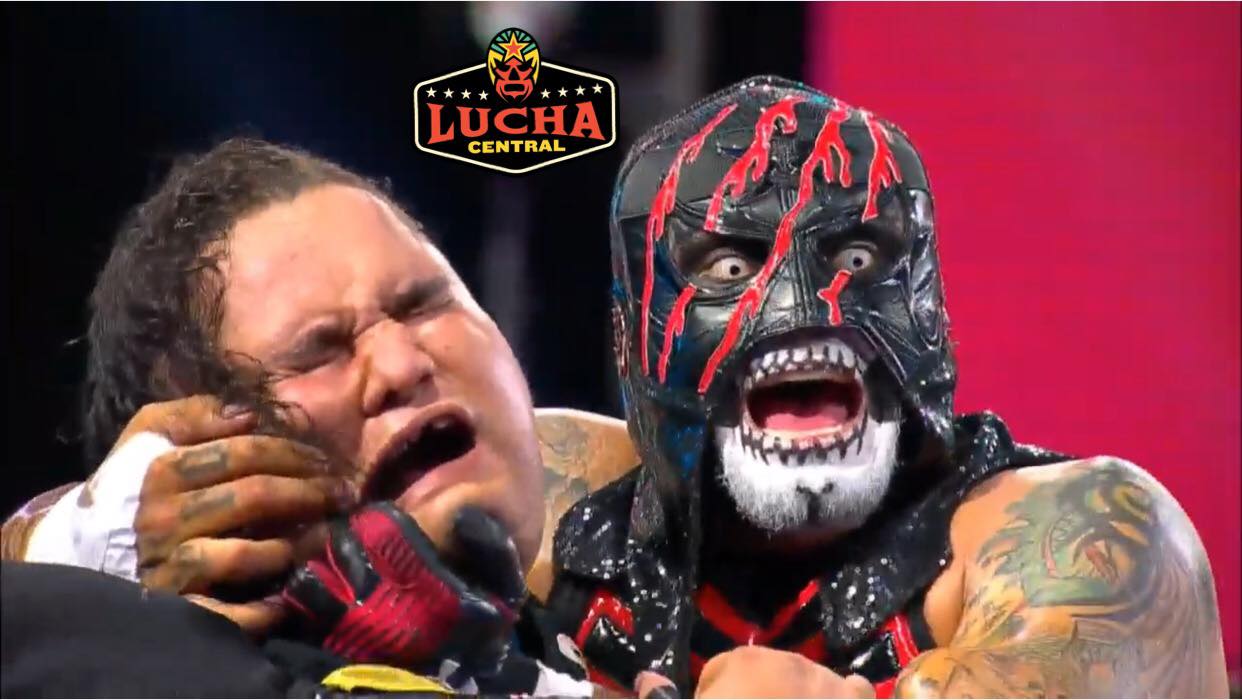 If you thought the first week of AAA’s Lucha Fighter competition was delightfully strange, WAIT TILL YOU GET A LOAD OF THIS SHOW! Night two (which you can watch On Demand by clicking THIS LINK!) actually seemed tame at the start save for the arrival of Pentagon Jr. Then LA Park showed up. Then Laredo Kid showed up to face him and they tore the house down. And then in the main event Pentagon came out to wrestle Niño Hamburguesa! Throw in the fact that we once again got plenty of shots of AAA fumigating the arena (and locker room), the AAA soundstage giving off a semi-outer space vibe (hey; maybe that’s where they’re doing the show!), the cameramen and the hazmat suit guy openly cheering for certain luchadores and the hazmat guy sanitizing the microphone so much that he got just as much of a workout as the luchadores and well, this was as AAA as it’s going to get. I had an amazing time. Let’s now relive the good, the bad, the weird and the great!

Someday someone is going to have to explain to me why this match opened this show. This is what people in the business call not very good! It’s not that surprisingly honestly. Vanilla has improved a ton but she needs the right opponent to truly succeed, while Big Mami is great…playing to a full arena of people. This was an empty arena and thus the magic of Big Mami was lost, leading to a lot of very slow and sloppy lucha in between a few nice dives from Vanilla. It honestly wasn’t as bad as I was dreading, but it was still about 3,000 miles west from good. At least we got some continuity in Lady Maravilla coming out to attack Mami after the match (with Faby Apache coming out to make the save). And yes, for those wondering, Maravilla’s hair is still short. I’m just as confused as you are.

Alright now I’m not confused about the short hair sports fans. Lady Maravilla looked like such a bad ass walking out for this match with the short hair that I’ll be stunned if she isn’t given her own action move afterwards. You’re telling me there’s no room for Maravilla as the lucha libre version of Eleanor Ripley?

Seriously; look at this and tell me Lady Maravilla couldn’t defeat a Xenomorph. You can’t can you?!

Unfortunately this match wasn’t as cool as Maravilla’s look. It wasn’t bad mind you; Keyra’s dropkick in the corner was as awesome as it was deadly (how Maravilla wasn’t knocked out is beyond me) and there were several nice sequences. The problem is I’ve seen these two go at it several times and they’re far more capable than this. It wasn’t the empty arena playing into this either; there was just something off between the two throughout the match, perhaps having to do with Maravilla sounding completely gassed when she was cutting her pre-match promo. Whatever the reason this match was just kind of okay, bookended by Big Mami coming out afterwards to get her revenge on Maravilla and continue that feud.

Now this is more like it! I really liked this match and that’s despite the fact that it felt like the ending was a bit of an anti-climax. Unlike Maravilla and Keyra, who seemed to take it easy compared to usual, Shani and Faby (making her first AAA appearance in quite awhile) worked this like it was a continuation of their issues from a few Triplemania’s ago. There was some really stiff kicks, some great all around wrestling and Lady Shani doing her usual maestra stuff to great effect. There was an iffy moment when Faby went for a hurricanrana on the floor but besides that the only quibble I had was with the end. Perhaps it’s just me but these two were rolling and a few more minutes would’ve made this a really great match. Instead it wound up being a borderline great match, easily on par with what Hades and La Hiedra gave us last week.

My what an enjoyable romp this was. For one we got the cameramen and the hazmat suit guys randomly chanting for Chessman throughout, which amused me far more than it probably should have. Then there was Chessman breaking out the cookie sheets, because it’s AAA and a show without cookie sheets is like a world without string; CHAOS! After that everything was still really good. Myzteziz Jr. can be really great and he was up to the task here with a nice tornillo and even a springboard Dragonrana (only his 450 really needs work). Chessman meanwhile was in fine form; he’s really great when he’s on and he was on here with his basing and some nice punishing offense. I’m a little surprised he won given Myzteziz offers a more exciting matchup but given that Laredo Kid ran in after this match perhaps they’re going with Chessman-Laredo. Works for me! So did this match as it gave us a good time and, in addition to the Laredo run in, a Carta Brava Jr. appearance. One can always do with more Carta Brava Jr. sports fans.

Do not scratch your eyes; that is a real match that really just happened an OH MY GOODNESS WHAT IS GOING ON HERE?!

My Grodd did I love this match. If ever there was proof that you could put LA Park anywhere (a sold out crowd, an empty arena, my father’s living room) and he’d deliver, this was it. He was LA Park from the moment he walked out to the moment he nearly had one of the commentators nearly running for the hills. He was dynamic, out of his mind and just a complete and utter sight to behold, as he always is. I think you could’ve put him against anyone here and it would’ve been money. Fortunately they put him with Laredo, who is off the charts himself, and he was more than up for the challenge of standing toe to toe with Park. Hell he also got some practice for that match with Kenny Omega by taking, and this is true, SOME LA PARK V-TRIGGERS! And they were TREMENDOUS V-Triggers too! Perhaps we’ll get Park vs. Omega at some point too? COULD YOU IMAGINE?! Perhaps we can focus on that on a much saner evening. For now let’s just soak in this awesome match, easily the best of the competition thus far and one of the best empty arena matches you’ll find these days.

This was a match where the luchadores (and AAA) realized they weren’t going to touch what just happened and chose to keep things as quick as possible. A wise decision because there’s no universe where Pagano could match what LA Park and Laredo Kid just pulled off. He was game as usual and Octagón Jr., who quite frankly deserved better, had a few nice moments, but the talent level and time restrictions just weren’t on the level of the last match. Not to mention that I’m sure several people (myself included) were still buzzing from the last bout and thus couldn’t really focus. In the end it was forgettable, but it did its job and gave us more Pagano-Chessman stuff because AAA is still trying to build feuds during these shows. ONLY IN AAA!

In case it wasn’t clear from Dr. Wagner Jr. vs. Mr. Iguana and LA Park vs. Laredo Kid that the universe was upside down, tonight AAA decided to close the show with this match; Pentagon Jr. vs. Niño Hamburguesa. To think all it took for these mind melting matches to happen was a global pandemic. I shudder to think what AAA would do during the apocalypse; LA Park vs. Rush? ATLANTIS VS. SANTO?! Keep it together Cult!

Back to the match! This was not LA Park vs. Laredo Kid sports fans but it was a solid Uncharted 3 to that match’s Uncharted 2. I think it’s well documented that Pentagon oozes charisma on a normal day but boy did he ooze it here in a rudo sense; he had so many giffable and memeable moments from his facial expressions alone. He also looked like he was having a ton of fun playing a bad guy reminiscent of his LU days, playing up his vicious streak and brutally mauling poor Hamburguesa. To his credit he also allowed Hamburguesa a ton of shine and the youngster, in probably the biggest singles match he’s ever had, was mightily impressive. At his size there will be some things Hamburguesa just can’t do compared to others, but he worked his ass off here, pulled off some pretty impressive moves and hung with Pentagon, one of the best luchadores alive, every step of the way. Hopefully AAA recognizes how well he did (and how well Pentagon put him over, both before and after the match) and gives him more opportunities going forward. A borderline great main event to close what was one hell of a show once LA Park walked onto the sound stage.

And with that I am off to watch TV! Will see you tomorrow for the opening of the Round of 32 for Lucha Madness sports fans. TILL THEN! 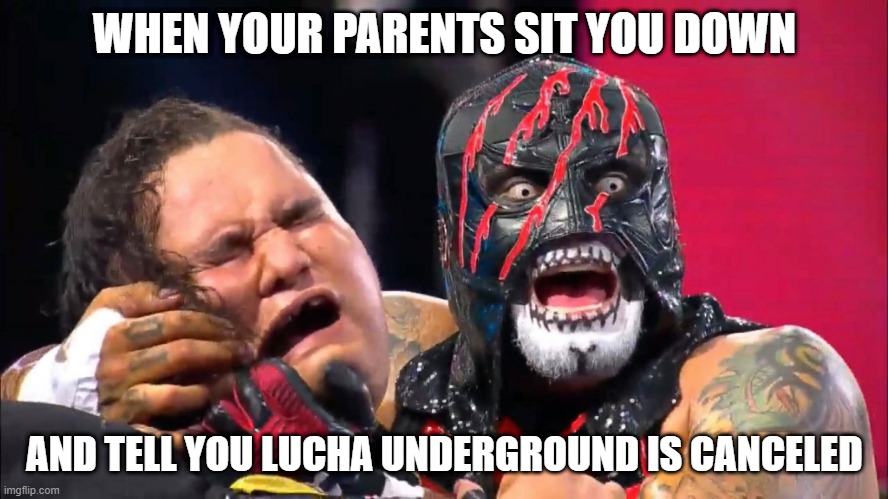