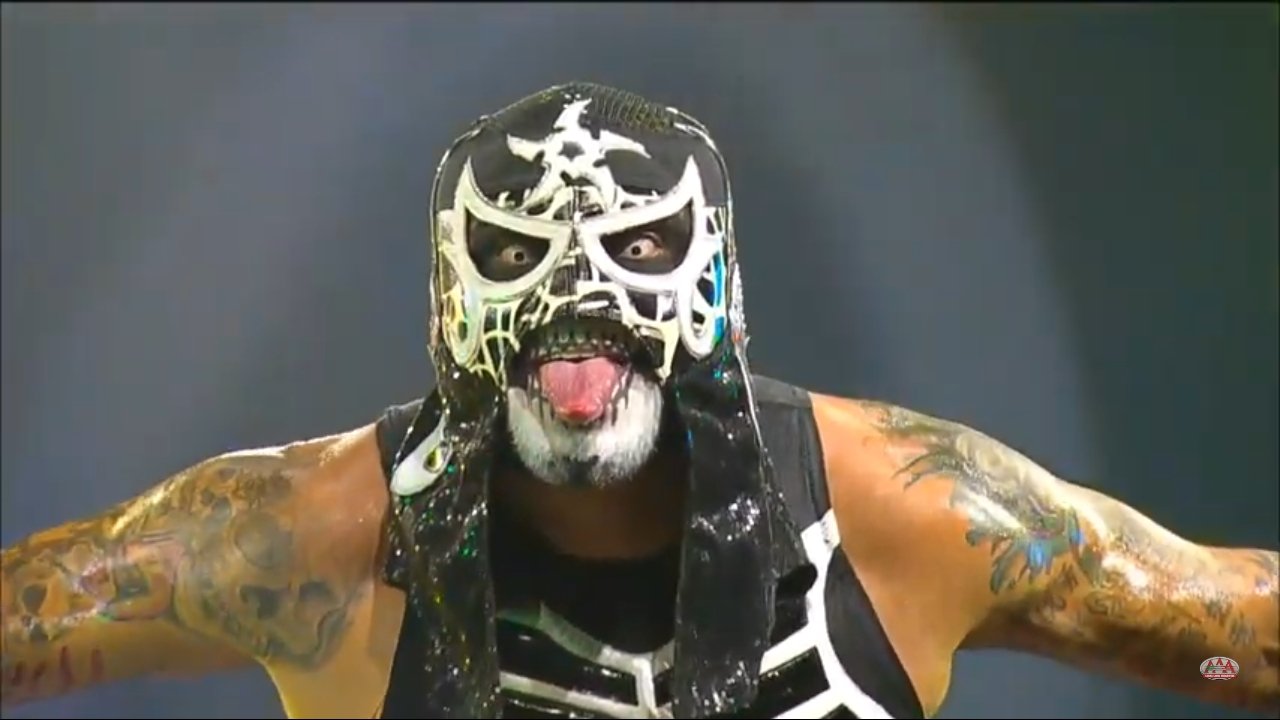 My fellow lucha fans; Lucha Libre AAA’s Lucha Fighter competition has come to an end. On the one hand I’m sort of sad about it but on the other hand it means that everyone can go home, lock it down for a little bit and stay safe during this pandemic, taking solace in the fact that they delivered a very fun few weeks of shows. Tonight was no exception, even if it wasn’t the complete home run some of us were expecting. In fact there were two matches that dare I say disappointed, including the biggest one that was advertised going in. Fortunately Lucha Libre AAA redeemed it all thanks to a strong luchadoras final and a main event that will definitely be remembered for a good while, both for its quality and for who was in it. So who exactly was in it? You’ll just have to read to the end of this review to find out. Let’s jam.

This was…fine I guess? I’ll be honest sports fans; I was expecting a bit more right here, both because Dinastia and Laredo Boy are better than what they showed and because I expected there to be more time. Instead it seemed to go about six minutes and then Dinastia finished not Freelance off with a springboard corkscrew splash. It wasn’t terrible by any means; Dinastia had some cool dives and there wasn’t anything I’d call sloppy. Even still it felt like these two didn’t have enough time to really get going and they didn’t seem to click all that much in the time they got. All things considered, this was a bit of a disappointing start to the show.

Let’s start with the good news sports fans; THE ACE MADE THE FINALS! And yes I was worried about that happening during at least one or two Chessman near falls. In fact, here’s what I looked like during those near falls.

That and the finish to this match aside (THE ACE didn’t quite get all of that Code Red) I enjoyed this match far more than the opener. It was a little basic at the start but it all changed after Psycho went crazy with his flip dive off the turnbuckle pole. After that it was all very good. THE ACE was working hard in what would be his first of two matches tonight and Chessman continued his solid work in this competition with another strong performance. I do wish they had done a few more things they’re capable of (they left the slingshot rana in the bag) but overall this was a fun match where the right guy won.

Well…at least we have the two MLW matches! Boy was this a disappointment sports fans and it was precisely because of how it was booked. There’s overbooking, there’s extreme overbooking and then there’s this match. There were certainly some moments of brawling where L.A. Park Vs. Pentagon looked like it was going to be really good, but it was all canceled out by the decision to make Piero a rudo referee and having him involved in way, WAY too much of the match. I’m guessing that was so Lucha Libre AAA could get out of this without L.A. Park taking a clean loss but boy did it hurt this match something fierce. And to think that this match was the big reason that people were tuning in! Thank Grodd this show is free because otherwise this would’ve been a bigger waste of money than buying a ticket to see Electra in theaters. L.A. Park and Pentagon have had better matches before and they’ll certainly have better matches than this going forward. The biggest disappointment on the show.

You know what was needed after that last match? Lady Shani coming out, doing her maestra stuff and KICKING LA HIEDRA’S HEAD ALL THE WAY TO GUADALAJARA! How good was this boot to the face sports fans? Not only will I be showing it to you here momentarily but AAA freeze framed it on Twitter and then showed at least three different angles of it on the replay! Not since Zeuxis’ knee strike has an attack to the face been so violent.

That was the best part of the match but everything else was very strong as well. It’s nice when things you expect to be really good are really good! I would’ve maybe given La Hiedra a little more to do than just take punishment but she took the punishment well, showed some nice resilience and her moments on offense looked really good. This was Shani’s show though and whether it was the kick or the many moments of brilliance on the mat, she was out there to steal the show and did just that. You can see why Lucha Libre AAA likes to have her win all these competitions; she’s really good! Hopefully this now gets her that long delayed match with Taya once this pandemic eventually calms down. Till then we can at least enjoy the memory of this, a really REALLY good match that I dare say was borderline great.

I know it’s hard to believe given that the world is like the Hoth level in that one Star Wars game right now, but sometimes dreams do come true. Sometimes the girl you’re nuts about does like you back, Francis Ford Coppola does decide he wants to make Megalopolis after all and Lucha Libre AAA does book Pentagon Jr. Vs. Psycho Clown in a match that makes you go to Google for the first Matt Hardy gif you can find.

The only thing that could’ve made this match better is if it had a live crowd watching, and hopefully Lucha Libre AAA gives us a chance to see this match in that scenario when the world finally gets its shit together. Otherwise this was everything you would’ve wanted a match between the Lucha Underground Ace and the Lucha Libre AAA Ace to be. They were both motivated to have a great match, worked a perfect pace, had some sequences that even I didn’t think they were capable of (the stuff they did leading into Psycho’s Canadian Destroyer in the final third of the match was super) and most importantly there were no shenanigans of any kind like we got in the Pentagon–Park match! It was simply two big stars working at a high level in a match that legitimately felt like a big deal. And it was. It certainly should go down as a big deal for Pentagon, who not only got the win (clean may I add) but got Psycho with the arm breaker in the process. At the end of the day Pentagon had a strong performance on every single one of these Lucha Fighter shows, he had the match of the tournament whatever way you slice it (it was either tonight’s match or the Vikingo one) and even though one had serious overbooking, he beat L.A. Park and Psycho Clown ON THE SAME NIGHT TO WIN IT ALL! If ever there was proof that Lucha Libre AAA is taking Pentagon Jr. as serious as possible, it was all on display tonight. What a tremendous final to this competition and by Grodd I hope we get to see these two go at it again.

And on that note it is time for me to watch some Parks and Recreation. I’ll see you around sports fans. TILL WE MEET AGAIN!