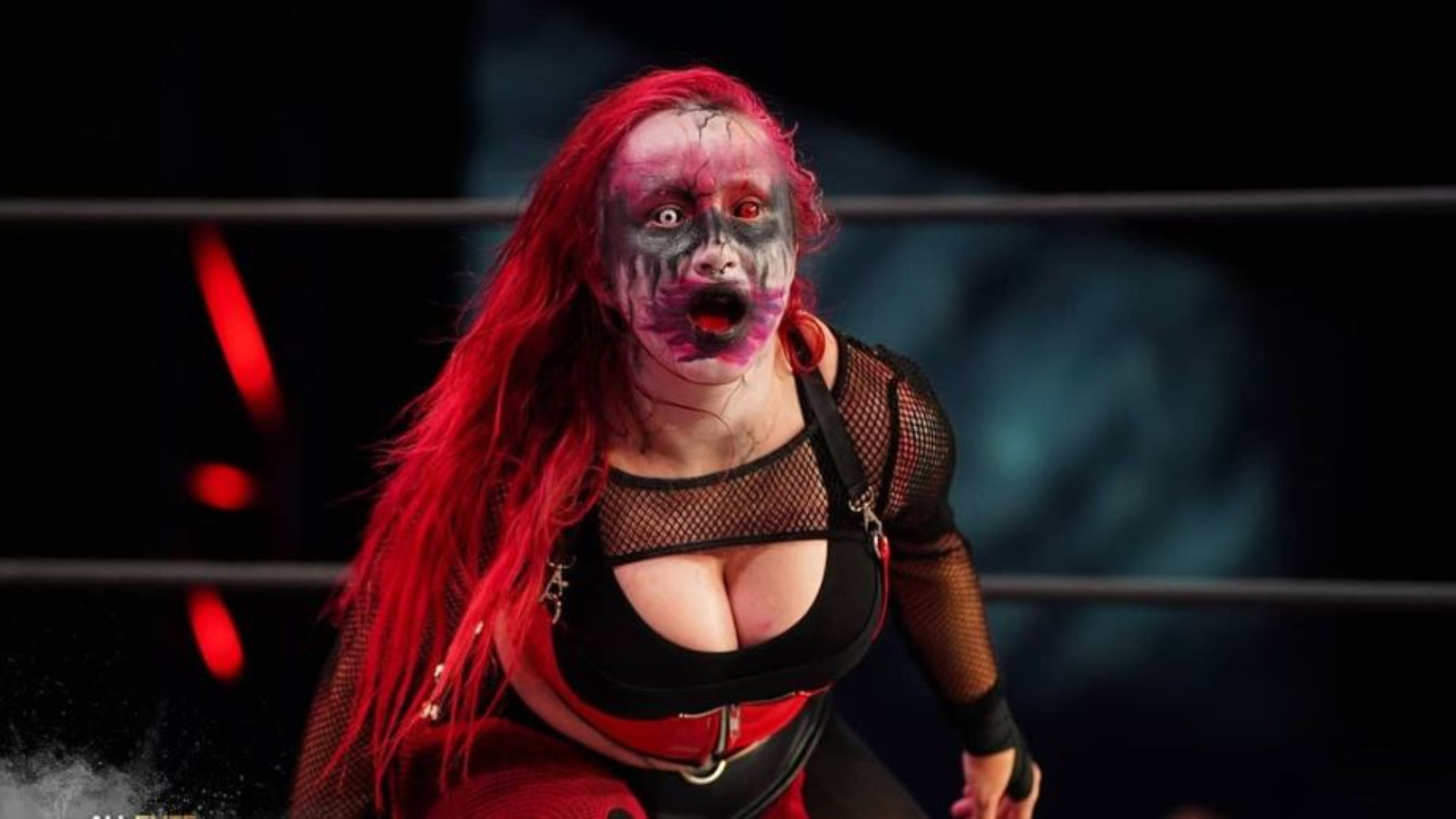 Abadon is a huge superstar plus she has a really creepy gimmick. (PHOTO: AEW)
Opinion All Elite Wrestling Lizzy Flanagan

Abadon joined the AEW roster in 2020 after a squash match over Anna Jay. Since then, she’s been one of the company’s most unique characters; her appearance alone sets her apart from the rest of the roster, and her demonic move set (mostly the biting) cements her place as AEW’s spookiest star.

However, Abadon’s role in AEW has been rather limited up to this point. I believe the character could greatly benefit from being fleshed out

In the first storyline, Abadon had a best friend (or sibling) who loved pro wrestling. Abadon would watch with them and never understood their fixation with winning championships. Then the friend and Abadon get into an accident, maybe a car/train crash (or something more supernatural, if AEW wanted to emphasize the spookiness). Abadon lives on, undead, determined to win a belt in her friend’s memory. AEW just happens to have a shiny piece of gold waiting to be captured.

This backstory would be sad, but compelling. It could make Abadon a very sympathetic character (imagine if, for example, her friend calls her Abbie instead of Abadon).

In scenario number two, Abadon was brought to life by a scientist who loves fighting but doesn’t want to do it themselves. Abadon is their monster gladiator who does all the dirty work for them.

A major advantage of this storyline is that it could give Abadon a manager. This would allow her to talk, in a sense. If she has someone to speak for her, she could be given promos either in the ring or through video packages.

This backstory is a combination of the previous two. In this timeline, Abadon was brought to life by her best friend/sibling, who’s trying to live out their childhood dream of being pro wrestlers despite the fact that Abadon died.

Depending on the direction AEW wanted to go in, the friend in this scenario could be a benevolent, mourning character who wants to ignore the inevitability of death and chase their dreams with Abadon, or they could be a greedier, manipulative figure.

All the previous ideas rely on bringing in another character to Abadon’s backstory. This storyline focuses on Abadon’s character alone, with no outside influences. The crux of this backstory is that Abadon wanted to be a pro wrestling champion as a child, and absolutely nothing— not even death— will get in her way.

This scenario has vignettes of a lonely girl in school. There are clips of her sitting alone at lunchtime, watching pro wrestling matches while she eats (Bonus points if she’s eating Oreos in these vignettes since those are her cookies of choice in the undead life). One cool potential vignette in this storyline is after Abadon’s death, she could sit up as she does in the ring, and then be shown hobbling toward Daily’s Place.

This wouldn’t add much depth to Abadon’s character, but it is likely the safest route to take. In this storyline, Abadon is bitten by a zombie and slowly turns into one herself. There could still be some exploration of her life before zombie-hood, but the origin story isn’t as dependent on her motivations or personality here.

One big advantage of this is that it opens the possibility of scary Halloween matches in October. I realize that WWE very recently had a zombie lumberjack match and became the butt of many jokes for it, but I believe a similar thing in AEW would garner much better results. This is mostly because it wouldn’t just be a shameless advertisement of an action movie; there would be a reason to have zombies at ringside, as they would be there to support their zombie sister.

No matter what direction AEW chooses to take for Abadon, I have no doubt she’ll remain a popular star in the company. Her character is just so unique it’s hard to not be entertained by it. Being the grown-up theater kid I am, I’d love for AEW to explore Abadon’s personality more deeply and develop her motivations and emotions more. Whether they do or not, though, I’ll keep supporting our favorite living dead girl.