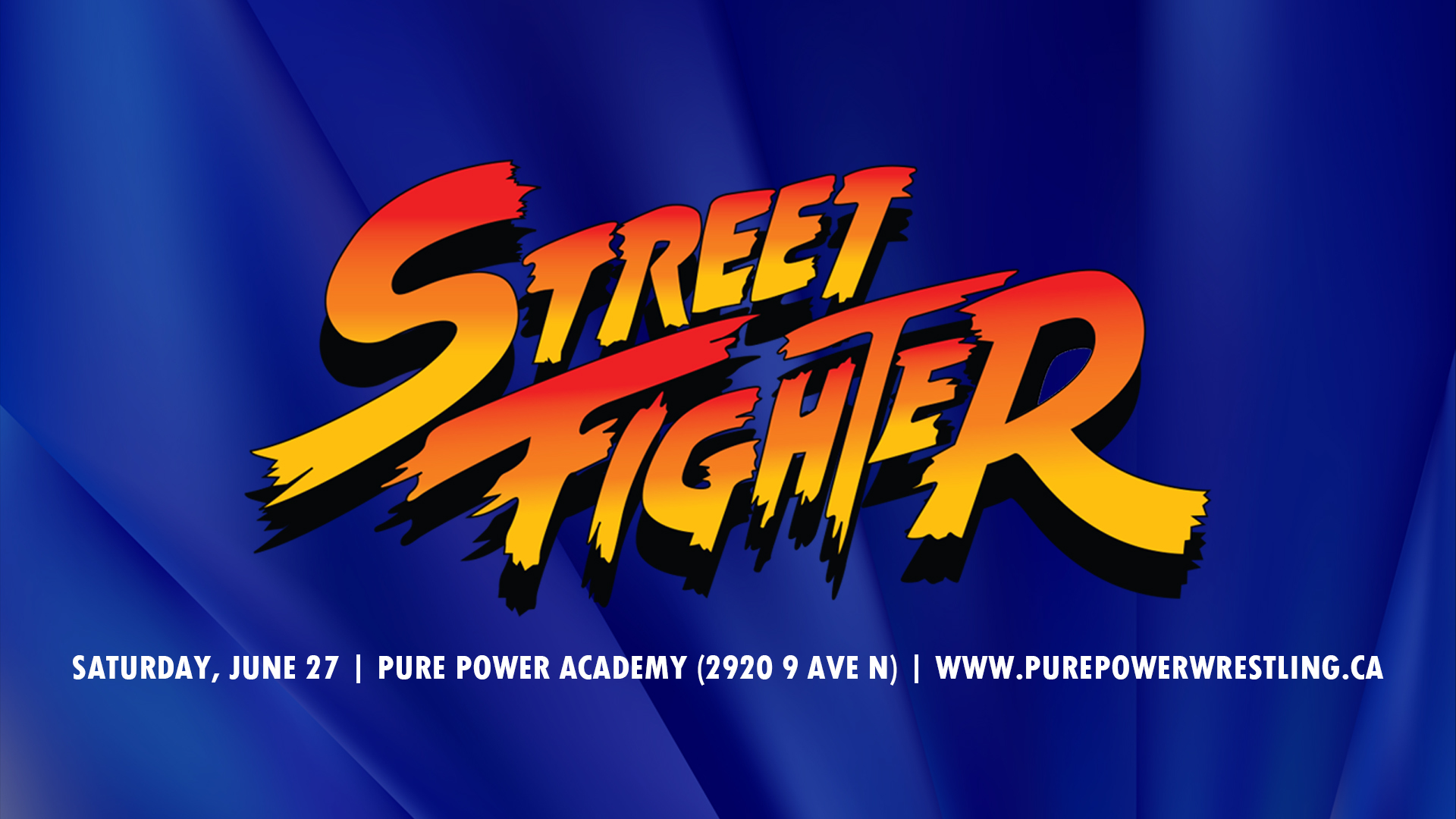 Today has been a good day sports fans. Not only did I get the chance to get a lot of things off my chest about how shitty the wrestling business seems these days, but just as important I got to get myself into a writing groove again. That has allowed me to get back to reviewing shows…albeit not a lucha show. No tonight I decided to review a show called Street Fighter from Lethbridge, Alberta, Canada based promotion Pure Power Wrestling. Why am I reviewing this show you may ask? For one, I know one of the people in charge (an old friend from my LOP Forum days), he informed of the show and I thought “that would be a good thing to review!” Two I’m also familiar with the promotion, having seen a few matches previously, including a really good one between Western Canadian wrestling legend Sydney Steele (who was on this show tonight) and the legendary COUGAR MEAT Kyle Sebastian. Seriously; how great of a wrestling gimmick is Cougar Meat?! Sadly Sebastian wasn’t on this show tonight, PPW’s first since the COVID outbreak, but they did have four other matches that all ranged from easy to watch to very good. It isn’t the same style as we’re accustomed to here at Lucha Central; there were a few in ring dives and one match that featured some lucha but overall PPW’s style is based around technical wrestling that starts slow, tries to build up heat and then climaxes big at the end. But hey; there’s a place for all styles in wrestling, I wanted to review a wrestling show and thus here we are. LET’S GET TO IT! 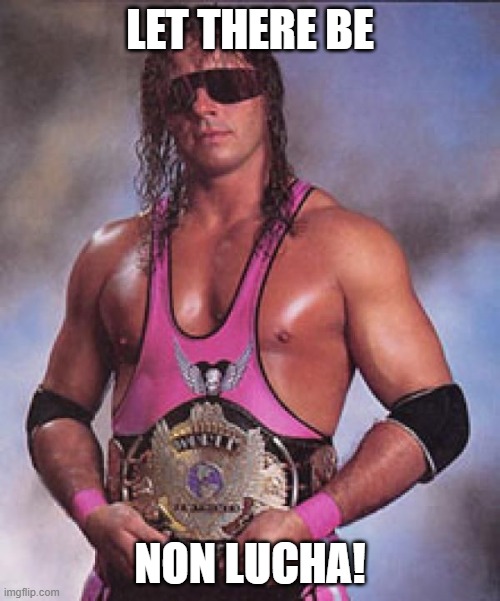 You know what you don’t see often in wrestling these days; an intergender match where the woman is the heel. In fact I’m pretty sure the last time I saw that was in Lucha Underground when Taya and Mariposa were villains, and even then it was kind of hard to root against them. Never the less that was the case here, though I guess that makes sense; you can’t boo anyone named Dewey. It’s like the most sympathetic name ever! Plus it was David Arquette’s character in Scream so there’s that too. Anyways, this match felt like it was going to be more comedy based early on but it slowly built into a more regular match and while simple, it began the trend on this show of matches that built and got better with time. Both Robson and Angelica have the basics down and Angelica in particular came off as very charismatic; it’s easy to see why the promotion is high on her and why was featured twice on the show. It’s also a little surprising in that regard that she wound up losing, but then again that wasn’t a big deal here. A simple, solid opener.

This is definitely a show that could only take place in Alberta. I say that because the match began with Jumpin Josh walking out in a Matthew Tkachuk jersey…and getting cheered.

Now look sports fans; I’ve got nothing against the Calgary Flames. In fact, their old school uniform is not only the greatest uniform in the history of sports, it’s one of the ten greatest things ever, along with Ocarina of Time, Atlantis vs. Villano III, Kikuchi/Kobashi vs. The Can-Am Express, Pepsi, Buffalo Bites, Buffy the Vampire Slayer and Pink Floyd’s The Wall. The problem is that Josh not only did not come out in the old school uni (he came out in the modern Flames jersey, which is not NEARLY as good) he came out wearing the jersey of Tkachuk, a man so reviled that he makes Milan Lucic seem likable. MILAN GORRAM LUCIC! Were there seriously no other jersey’s available Josh? You couldn’t have gotten a Johnny Hockey one? Shawn Monohan?! SAM BENNETT?! I need a gif of Kassian wrecking Tkachuk now to cleanse this column.

With that out of the way let’s talk about the best match on this show. Oh yeah; I forgot to mention that didn’t I? The only negative I had about this match is that it featured a guy named Jumpin Josh and, well, he only jumped like two or three times. I get this is old school wrestling but you can’t be named Jumpin Josh and not jump a whole lot. Other than that this was another match on the show that built up nicely, wrapped up at just the right time and above all else featured some really smooth work. I’m not sure I’m ready to put Cowboy Bryn Watts ahead of Brandon Van Danielson as the best cowboy in Alberta but he’s got a rock solid foundation, really smarmy heel charisma and a mean powerslam, which he used twice in this. Frankly he would’ve stood out the most on this show to me if not for Josh. I don’t know if it was the fact that he showed a lot of athleticism in addition to just being really good at everything else (even at a small size) or the fact that he connected with the crowd better than anyone on the show but that tiny Tkachuk loving dude really left an impression on me. There’s something there and it’ll be interesting to see where he goes as his career moves on. But yeah; this was really good stuff. Great technical work, well built up story and they even found the time to feature some lucha libre stuff with the 619 and Josh’s La Mistica into a Crossface (somewhere Carístico got chills and then inexplicably screamed “BUENOS NOCHES ARENA MEXICO!”). Easily the best thing on the show, and this show was easy to watch.

Stormbringer and Travis Copeland wrestled to a Double Countout

I hope I’m not offending anyone with this but it needs to be said; if you ever want to see Jack Evans if he was taller and losing his hair, look up Travis Copeland. He looked eerily similar to Jack, only he was at least several inches taller and was rocking the Les Grossman hairstyle.

Now I’ll be honest sports fans; this match might’ve had a shot at being the best thing on the show if it had just featured another ending. Up until that point this was yet another match that started slow and just got better and better. There were a few more bells and whistles than the previous two matches, with Watts reappearing at ringside to help out Stormbringer (Stormbringer was out there for Watts’ match, but was kicked out early), but even with some interference the match never felt bogged down. That’s largely because Stormbringer is quite agile even for his size and age (he’s apparently 45) and Copeland is really good, yet another technically sound guy who seems to have more in the tank then he’s showing. They built things well, the drama was picking up and it felt this was going to a 20 minute draw…and then both guys got counted out instead. I must admit it was a little flat! The match was to help determine who the next number one contender was so I’m guessing they went with a draw to set up a triple threat; I just would’ve preferred doing a time limit draw if that’s the case. I guess we’ll just have to see. That was enough to bring the match down a bit for me, but overall it was still solid.

Finally; after years of referencing him on the LOP Forum’s and some of my columns, Western Canadian wrestling legend Sydney Steele is having a match of his reviewed! The bad news; it wasn’t the best match on the show, although that was admittedly because the previous two matches were both good to really good. Much like every other match on the card, this was all about starting slow and building up towards the conclusion, and once again it worked very well as the action got more gripping in the later stages. Cyanide was perfectly acceptable here but it’s pretty clear why he was the chaser and Steele was the champ. The Western Canadian legend actually works better for me as a babyface (especially when he’s in there with COUGAR MEAT) but there’s no doubt he has the cocky top heel routine down to a T, so much so that it was alarming how much he reminded me of Triple H). Throw in Angelica at ringside as his Stephanie and that’s a winning act. I do think there could’ve been more excitement in this match in comparison to what Watts, Josh, Stormbringer and Copeland brought to the table, but overall this was a very solid Heavyweight Title main event and the post match angle of Watts and Stormbringer coming out to beat up Cyanide while Steele watched, followed by the babyface run in, was a nice set up to whatever Pure Power will be doing next.

There you have it sports fans! I’m now off to watch Netflix and pass out. Till the Lucha Bag drops!