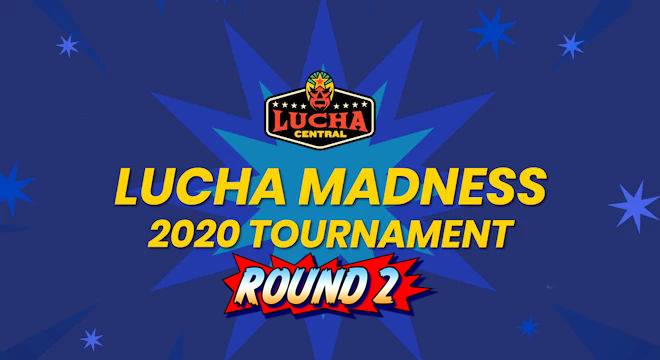 Who's moving on to the Sweet Sixteen?!
Lucha Madness 2020 Featured Featured on Home Eric Mutter

It’s Wednesday and as Mr. Brodie Lee would say, you know what that means; it’s time to reveal the results for the second round of Lucha Madness! Take a look below to see who is moving on to the Sweet Sixteen and who is going to be on the outside looking in, like that dude in the Spongebob meme. Winners are in bold.

The El Santo Region went as expected, with only Pagano truly threatening an upset before Psycho Clown pulled well ahead late. The Blue Demon Region was a different story, with Dragón Lee being the lone higher seed to claim victory. Último Guerrero and Blue Demon Jr. literally came down to one vote, with Demon pulling it out at the buzzer in our closest race yet. Meanwhile Hijo del Vikingo continued his Cinderella Run and, in the upset of the tournament in my view, Bandido knocked off Atlantis, proving that success towards the end of the decade was fresher in fans’ minds than Atlantis’ two major mask matches back in 2014 and 2015.

The Black Shadow Region was notable for Mistico upsetting El Mesias by a comfortable margin and LA Park receiving 100% of the vote, the first time in Lucha Madness history this has occurred. Between this and the first round, where he defeated Trauma II with 94% of the vote, Park has easily garnered the most support from fans thus far with seemingly no signs of slowing down, though the competition is poised to get tougher. Finally, the El Solitario Region was the most hotly contested, with all but the Wagner-Jack Evans match up being close until the final few hours. Even defending Lucha Madness Champion La Sombra was in trouble at times, with Blue Panther staying with him in a shockingly close race.

The Lucha Madness Sweet Sixteen polls will officially open at 12 p.m. PST, aka 3 p.m. EST! We hope to see you then!