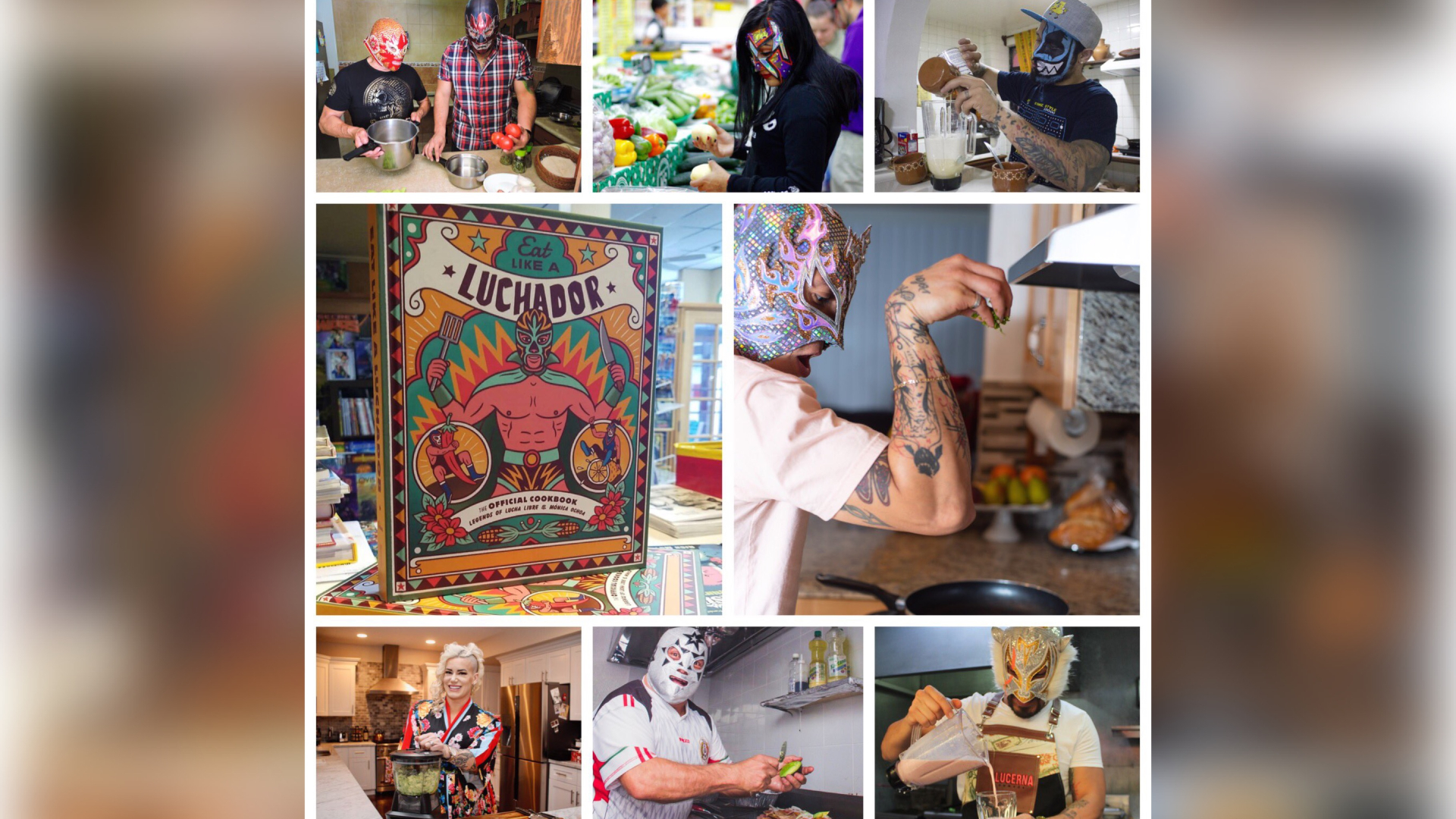 Lucha libre—or, professional Mexican wrestling—is the most popular sport in Mexico after soccer and has become an international pop culture phenomenon all over the world. This officially licensed cookbook with the Legends of Lucha Libre includes more than 50 favorite Mexican dishes with a modern-day twist from the sport’s most celebrated luchadores and luchadoras including El Solar, Super Astro, Penta Zero M, Rey Fenix, Tinieblas Jr., Lady Maravilla and Keyra.  Professional wrestlers influenced by and whose roots trace back to lucha, including WWE Hall of Famer Amy Dumas (Lita) and Taya Valkyrie (new NXT Superstar Franky Monet) lead a number of international stars contributing their favorite Mexican dishes as well.

Mexico’s leading female lucha libre journalist, Mónica “Centellita” Ochoa, has interviewed some of the most well-known wrestlers in lucha libre, costume designers, and restaurant owners from around the globe to compile this must-have collection of recipes fit for hungry luchadores and their families.

Also included are fun stories and facts on championship details and family legacies, dozens of photos of wrestlers in the ring and in the kitchen, and illustrations of delicious food.

Having grown up in a lucha family, one of my most favorite subjects to cover is that of the importance of family within the sport. While it is not uncommon for a child to follow in their parent’s footsteps in any career (many current WWE wrestlers in the United States are second- or third-generation wrestlers), in lucha libre, family and tradition are on a whole different level. Some families have ten or more members who have all become luchadores and luchadoras.

With this cookbook, I wanted to share the family traditions and favorite dishes of the stars of our incredible sport with recipe seekers and lucha libre fans and enthusiasts around the world. I wanted to collect the rich and varied stories of Mexico’s iconic sports entertainers—from multiple-branched lucha dynasty family trees and the luchadores who broke out of Mexico and became global stars in the 1990s to today’s hottest up-and-coming stars, to individuals who simply worked hard and per-severed to make it on their own, like my mother.

Masked Republic founder and CEO Ruben Zamora described the book as “1 part cookbook, 1 part lucha libre reference book (filled with bios, profiles and stories) and 1 part photo book. What it yields is a recipe for awesomeness!”

Kevin Kleinrock, Masked Republic President and COO added, “As we continue to expand our footprint in publishing, we could not have asked for better partners in producing our first full length book. The teams at Masked Republic and Running Press have truly put together a work of art well beyond any traditional cookbook. From the stories and histories to the images from more than half a dozen of the top photographers who cover the sport to the gorgeous illustrations by internationally acclaimed artist Bene Rohlmann, there simply is not another book on the planet like Eat Like A Luchador.”

Published by Running Press (a division of Hachette Book Group) details on where the book can be purchased around the globe can be found here.

At Masked Republic’s Expo Lucha Virtual: For The Love of Lucha live stream this past March, wrestling star and producer Salina de la Renta and her mom prepared their Puerto Rican Cornbread recipe from the book in a super fun Spanglish (with subtitles) segment which can be viewed here.