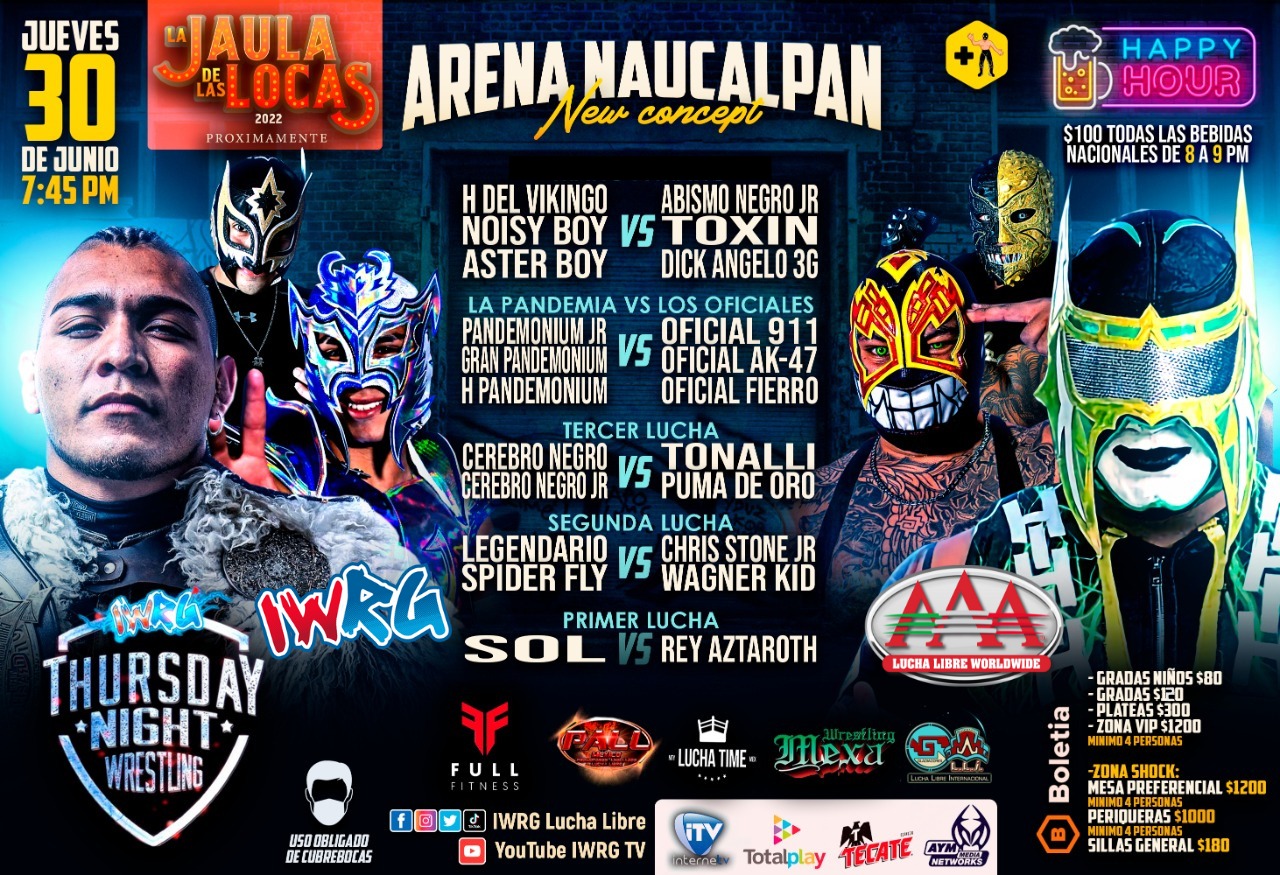 What’s this, WHAT’S THIS?! A lucha review on a Thursday night?! You’re damn right it is sports fans. This is what happens when IWRG decides to run a show from Naucalpan on Thursday that a) isn’t behind the Mas Lucha paywall, b) doesn’t feature certain creeps who we will not name, and c) has Hijo del Vikingo in the main event! Throw in the fact that there’s no new AAA content for a bit, CMLL is still on Ticketmaster, and how I generally enjoy my rare viewings of Arena Naucalpan events, and I figured I’d check this bad boy out and give it a review. Alas, while the show wasn’t a true stinker, I’m also not sure it’s worth much of your time either, with the main event going too short and the talent you’re probably not as familiar with not impressing. But that’s the game; sometimes you hit it out of the park, and sometimes you’re 30-46 and the only thing keeping you from the bottom of the barrel is the Cincinnati Reds. But enough about the 2022 Chicago Cubs season; let’s review.

Rey Aztaroth defeated Sol after pinning Sol with a Leg Trapped Michinoku Driver. A classic AAA opening match this was not sports fans. Hell, it wasn’t even a CMLL opener, and I’m not sure if that’s a good or bad thing. The wrestling wasn’t bad, but my Grodd it was blander than Wonder Bread in a beige room where Hayden Christensen was reading Shakespeare. Rey Aztaroth honestly did nothing for me here. He merely existed, not messing anything up and also offering nothing than some okay basing and offense you can see from any other luchador with a few months of training. Sol was better and showed some promise (he had a cool arm drag variation in there), but he wasn’t exactly breaking the bank here either, and his two dive sequences were largely uninspiring. I suppose it could’ve been worse, but I honestly would’ve taken a trainwreck over the lucha libre match equivalent of Nickelback. * ¾

Picture this, but done by a tiny guy in a mask, and the move barely making it instead

People threw money into the ring after this one and, I’ll be honest, I was left bamboozled by that one. It was certainly better than the opener, from an effort and overall skill standpoint, but this wasn’t a match I’d call good outside of a few spots and one Spider Fly tope con hilo into the barricade. It basically felt like four guys doing the basic lucha indie hits; I’m honestly surprised there was no Destroyer attempt. Legendario and Spider Fly definitely have something and they had moments of inspiration, but it also felt like they left stuff in the bag. Meanwhile, Wagner Kid looks like Bandido and wrestles like a very green Bandido, while Chris Stone Jr. was fine, which wouldn’t be a problem if I didn’t know he was the son of Chris Stone and the nephew of THE LEGEND SUPER CALO! Lord Calo had the same quality of Aero Star back in the day (in that he hit as much as he missed), but he was always going balls to the wall and he would’ve definitely gone into the crowd with a dive at least once here. Stone Jr.? Not so much, although I did chuckle at him attempting to kick out of the Shooting Star at the end. Oh, and in case you’re wondering, I took can’t believe I wrote this much about this match either. ** ½

Cerebro Negro & Cerebro Negro Jr. defeated Puma de Oro & Tonalli after Cerebro Sr. pinned Tonalli with a German Suplex after Cerebro Jr. nailed Tonalli with the cookie sheet shot to end all cookie sheet shots. This was an elimination match, much to my surprise; Cerebro Jr. was eliminated first by Puma after a mask pull/cradle spot, only for Puma to be eliminated minutes later when Cerebro Sr. pinned him with a pop-up hurricanrana. After the match, Cerebro Sr. challenged Tonalli (in a neck brace!) to a mask vs. hair match and my goodness a lot was going on here wasn’t there?!

The bad news with this match is that the early part of this match took a while to get going and I was drifting in and out. The good news is the match picked up and wound up being really good. I’m going to credit a lot of that to Cerebro Negro. He’s great, he’s always been great and this was a great reminder that he remains an absolute joy to watch. He worked great with both Puma and Tonalli, and had some inspired tandem offense with his son, who isn’t quite the worker of his dad but showed some promise. I do think the match suffered a bit from not being overly flashy, and those who have seen Puma de Oro in the past know he’s capable of being that, but by the end, I thought this overachieved, especially compared to the earlier bouts. A good tag match. *** ¼

911, AK47, and Fiero (Los Oficiales) defeated Gran Pandemonium, Hijo de Pandemonium, and Pandemonium Jr. after 911 submitted one of the Pandemonium’s (it is hard to distinguish which is which!) with a modified Octopus Stretch. After the match, the Oficiales appeared to challenge the Pandemonium’s to a rematch (with the masks and hair involved of course), which the technicos seemed open to. Will it happen? It’s lucha, what do you think?! I’m not going to give a rating on this one because, unfortunately, the stream cut out for a few minutes in the middle of the match and I’m not sure it’s fair to grade a match when I didn’t see all of it. What I did see what a typical Naucalpan brawl; some blood, a long rudo heat segment, a hot crowd, and some messiness mixed in with some good stuff. 911, AK47, and Fiero can do this match in their sleep at this point, and the Pandemoniums kept up well, although I’ll admit it felt like they were missing just a tad to really take this over the top. Maybe it’s just me. In any event, what I saw was fine, though I would’ve liked to have seen more. But hey; wouldn’t be a lucha show if the stream wasn’t raging as much war as the luchadores in the ring! NR

Aster Boy, Hijo del Vikingo, and Noisy Boy defeated Abismo Negro Jr., Dick Angelo 3G, and Toxin after Vikingo pinned Abismo with a 630 Splash. After the match, Los Vipers turned on Dick Angelo, I presume because of how dopey a name Dick Angelo 3G is, prompting Puma de Oro and Tonalli to run out and make the save. So I guess Puma and Tonalli are feuding with the Cerebros and the Vipers now? Who can keep track of this stuff? Regular IWRG viewers, that’s who. 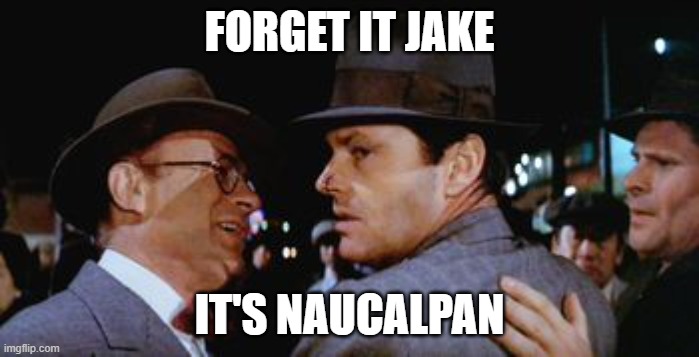 There was a lot of great talent in this main event, which is both a great thing and a burden as anything but a great match would’ve been disappointing. Sadly this was the latter, though I would argue that was more because it felt like this match came and went in ten minutes at most. The time they got I thought was well done. You didn’t get five hundred thousand innovative things from Vikingo like you would on a big AAA show, but the Mega Champion was still out there pulling off Inverted Dragonrana’s off the top rope (Grodd help the poor soul who tries to emulate that in Naucalpan in the next few weeks) and, quite frankly, can be great in his sleep. Even if this was a lesser-end performance, he still stood out. Aster Boy and Noisy Boy are not quite at the Vikingo level where they can still wow while in a lower gear (and good Grodd Aster, maybe hurry it up on those dive attempts!), but they had some nice moments, and Noisy Boy continues to look like a future star if he keeps getting the right opportunities. Frankly, I think the rudos may have been the highlight of the match. Angelo, a guy I’m relatively unfamiliar with, kept up just fine with the more notable talents, and both Abismo and Toxin were on point basing, with Toxin even throwing in some great offense in between. I would’ve preferred a longer match and some more jaw-dropping moments, and this was nowhere near the level of Vikingo’s best work this year, but it was a very good main event, and easily the best thing on the show overall. *** ¾

That’ll do it sports fans. I’ll see you when I see you, which is probably next weekend when AAA is finally done airing TripleMania ON SPACE! Till said time!