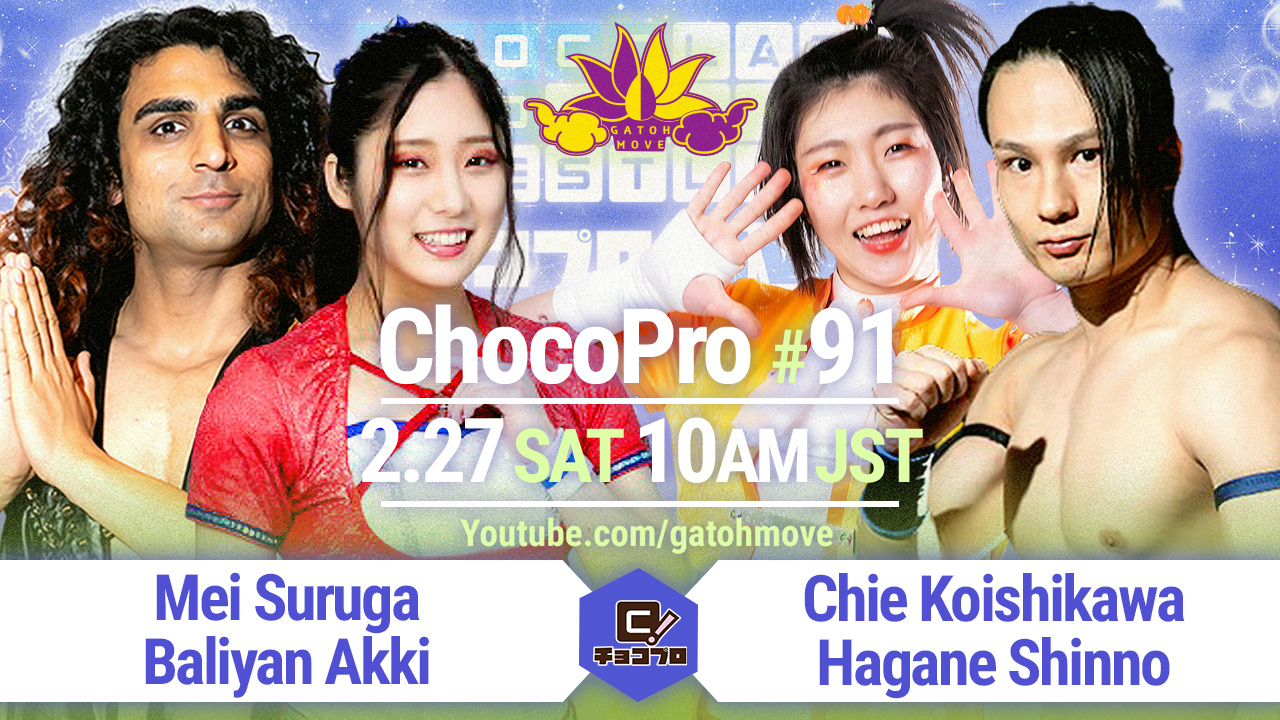 You may have noticed sports fans but this pandemic has led to there being a whole lot less lucha libre than usual. As such it means much less writing, which means I have to find new ways to pass the time. AEW has provided that for me with Dark and the Women’s Tournament, but just like Ariel in The Little Mermaid, I want more. Thank Grodd for GATOH Move’s ChocoPro! GATOH Move’s signature show, ChocoPro is basically an hour and a half long YouTube episode that features wrestling from what appears to be a makeshift living room somewhere in Tokyo, with a mat serving as “the ring” and windows that serve as turnbuckles. It’s very weird and it’s very awesome, at least I’ve thought so ever since I was introduced to the show sometime back. Now that I’m a regular viewer I thought what the hell; it’s not like I have CMLL to occupy my nights. So this weekend I give you the first ever ChocoPro review on Lucha Central, and it’s a good one! Let’s roll.

We get an opening where Baliyan Akki explains the rules of ChocoPro for new viewers (very cool!) followed by everyone singing and dancing. This is why ChocoPro is the best. Well that and it’s run by BASED QUEEN EMI! Oh goodness; I’m becoming one of those weird teenagers aren’t I? Next thing I know I’ll be saying YAAAS QUEEN. Dammit I just did. MOVING ON!

SAKI & Yuna Mizumori (Tropikawild) defeated Emi Sakura & Lulu Pencil after SAKI and Mizumori submitted Lulu Pencil with what looked like a Double Billy Goat’s Curse. Poor Lulu; she was bent more than that Matchbox 20’s song. No, I don’t know what I’m on about either. That’s the ChocoPro effect; it messes with your brain and shit.

This was delightfully absurd. Lulu Pencil, who is still basically a rookie (she started wrestling in 2019) is obviously a bit green but she makes up for it by being really charismatic and likeable. Basically Hulk Hogan if he was skinny and, you know, not Hulk Hogan. As such she’s quite watchable even if she’s not the smoothest worker, and she’s making ground there as seen by her roll up spots with Mizumori. The other three were all at the level you’d expect. SAKI, the only one I wasn’t familiar with, was pretty damn good, Yuna Mizumori is a good powerhouse with a lot of charisma and BASED QUEEN EMI is BASED QUEEN EMI. She’s the best and anyone who says bad things about her will be forced to listen to Sam’s Town on repeat until they admit The Killers peaked in 2004. I wouldn’t call this high end ChocoPro; this was more a comedy match with some good wrestling than good wrestling with some comedy. Even still it was highly enjoyable, it had Emi and it made me want to see more of SAKI. *** ¼

Emi and Lulu Pencil then go through the ChocoPro Bouquets (well wishes and messages taped to the window), some more shoutouts above the famous ChocoPro wall and then shout out their sponsors, which includes AEW. They also danced some more and then left. Honestly the best part of this was in the immediate aftermath of the last match where Sakura came over to Lulu with a water, seemingly to offer it to her, but instead then drank it all herself. That’s why she’s the GOAT! You keep that water Emi; she lost you the match after all.

Baliyan Akki & Mei Suruga (Best Bros) defeated Chie Koishikawa & Hagane Shinno to retain the Asia Dream Tag Team Championships. Second defense for the Best Bros! I’d say they were coming for the Young Bucks but the Bucks already know this. Why else would they keep avoiding them?!

This match RULED. I thought it was going to be something going in and it was even better. Hagane, who used to wrestle as Makado, is absolutely awesome; like jump off the screen awesome. So is Baliyan Akki, and the chemistry between the two of them was just magnificent. Perfect pacing and style contrast between them. The women were just as great. Those who watched her match with Yuka Sakazaki in the AEW Women’s Eliminator tournament already know Mei Suruga is really good and here she was great, breaking out some really gnarly submissions (the Muta Lock style bridge, the CATTLE MUTILATION), some really nice arm drags and one hell of a double stomp after running up the wall. It’s tough to show a ton of athleticism in this small space and the fact that Mei does it with ease should tell you how great she is. Chie Koishikawa isn’t quite on Mei’s level but she too comes with some great submissions and there were several times she locked Mei in holds that I bought as the finish. Really that was the biggest strength of this match; I was certain Best Bros were retaining at the start and several times they convinced me the result was going the other way. Excellent, excellent match. **** ½

And now comes the best part of the show in my opinion, a time where our competitors let their guards down take part in a different kind of competition, one with a tasty prize for the winner. That’s right; it’s JANKEN TIME! Or in other words, it’s “Rock, Paper, Scissors” tournament time.

SAKI defeated Lulu Pencil with Scissors on the second try. **

BASED QUEEN EMI defeated Baliyan Akki with Rock on the first try. * ½

SAKI defeated Mei Suruga with Scissors on the fourth try. Would’ve been five stars in the dome. *** ¾

There you have it sports fans! I’m off to rest up for tomorrow, when there shall be MORE CHOCOPRO! This time with Aja Kong too. TILL THEN!