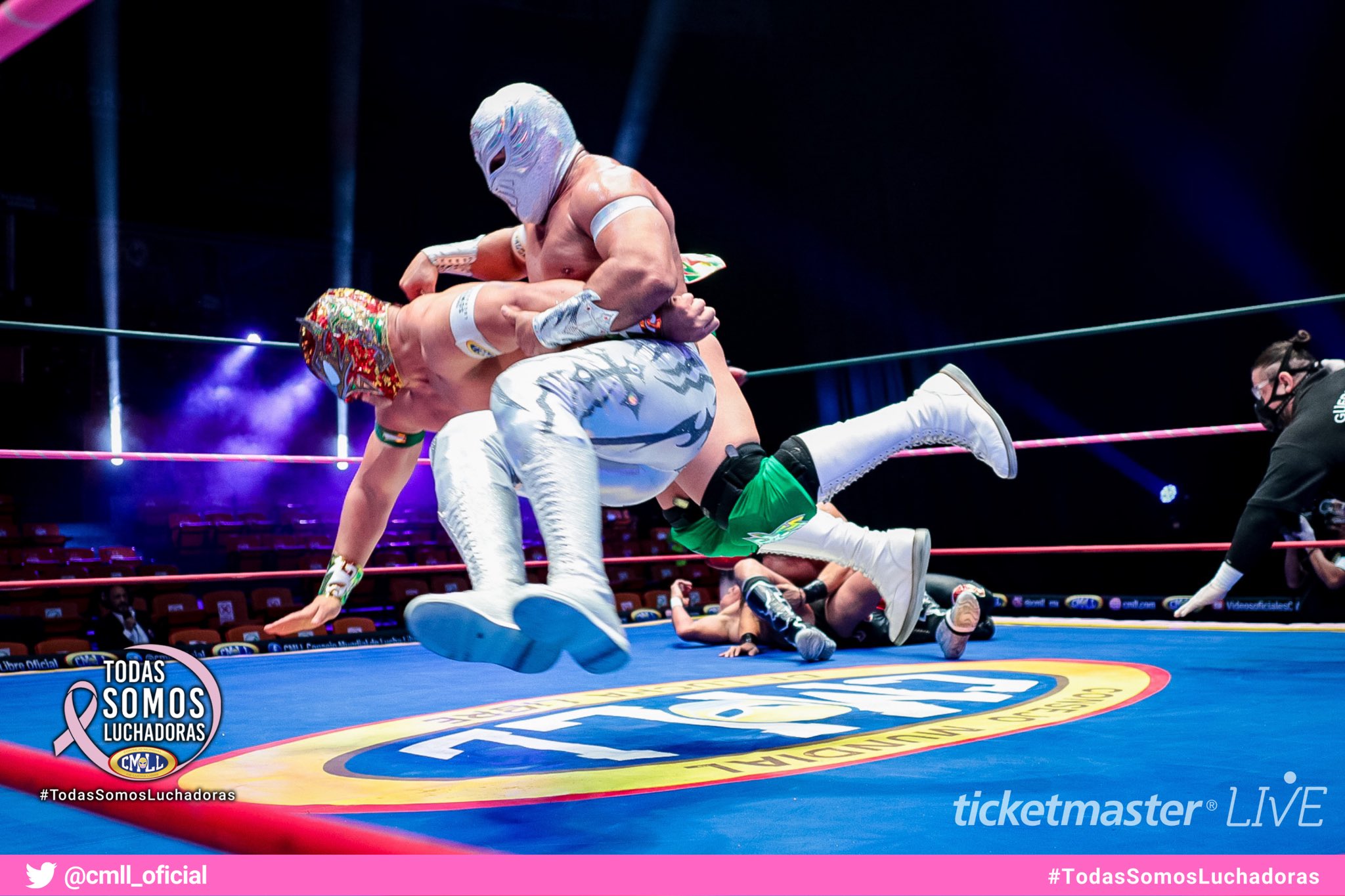 Tonight’s CMLL show was awful up until the main event. That’s it. That’s your opening paragraph. Let’s get through this atrocity so I can move on to something better with my evening.

To think there was one time that I would’ve been excited for a Disturbio-Robin singles match. Now it’s happened and I pretty much spent the entire time thinking about how Robin should’ve gotten himself on camera during the time his family destroyed UG’s sports car so he could’ve been fired. It couldn’t have been a worse fate than what he has now. He and Disturbio were absolutely lifeless in this match; they didn’t do anything wrong but they also did the bare minimum, going through the motions until it was finally time to wrap shit up. The fact that the announcers spent the match freaking out over things like leg locks just made it all the more infuriating. On the other hand, this is like how all CMLL openers are so maybe my expectations were too high? Either way this was, as Sonic the Hedgehog would say, no good.

I for one would like to congratulate this four; never in my life have I seen four people achieve this level of not giving a shit. Stephen Spielberg gave more of a shit making The Lost World: Jurassic Park than these four did.

This match sucked, in case you couldn’t tell. It was three falls that felt like fifteen. Ephesto and Mephisto wrestled like they’d have rather been anywhere else. I’d like to say that the Panthers at least tried and were just bad (and in Blue Panther Jr.’s case that’s possible given that he’s so muscled up now I’m not sure he could move in any situation) but quite frankly that seems like it be giving them too much credit. It was just four luchadores going through the motions and not even doing a good job; most of the moves looked like shit, their timing was shit, the pacing was so slow you could’ve listened to Iron Maiden’s “Rime of the Ancient Mariner” two straight times and still be stuck watching this match. How little did these guys care you ask? At one point Mephisto broke up his own partner’s pinfalll…for no reason at all. That’s right; that is a thing that happened and CAN I PLEASE STOP TALKING ABOUT THIS MATCH ALREADY?! An abomination that made me long for Wednesday night and a blown up Dr. Luther.

Well…it was better than the last match! Of course an enema while Dee Dee King’s rap album blares in the background would be better than the last match, but I digress. The highlights early on were pretty much limited to Mystique wearing a Sailor Moon costume, which was only good in the sense that it reminded me that my current wrestling crush, Shanna, dresses like Goku, which is way cooler than Sailor Moon. Search your feelings nerds, you know it to be true. Things did get solid once it got down to Sanely and Jarochita; I don’t know how good Jarochita is but there’s something there and Sanely has always been solid in unspectacular. It’s not much, but it at least made this usually forgettable battle royal bearable.

On the one hand, Estrellita not dressing as Tuxedo Mask when Mystique was dressed as Sailor Moon instantly killed the credibility of this match. I don’t give a shit if Sailor Moon makes Roland Emmerich’s Godzilla look like a Shakesperian sonnet; if your partner commits to shitty cosplay then you have to join them in shitty cosplay! I don’t make the rules here. Of course despite this Estrellita was easily the best person in this match so maybe I’ll give her a pass. It’s not like there was a ton here besides Estrellita; Dalys is just insufferable to watch at this point, Mystique just isn’t very good (though she did try) and Stephanie Vaquer, who is legit good, was stuck with Mystique all match and thus was quite limited. Even still this was the best I’ve seen from Estrellita in awhile so even without the cosplay I must give props. And thus ends the props. NEXT!

Holy shit; a La Vaquerita return. You know CMLL is in dire straits if they had to bring back Vaquerita, who last appeared when the Killers were still relevant. That’s pretty much the only note for this match. Sugehit and Sanely both tried, Vaquerita did okay, La Guerrera has seemingly lost all the promise she once had and this was very much just a match I’ll forget about in a few minutes. In fact I pretty much had to because the next match started immediately and boy did it make it easy to forget this one.

Someday someone is going to write a history of CMLL book in English and there will be a specific chapter dedicated to all the terrible finishes Dalys matches had over the 2019-20 period. I’m not sure what one will rank as the lowest of the low but it very well could be the one from this match, a tour de force of suck so vile that the last season of Game of Thrones breathed a sigh of relief, knowing it was no longer in contention for worst pop culture even of the last decade. 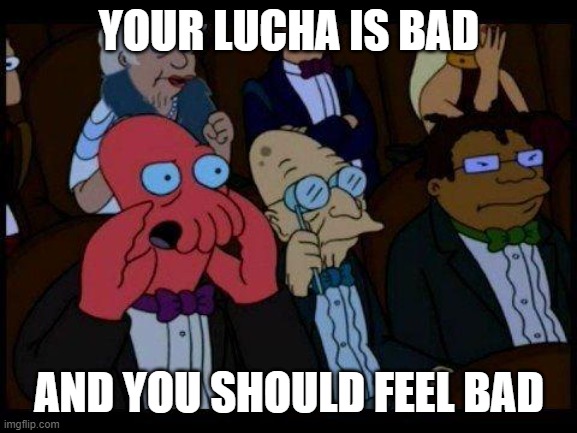 So let’s review; Dalys and Vaquer dominated this match (or Dalys did while Vaquer was also there), eliminated Sanely, beat up Sugehit…and then got DQ’d for beating up on Sugehit too much. That’s right; Dalys lost WITHOUT DOING A JOB YET AGAIN WHILE ALSO ALLOWING HER MORE TALENTED PARTNER TO DO NOTHING AND HER OPPONENTS TO DO NOTHING! To quote another shit person who Dalys could probably relate quite a bit to, that’s why this company is in the state it’s in, because of bullshit like this. This was dumb, it was borderline revolting and it made me happy the stream died during the next match because I was done with this show at that point. A complete and utter disgrace.

I missed all of this match because the stream died so I can’t really say anything about it, other than Jarochita’s team won and that was probably the right call. Hopefully it was better than the last match. Then again, ANYTHING would’ve been. Let’s just leave it at that.

I don’t even know what to say. I suppose in defense of the finish you can say the match wasn’t all that interesting to begin with, which is true. I love Euforia and he was trying his best, but nothing he did here could save this. I blame Forastero. I don’t know if he just didn’t care, if he had a bad night or a combination of both but aside from a brief moment where he hit a nice suicide dive and legitimately good Superplex from the apron into the ring he was lifeless. His strikes sucked, his selling went from nonexistent to John Travolta levels of overacting in a flash; not a thing he did in this match other than that Superplex and dive was memorable. And then it all culminated in Cuatrero and Sanson running out to cause the DQ, post match promos, another beat down, Gran Guerrero not coming out to save Euforia EVEN THOUGH HE WAS IN THE NEXT MATCH and once again I ask, WHY AM I WATCHING THIS SHOW?! This sucked.

I’ll be honest sports fans; if this match had gone a different direction I was going to be done with CMLL. Fortunately for them this main event was enjoyable enough that it somehow convinced me to not give up on the promotion just yet. This was by no means a must see type of match but it was enjoyable in a way the rest of the show wasn’t. The effort was good, the work was good, there was a coolness factor in getting to watch Bandido work with Negro Casas; it was just a fun wrestling match between four really good luchadores. And as a bonus we got to see that Bandido was in fact fine coming off his recover from COVID-19 and a Negro Casas appearance that reminded us that, even at 60, he’s such a joy to watch. As I always say, the saddest day in wrestling history will be when that man retires. A fun close to a show that was otherwise a travesty.

And on that note I’m off to watch GCW’s For the Culture. Till next time.