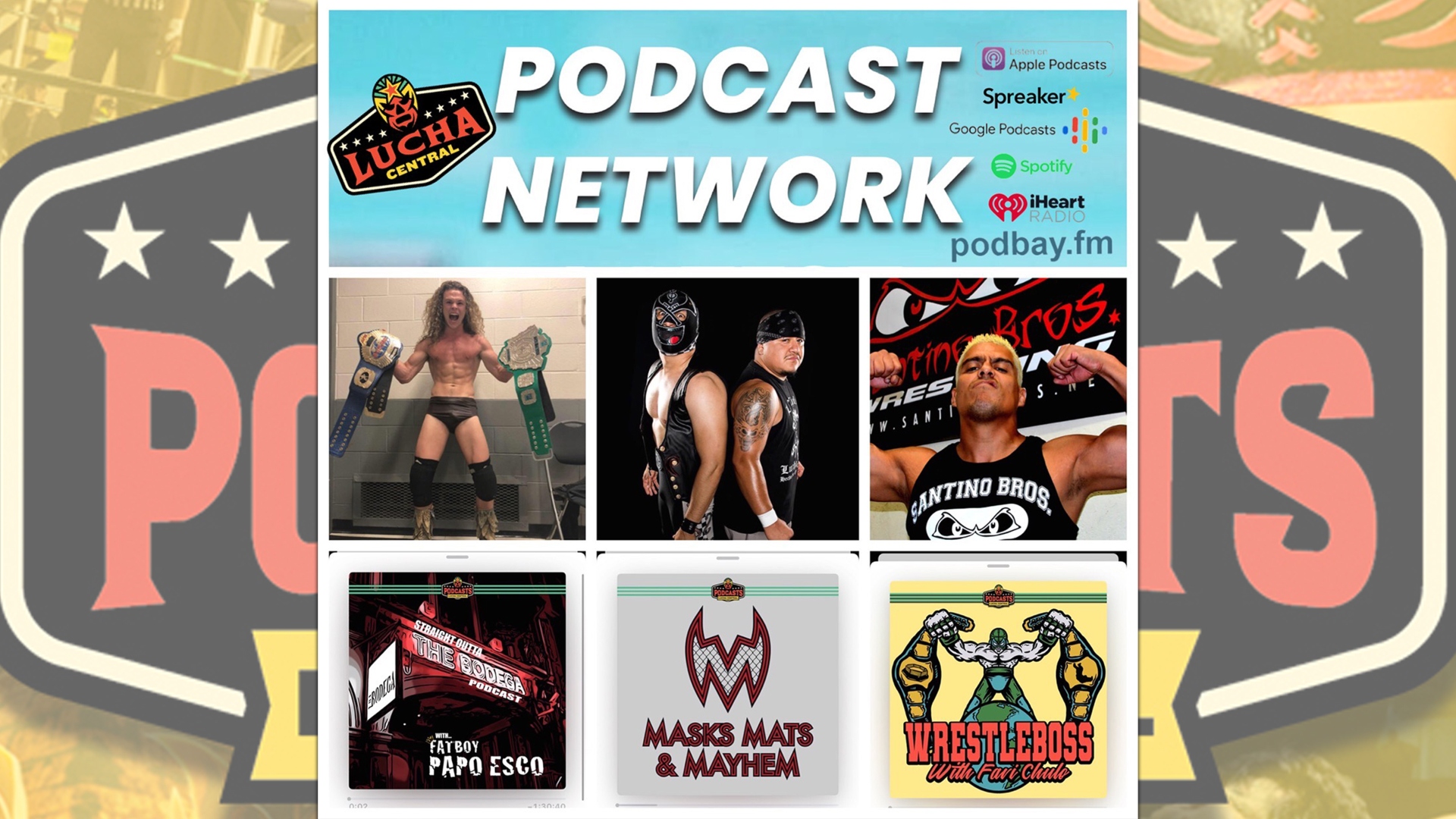 The Lucha Central Podcast Network wins 2-out-of-3 falls with Chris Jericho for the top spot in Mexico‘s iTunes Wrestling Charts, becomes #1 in Norway and continues to chart in the U.S. and Canada. Plus iHeart Radio adds all of the Network’s series to their app and LuchaCentral.Com launches portal.

Monday, The Mask Cast with Dos Hermanos Lucha returned for its monthly advice on building the ultimate lucha mask collection and stories from the brothers’ quest to complete theirs. Apple Podcasts, Podbay, Spotify

This coming Monday, the Business of the Business podcast will return as Masked Republic President Kevin Kleinrock welcomes Colt Cabana to the show to talk about the AEW wrestler and comedian’s groundbreaking philosophies about merchandising which lead him to launch the first modern era wrestling podcast, The Art of Wrestling, release many unique items directly to fans and teaming with Ryan Barkan to launch Pro Wrestling Tees, the single largest disruptor to the wrestling merchandising game in industry history. The series can be subscribed to now on Apple Podcasts, Podbay, Spotify

Hot off of three weeks of interviews with the two most influential executive producers behind the scenes at Lucha Underground, Eric Van Wagenen and Skip Chaisson, this past Tuesday‘s Masks, Mats & Mayhem show featured an in-depth interview with two talents who were part of the entire run of the series: Lil’ Chilo and Mariachi Loco. Hear never before told stories from behind the scenes including plans that changed along the way. And then, on Friday, the show dropped a bonus episode to celebrate Pride Month, as they took a look back at two very important interviews with former Lucha Underground and current AEW star Sonny Kiss who discusses being accepted by Lucha Underground and what it is like to work in the industry as an openly gay performer.  Watch the video versions on Lucha Central‘s YouTube or LuchaCentral.com/videos or listen on iTunes, Spotify, Podbay or your favorite podcast platform.

Tuesday also brought a brand new Network series WrestleBoss with Favi Chulo.  The former SoCal independent wrestling star and longtime host of the wrestling and MMA themed On The Mat Radio Show, brings his latest venture exclusively to Lucha Central. With a live call-in format, fans can get in on the action from 7 to 8:30 PM Pacific every Tuesday night at WrestleBossLive.Com. This week’s guests included XPW and Wrestling Society X star and now proprietor of the Santino Brothers Wrestling Academy, Joey Kaos, and Legacy Fighting Alliance founder Ed Soares. You can also find the series’ pilot episode available now which featured interviews with ROH, CMLL and Lucha Underground star Ricky Reyes, Bellator fighter Rick Hawn and Combate Americas SVP Mike Aframowitz. After airing live on Tuesday nights, each episode of the series is available on all major podcast platforms including iTunes, Spotify and Podbay.

Wednesday nights feature another live show, pero, this one is en Español.  La Mesa de los Márgaros comes to you directamente a Mexico City only on Facebook Live. The show that brings perspective on news and chisme (gossip) from all over the wrestling world welcomed to the table this week father and son Damian 666 and Bestia 666.  The former Lucha Libre AAA and WCW star, who spent a good part of 2019 feuding with his son in The Crash, is always a great interview. After the Facebook Live broadcast, listeners can download the show at their podcast platform of choice every Saturday.  iTunes, Spotify and Podbay.

On Thursday‘s Straight Outta the Bodega with Papo Esco – Papo and Pro Wrestling Revolution owner Gabriel Ramirez were joined by Pro Wrestling Revolution Training Academy graduate and current AEW star Jungle Boy Jack Perry to talk about his training, the NorCal pro wrestling scene and what brought him to his current spot on AEW Dynamite every Wednesday night on TNT.  Also, ICYMI, last week on the show, WWE referee Tom Castor returned home to NorCal to talk with Papo and Gabe about breaking in with APW and Pro Wrestling Iron, working the scene, his WWE tryout, his gruesome mid-match leg injury and the road back to the ring. New episodes of the show drop every Thursday on iTunes, Spotify, Podbay and more.

Fridays on the LCPN are for our weekly recap shows Lucha Central Weekly and Lucha Central Weekly en Español.  Two shows, two languages – ALL of the top lucha libre related news of the week not only from Mexico, but from the luchadores in AEW, Impact Wrestling, MLW, Ring of Honor and WWE as well.  You give the shows 90 minutes and they’ll give you everything you need to know to be up on what’s happened in the last 7 days, and what not to miss in the week to come!  This week, both shows talk about the start of the Fantasma era of NXT as newly anointed Santos Escobar and the empty arena shows in Mexico including IWRG having their license revoked while DTU‘s show on a ranch went off without a hitch.

Also, if you missed it, last week on Lucha Central Weekly, WWE Superstar Lince Dorado called in to talk about his training to become a luchador, his first time wrestling in Mexico, making his own gear – including his Twitch live, his relationship with artist Jesse Hernandez, better known as Urban Aztec and the new WWE x Urban Aztec x Lucha House Party t-shirt available exclusively at Footaction.Com. Listen to the interview here: iTunes, Google Podcasts, Spotify With so many great weekly and monthly series – and more to come, it is a great time to subscribe to the Lucha Central Podcast Network full feed on iTunes, Google Podcasts, Spotify or simply search “Lucha Central Podcast Network” on your favorite podcast platform.