The one downside about making mad money from dog sitting is that, on occasion, I wind up at a place that doesn’t have the El Rey Network. Tonight was one of those nights, which meant I was scurrying off Twitter at 8 p.m. with the faintest of hope that the latest episode could appear online somewhere before I went to sleep. Luckily technology these days has come farther than the Chicago Cubs, and by 10 p.m. I had figured out that I could watch LU on demand on my phone because I had DVR’d it. And that’s the story of how I watched tonight’s LU episode, a very good episode with a surprising Match of the Night, on my cell phone so I could review it for you dear readers. Don’t ever say I don’t go the extra mile for you. And with that, on with the show!

Match for an Aztec Medallion

Dammit LU; am I supposed to now expect debuting luchadores to win their first matches now? First it was XOLishus and now Dezmond X has joined the trend, defeating Paul London one week after big things looked to be happening for the Rabbit Tribe. I guess not yet! The good news for people wanting a more serious London is that they got it in this match. Mala Suerte and Saltador interfered and did weird shit from time to time but mostly this was played straight and really fast, with X going at a million miles per hour and London keeping up, though not displaying as much flash. That’s quite alright by me as Dezmond X needed to make a good impression and he did just that; I’ve liked what I’ve seen from him outside of LU but there seemed to be a little more focus and a little more “oomph” behind him tonight. He looks to be a keeper and he will be at least for the next show given his victory of the Medallion here. By the by, that now makes that seven way Gift of the Gods bout between Son of Havoc, Big Willie, Dezmond X, El Dragon Azteca Jr., Ivelisse, King Cuerno and Mil Muertes. The only reason I’m not more hyped is because I know Paul London is in huge trouble for this defeat. Hopefully Kross goes easy on him!

Papa El Jefe, the Most Diabolical Hater This Side of Boyle Heights

I’ll be honest; there was like fifteen points in this shindig where I had no idea where this was going. Antonio came out, had all seven Medallion winners place their Medallions in the Gift of the Gods Championship…and that was that for part one. Anyone who claims they didn’t expect someone to come out and steal a medallion from one of these seven is lying; that or they’re the same people who though Trump really meant to use wouldn’t instead of would. Alas it didn’t happen and I was wondering what the point of it all was…and then Papa El Jefe went stone cold! 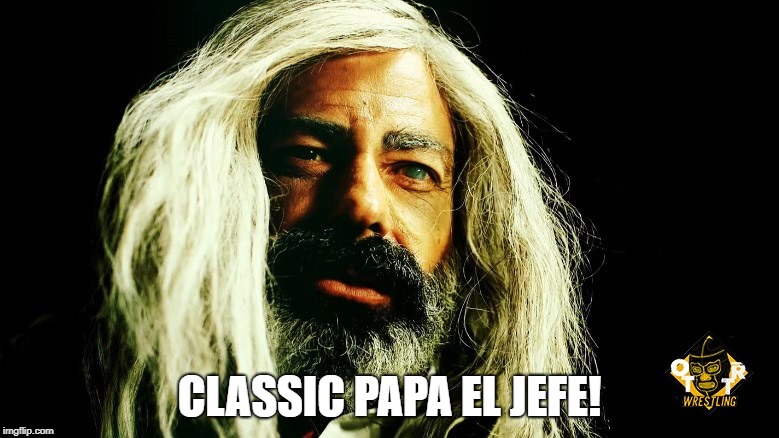 Apparently Antonio isn’t a fan of seven way matches; neither am I because you can’t book them in TEW, which makes it hard to do actual Gift of the Gods matches! So in a cruel twist of fate, Papa El Jefe decided we were going to do a quick, impromptu battle royal, where the winner would get to choose who was kicked out of the match! So what happened?

We won’t spend much time on this because the thing was so damn quick it was over before I could put my Sunkist down. The most important things to know are a) Mack and Havoc were the final two, with Havoc eliminating himself to give Big Willie the choice and b) Big Willie chose Mil to be eliminated from the match. In terms of logic, this was an INCREDIBLY smart call. Havoc, Ivelisse, Azteca, X and good ole Deer Antlers all have their skills but come on; Mil Muertes is Mil Muertes. He and Matanza are like the only dudes who give Kevin Kross slight chills of fear (but only slight). He would’ve easily been the most dangerous person in the match so Mack getting rid of him was brilliant. It also works to help further the Catrina-Mil issues (Catrina looked like she wanted to impale Mil after the announcement), gave us Mil wrecking everyone and will probably lead to Big Willie vs. Mil later in the season, which I am all for. Overall I enjoyed this, even if it went in a direction I didn’t expect in the slightest.

Ladies, gentlemen, people who really like dinosaurs…whatever expectations you had for this match had to have been shattered by what actually happened. I mean holy shit; DID WHAT I JUST WATCHED ACTUALLY HAPPEN?!

Batman’s lucky there isn’t a dinosaur equivalent of this gif!

Let me get the nitpick out of the way; I get why LU had interference during and after this match as the Worldwide Underground vs. The Snake Tribe has become a pretty hot feud. And in season three this match, without question, would’ve needed the run ins. Not this time. It didn’t detract from the match but it did prevent more Vibora-Mundo sequences, which is a shame because one on one they were incredible. Both of these men deserve a standing ovation, Mundo for (outside of the LU universe) seeing something in the Luchasaurus and guiding him into becoming someone who could have this performance and Vibora himself for working towards. He was sensational. Some of the stuff he did, like the Golden Triangle moonsault, shouldn’t be possible for a guy as tall as him. And it wasn’t just the athleticism; Vibora looked like a complete guy in this match between the high flying, the power moves and most importantly the selling, which got the crowd behind him like I never would’ve thought possible. It remains to be seen whether he can do it without Mundo and I’m sure part of the reason for all the interference was to hide some of the weaknesses Luchasaurus may have. But considering this was a guy who only one season ago couldn’t have a three minute match with Paul London, what I saw tonight was out of this world. Full marks to him, full marks to Mundo for getting every last drop out of him and full marks to this match. You could legit argue it’s the best match of season four to this date and not because it’s a weak field (it isn’t), but because it was a legitimately amazing match.

Trust me sports fans; the only thing more over the top than the title for this scene was this scene. We saw XOLishus doing a workout right out of a 1980’s infomercial (complete with Flashdance references) that was secretly being watched by Jack Evans, still seething over his defeat a few weeks ago. And then it got even stranger! Ricky Mundo and his doll appeared to ask what Jack was doing. “Learning my enemy’s weakness!” I love Jack. Ricky told Jack the Worldwide Underground could’ve used him, to which Jack reminded Ricky he hates snakes, Mundo is cool with him not participating, so on and so forth. So Jack then left and that’s when we learned that Ricky and his doll have been doing no good horrible things, like killing Jack’s former best friend Angelico off screen. Alright it was just Ricky but its pretty clear the doll told him to do. The doll now wants him to do the same to Jack and BY GRODD JACK RUN! I know you’ve slayed dragons, destroyed star destroyers, conquered FIFA and invented modern lucha libre but unless you’ve been in a few Chucky movies I missed…I don’t like your odds here. Then again, if Jack has to die for us to get the ultimate LU match, I guess it’s a sacrifice I’m willing to accept. The ultimate LU match by the way; the doll vs. Kevin Kross. You’re lying if you say you don’t want to see it!

This was the point of the show where you thought that LU maybe should’ve cut that Medallion segment down a bit. Or perhaps should’ve put this match on a different show than Vibora-Mundo, which was so surprising in how great it was that I think it made everything else tough to follow. And this match did indeed have a little trouble following because of that and because it was barely as long as last week’s Cage-Mil match. It was less of the huge match we all expected and more of an appetizer for what should eventually be a huge match; basically the buffalo bites to the chicken finger platter. And now I’m hungry. DAMMIT I JUST MADE IT WORSE!

Here’s the thing; even with all of that this match was still, on the whole, really good! They followed the same template of the Mil-Cage match from last week and had these two beat the crap out of each other on the outside before moving things back in. It was intense, it had some creativity (I liked Cage pulling a page out of the Octagón-Fuerza Guerrera playbook to tie Pentagon’s mask to the guardrails on the floor) and it was a nice table setter for some really strong in ring action as Pentagon and Cage traded big moves. There was absolutely nothing wrong with what they did in the slightest…besides the fact that they a) didn’t get more time and b) were following a far more exciting and unexpectedly great match. Make this match longer, take Mundo-Luchasaurus away and it looks better by comparison. Fortunately that will be happening because despite Pentagon winning clean, the feud wasn’t settled as Cage was able to fight out of Pentagon’s arm breaker and hit him with an F-5. There will be a rematch and I anticipate it’ll get everything we all expected from this match. That’s a good thing.

That’s game sports fans. I’ll be back tomorrow for a preview of CMLL Super Viernes, which features the ace himself Pentagon Dark. Though he’ll actually be called Penta Zero M this time. Don’t ask. TILL THEN!

BREAKING NEWS! The Briscoe Brothers to team with Rush against Fenix, LA Park and Pentagon on Negro Casas’ Aniversario