Allow me to start this column off by saying thank Grodd I waited till watching tonight’s Lucha Underground a second time before doing this review. If I had done it after the first watch this would’ve just been the delirious ramblings of someone still processing what they saw. Now it’s the delirious ramblings of someone who has processed what they’ve seen; a good trade off! Either way you’d be reading about a show that could only happen in the Lucha Underground Temple. There were payoffs, deaths, Joey Ryan finding love (in a hopeless place), resurrections, surprise returns, wishes granted, prisoners freed, proposals; hell I may be missing a thing or two. It was a wild ride and as per usual, I was happy to take it all in. But enough hype; let’s get into more detail.

Get You That Moth Money

This roller coaster of a show naturally began with sexual innuendo and cash money. Only in Lucha Underground! Antonio Cueto had just finished a phone call with who I can only assume was Agent Winter (I’m guessing that because he asked whoever it was to give their best to the Lord) when Mariposa walked in. It looked like she was going to try and seduce Papa Cueto to start us on a creepy note, but instead she asked for a Gift of the Gods Championship match. Antonio claimed she didn’t deserve it…and frankly he had a point considering I’ve won more than Mariposa has in either Temple. Luckily Mariposa came prepared with a whole lot of moth money to pay her way into the match, and the match was made, followed by Papa Cueto drinking beer in the creepiest way possible. I can’t even describe it and let’s just leave it at that!

Matanza wipes Mala Suerte off the face of the Earth

For a moment I thought the Rabbits had actually avoided any deaths tonight when I saw them in the ring; surely all three being out there meant they would be in trios action right?

In reality they were out there so Antonio Cueto could have Paul London choose which of them would be sacrificed to Matanza next. Yet another sign that you don’t want your picture showing up on the LU Twitter feed during the week! London chose Mala Suerte (it appeared the White Rabbit had ordered London to do so, though it wasn’t 100% clear), we got a quick match filled with silly (and funny) sound effects and Mala Suerte becomes the latest luchador to join Dario Cueto, Big Ryck, Vinnie Massaro, Fenix, all three members of the Crew, Jeremiah Crane, Councilman Delgado, Mr. Pectacular and probably a few more people I’m forgetting in LU’s great beyond. Hey; better than getting killed via a red bull amirite?! I’m still not minding these squashes although I am starting to wonder just where we’re going with this whole thing. Sooner or later Matanza is going to need someone tougher to sacrifice than the LU’s bottom feeders.

This was like a cross between the Jack Evans/XO Lishus singles match and the Joey Ryan/Ivelisse match, with the action topping out better than the latter and slightly lesser than the former. Jack Evans and Ivelisse both remained national treasures in this one, especially when they were in there together. Meanwhile Joey Ryan was better than he was against Ivelisse and XO Lishus continues to look superb. Like CMLL luchador Audaz I anticipate he’s got a lot more in the bag than he’s showed and another match with Evans seems like the exact thing to bring out the best in him. I think we’re at least getting that from this match; Jack got some revenge on XO Lishus by beating him, but XO never submitted to Jack’s triangle choke (as Steve Austin did at Wrestlemania 13, he passed out from the pain), which both worked to continue things and make XO Lishus look like a boss. Even more interesting was how Joey Ryan seemed into XO Lishus, enough so that there was some flirting mid match and that Ryan made a point of stopping Jack’s post match attack on XO. Ivelisse was still hostile to Joey after the match so I don’t know if we’re going this route but allow me to say; I would be all about the Ivelisse/Joey Ryan/XO Lishus trios team. Imagine the wrestling, the banter, THE FLIRTING BETWEEN JOEY AND XO LISHUS! I’m getting the same feeling I get when I drink a Sunkist just thinking about this!

Gift of the Gods Championship Match

I’m not sure this match even lasted five minutes…and yet every minute of it felt important and really well done. It was everything that Dude, Where’s My Car? wanted to be and failed at miserably!

And yet I’m not exactly sure how to rate this match. It wasn’t close to bad, at least in my book, but it felt like it was a little too short to be really good. The action was very strong; both Mariposa and Azteca pummeled each other to start, Azteca hit a great 450 Dive that Mariposa kicked out of, Mariposa then hit the Butterfly Effect only for Azteca to kick out, and then Azteca rolled her up for the win. That was pretty much the match. It was really well done, it was just also very short and lacking the presence of Marty “The Moth” who was mentioned by Vamp and Striker but was never seen. I guess I’m more surprised than anything? I don’t know. What I saw I enjoyed, it just felt like there should’ve been more.

Grab a cold one sports fans; we are going to be breaking this one down for awhile! Where to begin? How about at the part where I WAS RIGHT!

Turns out my theory of Jeremiah Crane being Jeremiah Snake proved correct, as the once dead luchador returned, still looking pretty dead and acting like a zombie version of his former self. I guess the implication is that Kobra Moon and co. stole Crane’s body after Three Way to the Grave in case of an emergency situation (hence why the coffin was in their lair last week) and Vibora’s death proved to be that emergency situation to turn Crane into Snake. So did Kobra have the Worldwide Underground in checkmate? NOPE! Instead Johnny Mundo revealed his own trump card, replacing Ricky Mundo with Drago’s former partner, the returning Aerostar! Not only did this instantly make the match better (I popped like mad when Aerostar came out with a Worldwide Underground bandana over his mask) but it actually made a whole lot of sense once the match played out. Although again, it would’ve been worth it just for the Aerostar bandana. That’s a top five LU moment of all time right there! 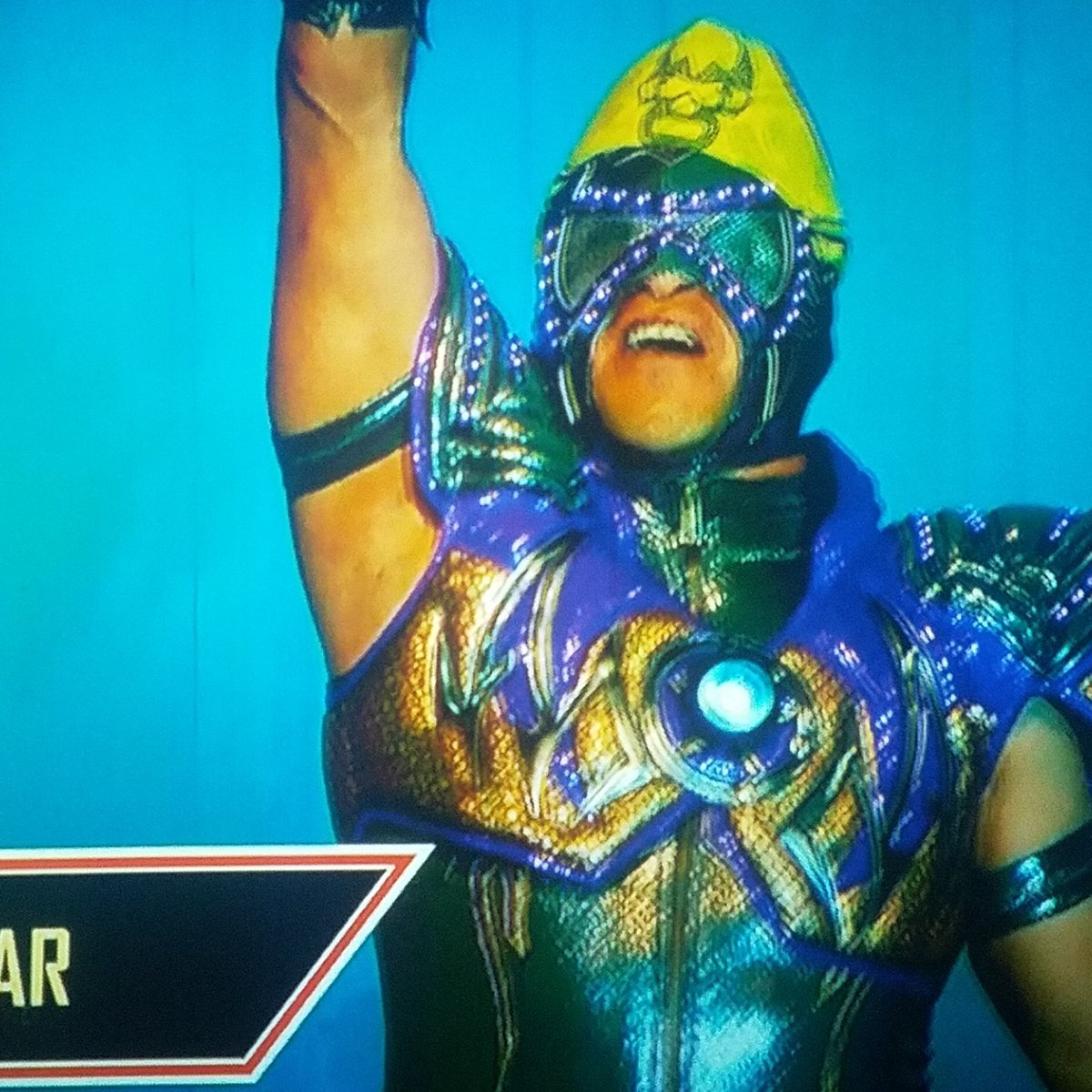 AAA should make this Aerostar’s next t-shirt immediately!

The match itself (which is going to get forgotten in all the other craziness going on) was awesome. I liked it a lot on the first watch and liked it even better the second time. The first time it felt like the match slowed a bit in the middle but upon a second viewing it was clear that it never relented; the action was nonstop, generally smooth and almost always exciting. The only flaw I could find was that poor Daga didn’t seem to have as much to do other than base and I hope at some point LU does find a way to show off his excellent skill set. But besides that everything worked. Jeremiah Snake has the same moves as Jeremiah Crane, but Sami Callihan otherwise adapted to the role very well, differentiating Snake from Crane enough to make it them feel like two separate characters. Kobra Moon was the only one besides Daga who didn’t have a ton to do, but what she did was largely awesome, including a great assisted bulldog of Mundo off the apron and to the floor. PJ Black had a tremendous sequence in the middle. Drago was his usual brand of consistence. Taya was tremendous, especially in a middle of the match sequence with Snake where she shrugged off her fear for a cool piece of fighting spirit. Naturally though the stars were Aerostar and Johnny Mundo; the latter was the driving force of the match (there was maybe two of the ten minutes where Mundo wasn’t involved) and the former was breathtaking with two huge dives. They were almost better than him wearing the Worldwide Underground bandana; almost. LU has felt like it’s been waiting for a “did you just see that?!” match for a few weeks now (ever since Mundo and the now deceased Vibora collided) and this was certainly that match, at least for me. And then the post match happened and went all…

First things first; Johnny Mundo did emerge victorious from this match after hitting the End of the World on Drago and thus earned one wish to be granted by Kobra Moon. What did he choose; to my utter amazement, he wished for Drago to be set free! That was completely out of left field for Mundo to do something so kind for another, especially a one off partner like Aerostar, but a) Johnny probably only got Aerostar on the team by promising he would free Drago when they won (thus explaining why Aerostar would even be in this match) and b) I’m pretty sure Johnny was so overjoyed to not be a Snake Slave that he had no problem helping out another. Whatever way you slice it it was a really nice payoff for the Aerostar/Drago story and probably should lead to more stuff between them and the Snakes. But we weren’t done! Taya was in tears (of rage) over this decision, probably because Johnny should’ve asked for infinite wishes and like a dumbass didn’t. But good Grodd Mundo even had a plan for that to; one in the form of a Macho Man inspired proposal to Taya. Aren’t they married in real life? WHO CARES?! They’re engaged in the LU universe now, the fans in the Temple absolutely loved it and I absolutely loved it as well. It was a bit corny, it was a little silly and it was absolutely something only LU, a promotion that may I remind you began this show with a mohawked rabbit being sent to a hell dimension, could’ve pulled off. They did and now I can’t wait to see what they do with the wedding, especially if the Honorable Jack Evans is officiating it! What more needs to be said? From the surprise reveals to the match to this proposal, this match worked on all levels for me. I will remember it for the fun and delirious feeling it left me with.

THERE’S MORE! Actually there wasn’t much more; just a dejected and batshit insane Ricky Mundo hanging out with his doll, wishing that Johnny and Taya would be together till death do them part. Uh oh! Maybe Johnny should’ve left Ricky on the team after all? Actually he made the right call considering Worldwide Underground would’ve lost without Aerostar, but still; now he’ll have Ricky and his doll causing trouble and trying to ruin his and Taya’s wedding! Thank Grodd its Ricky Mundo, otherwise I’d be worried that Johnny and the gang would be in big trouble!

And scene. That was fun sports fans! Let’s do it again next week. First though we’ll preview both CMLL and AAA tomorrow in preparation for the shows on Friday. TILL THEN!