Lucha Underground Review: Bring Me the Head of the Luchasaurus

Just like a great bottle of Sunkist, tonight’s LU has come and gone too soon. Fortunately like that Sunkist it was enjoyable going down. The first match went longer then I would’ve had it go, but after that we got a really good trios titles match, a main event that served a purpose and, for the first time in what seems like awhile, we got a whole lot of really fun backstage scenes. There were skulls, beheadings, Indiana Jones references and coffins, and not all in the same scene either! I’m not sure it all combined to make an essential episode of Lucha Underground but it sure as hell made it a lot of fun. But don’t just take my word for it…actually yeah, take my word for it! Why else would you be reading this review after all?!

Man oh man did this match (and post match segment) get a whole lot of time. I’m pretty sure LU could’ve done the Cage-Pentagon match from a few weeks ago twice in the span of time this whole shindig went. Overall I’d say it was a bit of a mixed bag. The wrestling itself was decent; there were a few sloppy moments here and there but for the most part Daga and Black were on the same page, and some of their reversal spots looked glorious. But overall it just felt like it went a little too long, especially since there wasn’t any sizzle to go along with the steak. At least the right guy won with Daga, and the post match beat down by the Snake Tribe and subsequent save by the Worldwide Underground was pretty decent, setting up a four on four next week between the Snakes and the Worldwide Underground. Apparently if the WWU wins they get one wish, but if the snakes win Johnny Mundo is Kobra Moon’s forever. And I mean FOREVER! Now wonder Johnny did what he did later…oh I nearly said too much!

Time for some LU comedy! Big Willie was backstage getting ready for his Trios Titles match when Catrina appeared from out of nowhere, leading to The Mack nonchalantly saying “damn girl. I need to put a bell on you.” Beautiful! Catrina reminded Big Willie (though he didn’t need one) that Mil was coming for him, Mack declared that he was ready to kick Mil’s ass even though Mil scared him shitless and Catrina (needing to get the last word in) retorted that death was all around Big Willie. How did she prove it? By showing Big Ryck’s skull to Mack, which just so happened to be right next to his locker.

The skull of Big Ryck

There are many things to love about this moment. For one, the last time we saw Big Ryck’s skull it was on Mil Muertes’ bad ass throne, so it makes perfect sense that Catrina would be in possession of it and able to transport the skull to the new Temple. Most importantly though was that Big Ryck’s skull came complete with his eye patch AND A CIGAR IN HIS MOUTH! Say what you want about LU but when people kick the bucket in the show they do it doing what they love. In Big Ryck’s case, he at least got to be beaten to death by the Disciples of Death while enjoying a cigar. Well done Ryck. Now please Big Willie, avoid the same fate so we can enjoy more of you being all “as a matter of fact” when Catrina threatens you. Also, maybe not get killed by Killshot first. How is it that loveable Big Willie is now enemy number one of the Temple?

El Dragon Azteca Jr. decided this was the point of the show where he needed to make a heartfelt speech. He did…and foolishly declared he was going to cash in the Gift of the Gods Title for a Lucha Underground Championship match at Ultima Lucha Cuatro, vowing to defend the title along the way. Dear Grodd the man is still stupid! I thought he would’ve learned something in between seasons three and four but apparently all he’s learned is that he can drag out his misery by doing something good, only to blow it the closer he gets to his goal. There is a 9,000% chance he’s dropping that title to Marty “The Moth” and somehow blaming Rey Mysterio for it after.

I love how LU somehow seems to course correct my complaints during the show. This seemed to get just as much time as the opener, only this was so much more enjoyable because there was so much going on. The pace for this match was excellent, with the action never seeming to stop as all six men got some great moments in. Luckily it wasn’t so fast that any story beats were missed. The White Rabbit still hasn’t appeared with the Rabbit Tribe publicly but Paul London and co. are definitely turning to a more serious side, which is welcome because they’re really friggin good (though it will be interesting to see how their crazy leader reacts to two straight defeats). And it’s pretty incredible at how Killshot, Havoc and Big Willie could wrestle their usual style while also managing to play up how they’re just not getting along. All in all the action was pretty good, the story beats were hit and this match was a certifiable hit. The only question I have is whether or not Big Willie’s issues with Mil Muertes will interact with his issues with Killshot or if one will precede the other.

First off, LET US CELEBRATE THE RETURN OF THE DEER ANTLERS! King Cuerno finally broke them out tonight and I haven’t been this happy since I opened the fridge last night to find one last Sunkist remaining.

Now onto the match. This was supposed to be a tag match (per orders of the unseen Antonio Cueto) with Cage and Pentagon picking their partners. Cage went with good ole Deer Antlers; Pentagon meanwhile decided to go with no one because a) he doesn’t trust anyone, b) Fenix is dead and couldn’t offer assistance and c) he’s gorram Pentagon Dark. He’s a strong, independent LU ace who don’t need no partner. Except he did, which makes his decision to go it alone tonight one giant…

Obviously this type of match is going to be more story based than a wrestling clinic, which is a-okay considering we got the highlight match just before this one. Even still I thought these guys did well with what they had to work with. They kept the pace quick, I liked the double teaming of Cage and Cuerno and I especially liked how Cage went out of his way to be both a bad ass and somewhat of a coward. Tripping Pentagon as he’s running the ropes? Letting Cuerno do all the dirty work before sending him away at the end of the match? That’s quite unbecoming of a machine there Cage! And that’s precisely why it worked because it got him heat and added some meat to this feud with Pentagon. Well that and the one man conchairto, which Cage hit Pentagon with twice. TWICE! I haven’t seen that move in years and there’s Cage breaking it out twice. Very nice. Cage now has a W over Pentagon, Pentagon has shown vulnerability (but not too much, and only because he was outnumbered) and this should make their eventual title match in two or three weeks even better. An okay match, but a successful segment overall. But not as successful as what happened next!

You remember the legendary moment from the Season Four trailer where Johnny Mundo was seen dropping a rope into cavern, dressed as Indiana Jones and with Taya by his side? We finally got to see it in full tonight! At some point in time Mundo apparently found Kobra Moon’s layer and was able to trick them into leaving it with an invitation to, wait for it, the Serpent’s Ball. Only Johnny Mundo could come up with something like that and only Kobra Moon could fall for it! In any event Johnny and Taya infiltrated the area, only to find Drago there tied up (suggesting he isn’t as onboard with the Reptiles as it seems) and Vibora…standing over a coffin. Battle ensued, Johnny looked to be trouble with the Luchasaurus and fortunately got bailed out by Taya and her awesome “Wera Loca” baseball bat. And with that Johnny and Taya got what they came for and left…I’m just kidding, Taya then took a sword, kissed Johnny and it was, how do we say…

That’s right; the Luchasaurus is DEAD! It seemed like only two weeks ago (it was) he was having an awesome match with Johnny Mundo and now he’s off to join Vinnie Massaro, Fenix, the Crew, Mr. Pectacular, Councilman Delgado, Pindar and Dario Cueto in the LU afterlife. WHAT THE HELL MAN?! We were all starting to really get into the dude and now, just like that, he is nothing more than a corpse on Kobra Moon’s floor, waiting for her and Daga to get back from the nonexistent Serpent’s Ball to find him lying there. And poor Drago! Not only did he have to witness all this but he’s probably going to get blamed for it too; they aren’t keeping him in chains there for nothing! As you can see there’s a lot going on here and that’s just the surface stuff; I have plenty of questions about that coffin in Kobra Moon’s den, which is either a really weird decorative piece or has someone in there that’s going to play into something at some point. Ultimately though anyone who says this wasn’t wonderful, glorious LU fun has probably checked out on the show. I loved Mundo’s one liners, I loved the goofiness, I loved Taya beheading Vibora with green goo squirting out and I especially loved Mundo telling Drago to “not let anyone know they were there” as he escaped (but not before going back to grab his hat!). Really the only sad part was the Luchasaurus’ death, and he’ll probably be back anyway; lizards do grow back body parts after all! The point is, this was awesome and I will be re-watching this many times during the week.

Game…blouses. I’m out of here sports fans, but I’ll be back tomorrow with a CMLL preview, a column on the great Negro Casas AND a review of tomorrow’s AAA show. That’s a lot of shit to do! Till next time, a picture of Pindar and Vibora when they still had heads. 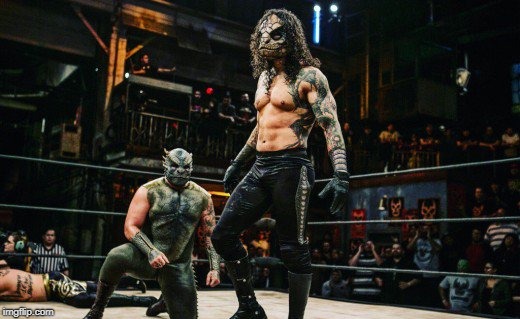 Lucha Underground Review: Never Invite a Monster to Your Wedding