CMLL Tuesday Preview: Roja-Sanson and the Disappearance of Raziel

Sports fans…this is gonna be a good one today. I must admit that I’ve been feeling a little burnt out the past few columns (that’ll happen when you preview and review shows almost every day) but this CMLL Tuesday preview feels fresh. I blame it on my good mood, a fridge full of Mountain Dew at my dog sitting assignment, the Home Run Derby being tonight and a Tuesday show card that actually looks pretty good once out of the opening two matches. So what are we waiting for? Let me share with you my silly preview!

What to Expect: One day CMLL will tell Fantasy, Pequeño Olímpico and Pequeño Violencia to go home, give Angelito something of value to do and make these Tuesday openers mean something.

Winners: The rudos win in three falls. NEXT!

What to Expect: I like to imagine that Marlon Brando uttering “the horror, the horror” as he died at the end of Apocalypse Now was because he saw a vision of this match. And that was after he went batshit nuts and got murdered by Martin “I’m still only in Saigon” Sheen. The only things to get invested in with this match are a) how badly the rudos will botch for Astral and Eléctrico, b) how bad Astral and/or Eléctrico will botch themselves and c) the location of Raziel. What has happened to Cancerbero’s better half?! I last recall him arguing with Tirantes and since then nothing. It’s almost enough to make one wonder if he went to a place that most grossly exploits its workers. 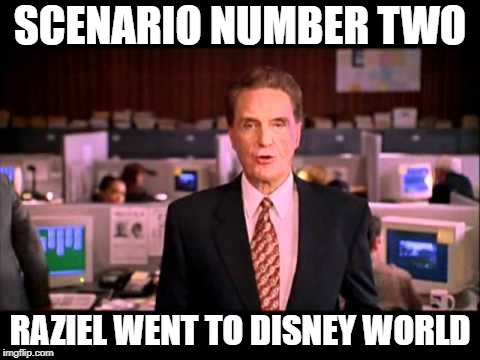 Winners: If the technicos win I will officially write to Sunkist to see if they will sponsor Lucha Central. Alas the rudos are winning. No free orange soda for us!

What to Expect: Now this is…wait, I have a gif to do this for me!

That’s better. Yes this will be a significant improvement over the first two matches. Pegasso will Pegasso, Fuego will dance and do a suicide dive, Tiger will be tremendous as always and Audaz and Universo Jr. will continue the most bizarre case of good chemistry this side of Teddy Hart and Joey Janela.

Winners: The technicos get on the board! They take it in three falls when Universo Jr. gets caught in Audaz’ majestic rolling armbar.

What to Expect: If you switched Tiger and Ephesto around then not only does the last match lose little (it’s Audaz, he’d make it work) but you’d turn this match into Cole Phelps’ run in the Homicide Division in L.A. Noire. Alas Ephesto stays and this match…well actually it can still be good if CMLL does what they did last week and keeps Ephesto to a minimum. That will allow the Panthers to work their usual magic, Luciferno to be solid and Templario to be awesome. Expect a well structured, fast and fun match. But not a Blue Panther crowd dive. He only does that once every fifty seven years.

What to Expect: Look, we all agree the Ángel de Oro-Cuatrero matches have been fun this year. But Roja vs. Sansón? Yeah, I got a feeling it’s going to be the American Graffiti to Oro and Cuatrero’s Nick and Norah’s Infinite Playlist. Just so we’re clear that’s not a shot Nick and Norah or the legendary band within a movie The Jerk Offs; all of it is great, but it’s no American Graffiti!

Back to the match! I’ve been looking forward to seeing this one ever since the Oro-Cuatrero mask match at Homenaje a Dos Leyendas where Roja and Sansón (especially Sansón) nearly stole the show as seconds for their brothers. Now they’re finally getting a chance to duke it out and I think the potential is really high. Sansón is just as talented in the ring as Cuatrero and even more charismatic and by Grodd if Niebla Roja isn’t one of the most underrated guys in CMLL right now. It’s amazing how both he and Oro went from good to great luchadores after losing their masks and it’s a shame that CMLL hasn’t given Roja anything to truly sink his teeth into since his Match of the Year candidate with Gran Guerrero back at FantasticaMania. Personally I think he and Sansón will knock it out of the park and it’ll go down as the best match between a Dinamita and a Chavez this week!

Winner: Kind of hard for me to believe there will be two title changes in less than a week so I’ll go with Roja retaining in three falls. Does it even matter; we should all be winners by the time this one is over.

What to Expect: The sun will rise, the sun will set, Atlantis will work a lot with the Dinamitas, Oro will do a moonsault, Rey Rey Buc will slum it, Soberano will be awesome and I’ll continue to publicly call out Fenix to get his ass resurrected (for a show that isn’t Impact or MLW) so he can come and try to prove he’s better than Soberano. Can I get Court Bauer, Don Callis, Catrina or Vampiro on the phone for the awakening please?!

Ball game sports fans. I’ll now return to my dog sitting gig as I wait patiently for the Home Run Derby tonight! Oh, and I guess CMLL Puebla. Till then!