We’ve tackled Expo Lucha’s awesome Future Legend show sports fans, which means it’s time to dive into tonight’s CMLL Super Viernes. It was very much the second best show of the evening. That’s not to say it was bad because it wasn’t. In fact I thought the first half of the card was stronger than usual, CMLL actually made a decent booking decision in the never ending Guerreros-Klan Kaoz feud and Cavernario-Matt Taven was, if not what we expected, close to it. This was a good show. It just wasn’t a great show and once more (you open the door?) CMLL reminded us why they are so hard to love with a main event that, much like the Aniversario, seemed to be trying to force us away from what we wanted to see towards something we still don’t. Such is the CMLL life. In any event you’ll see what I mean as we get to the main event. Let’s dive in.

Savior this moment sports fans, for we witnessed a pretty good opener on this show! It would’ve been even better if a) CMLL had actually allowed Arkalis and Robin to do some dives and b) had replaced Coyote with Yago or someone like Yago. I don’t know what it is but Coyote seems a little too rough around the edges for me still, which was highlighted by him nearly killing himself and Arkalis on the latter’s top rope hurricanrana attempt. Despite that (and the lack of dives) I thought these four made the most of the moment. Robin looked energized and dynamic in short bursts. Akuma was on point and he had the highlight of the match with a great dropkick to Arkalis on the barricade in fall three. And for his first time on Super Viernes I thought Arkalis came off incredibly well. He looked confident, worked a good pace, didn’t mess anything up and had some great stuff of his own in the beginning of fall three. He definitely should get more opportunities on this stage going forward and it was nice to see him take advantage of his shot. The rare strong opener for CMLL!

Let the record show that I don’t believe what I’m about to say next either. Are you ready? Okay…this match was good!

I know; like I said I don’t quite believe it myself. If I hadn’t seen it with my own eyes I’m not sure I would’ve believed it. It’s possible I’m overrating it because holy hell have the luchadoras matches been bad in CMLL recently but I honestly don’t think so. Aside from a few spots (notably one where Lluvia went for a Tornado DDT) and an abrupt ending (they could’ve been given a few more minutes) I thought this clicked really well. These six cut a far better pace than normal, the effort of everyone was top notch and some of the sequences, like one between Dalys and Jarochita to start the match were really strong. They were trying to get a good match out of this one sports fans and frankly I think they succeeded. It wasn’t a reinvention of the wheel by any means but for a division that has been lifeless ever since Zeuxis left it was probably the strongest match since…well when Zeuxis left! I enjoyed myself at least.

I didn’t hit me until this match but holy hell is it weird for Expo Lucha to be going on right now without Negro Casas being there. On the one hand, it sucks and it’s a damn shame CMLL is CMLL and didn’t allow it to happen. On the other hand, if Casas had been in Las Vegas tonight then we wouldn’t have gotten this match, where Casas once again turned back the clock as was a hero of Batman, Superman and Sean Astin in Rudy proportions.

I shit you not sports fans when I say Casas may have been more over on this show than his own Aniversario. Arena Mexico loved him that much in this match! It was that energy that helped get this match off to a hot start and allowed Casas and co. to take care of the rest. I honestly was ready to call this a great match until a few snafus occurred in the third fall. Even still it was really strong and a lot of fun. The Dinamitas were terrific as the rudos. Casas was awesome, as previously stated. Felino was on his A game, but still took a backseat in order to give more shine to Tiger. Tiger took advantage of it and had one of his strongest performances in recent memory. Somewhere Puma was surely smiling. Again, a few things in the third fall have me thinking this was more very good then great, but it’s picking hairs. This was another strong match on this show, and more proof that the day Negro Casas retires will be the saddest day in the history of time.

I’ll give CMLL this much; of all the ways I saw this match going, a two fall squash wasn’t one of them! And that’s what this match was aside from the brief moment the Guerreros got control of The Chris’ kendo stick to get themselves DQ’d in fall one. Beyond that it was Klan Kaoz decimating the Guerreros one by one till Ciber choke slammed the UG to end it all. Was it good? I would still say no. As per usual both teams tried their best and the match being laid out differently was a nice change of pace. Even still there remains only so much these two teams can do together, and while I looked the booking move of making Klan Kaoz look strong, I’m still more interested in Ant Man and the Wasp than I am seeing these teams collide at the Aniversario.

This match was like that scene from Heat where Al Pacino and Robert De Nero meet, with Taven as Pacino and Cavernario as De Nero. For those keeping score at home that means Cavernario was the better of the two. 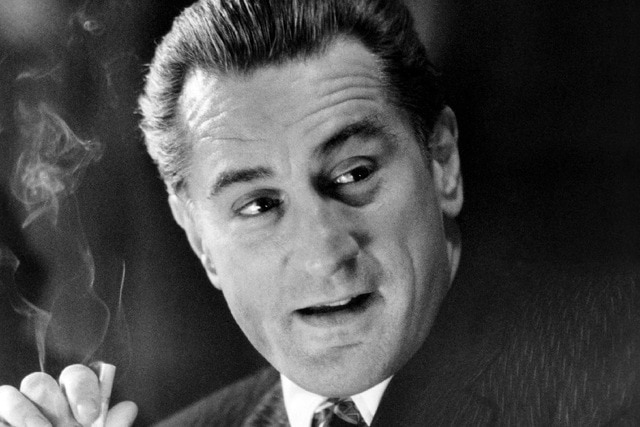 Don’t get me wrong; Taven was good and got better as the match went along. But for the majority of this match is was all about the Caveman. Unlike last week when he was trying too hard to get the match (and this feud) over, Cav kept things simple and less crazy this week and was all the better for it. He was tremendous from open to close in this match, and kept it humming until Taven was finally able to keep up with him at the end. The interference wasn’t that bad either, with Rush getting involved but not too much, while Volador saved his involvement for a great suicide dive towards the end. I wouldn’t say this was a barnburner that many would’ve thought, but it was a very good match and did have the crowd on its side, which I was not expecting. Perhaps there is hope for the Aniversario main event after all!

I’ll say this much; this sure was an interesting match. In any other circumstance I think it may have worked. CMLL was (rightfully so) all in on Los Ingobernables tonight and thus made it an Ingobernables style match; lots of brawling, chaos, the whole shebang. Some of it worked, especially when (surprise surprise) LA Park was involved. It didn’t matter if it was Rush, Naito or even Bushi or EVIL; the Chairman was as electric as always and even brought back some old spots from the WCW days (like the strut while carrying BUSHI, which I marked out for). And therein lied the problem. The best parts of the match were LA Park vs. The World. And just like with the Aniversario main event, CMLL’s booking of this match insisted that the best thing for this match was for LA Park to be a side character in favor of Rush vs. Volador.

As the gif illustrates, it didn’t work sports fans. In one notable instance the fans booed Volador and Rush when Volador removed LA Park during a stare down with his rival. It didn’t get much better from there, and Park’s numerous spots with BUSHI, while good, easily came across as annoying after awhile. It didn’t help either that Park didn’t get to work much with Naito because Diamante Azul, much like he did in the Okada match, seemed determined to try and create a feud with the New Japan star in hopes of…I’m not really sure? Needless to say it didn’t work and unfortunately the Naito-LA Park spots were few and far between. This was all the dangers of the match and any other promotion would’ve spotted this and shifted things around. Not CMLL; instead they steered into the skid and are continuing their tumble down the mountain. Alright maybe that’s too harsh. On the whole the match wasn’t bad (in fact it was mostly good) and the Ingobernables stuff before and after the match was quite the treat. It just doesn’t change the fact that much of this match illustrated that CMLL continues down a path that no one wants. What a pity. They best be setting up LA Park vs. Rush immediately after the Aniversario at this point because otherwise it’s going to be difficult to get excited for CMLL the rest of the year. Hell it’s difficult just getting excited for them a week from now. AND THAT’S DESPITE THESE SHOWS NOT BEING BAD! Only in CMLL sports fans.

And with that I am off to pass out while Rick and Morty plays in the background. Good shit. See you tomorrow for more Expo Lucha sports fans. TILL THEN! 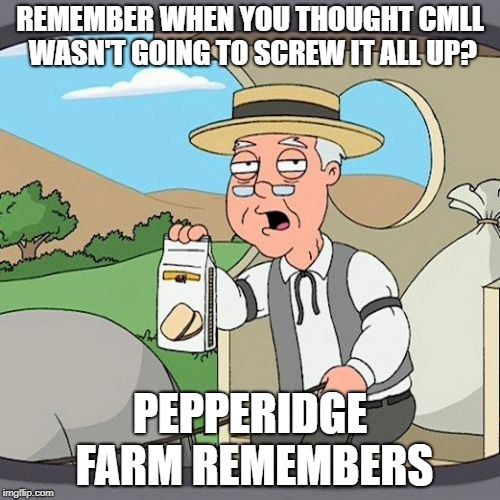