So here’s the bad news sports fans; tonight’s CMLL Super Viernes was, for the most part, the humdrum show you were expecting…with one exception. And by Grodd it was a good exception, as the semi-main event of tonight’s show featured some of the best wrestling CMLL has produced in quite some time. I’m not even talking about a good match either sports fans oh no; this was a legitimately great match and something that could be construed as positive momentum for a CMLL that has been colder than Mr. Freeze’s hideout. Of course they proceeded to shoot themselves in the foot with the main event angle, but let’s just ignore that for now and focus on the good! Or at least prepare ourselves to focus on the good; there are four matches to review before that after all. Let’s rock!

You want to know the most amazing thing about this match sports fans; it went three falls, despite the fact that I don’t recall the second fall at all! For all I know CMLL may have made it up while I was not paying attention, which in fairness was a bit because I was finalizing booking plans for my All Japan file in TEW. In any event this match was pretty much what I said it would be in the preview; the sun rose, the sun set, Fantasy got in that gorram Spanish Fly and nothing else of note appeared to happen. Such is life in both the CMLL opener and the CMLL Mini-Estrellas division, two things that couldn’t be deader if they stared in a remake of Kenneth Branagh’s Dead Again. What an underrated Branagh film by the way; other than Hamlet and Henry V it may be his best work. Yes; this opener was so boring that I am now discussing the work of Kenneth Branagh and I don’t care who knows it!

Remember how I was apologizing to Dalys in the preview yesterday and saying how bad things would be without her? In the words of Social Distortion, I was wrong. Granted this match still wasn’t any good but it wasn’t any worse than the matches we usually get with The Dalys Show, thus proving that we may not need Dalys after all. Really the problem with this match wasn’t so much the work (though there were moments of sloppiness) as much as these six aren’t just interesting. I’ve seen Marcela, Princesa Sugehit and Amapola wrestle a million times now. They’re not bad and can be good, but unless it’s against something interesting they themselves are just kind of dull. That goes double for Lluvia, Comandante and Tiffany. As such this match wasn’t that badly worked and around the usual average for a CMLL luchadoras match…and that’s still not a good thing.

It wasn’t even a month ago where Universo 2000 Jr. was putting together a career best performance winning the Copa Jr. against Guerrero Maya Jr. You’d have never known that happened by watching this match, where Universo did all but break out into the classic Buffy song “Going Through the Motions.”

It was so bizarre sports fans. The match featured Universo in control early…and all he did with it was move around sluggishly, hit a few moves and do nothing even remotely exciting. Perhaps the plan was for him to be as dull as possible so Esfinge could look better. If that was the case then bravo; this wasn’t a master class performance by Esfinge but he at least wrestled like he wanted to be there, bringing some nice energy while he spammed every dive he knew. It was a million times better than what Universo brought to the table and was enough for me to at least say this match was fine. I wasn’t even bothered that Esfinge won, even though Universo shouldn’t really be losing after winning that tournament last month. Then again if you’re just going to lay eggs going forward, does it really matter?

This really was a match where you watch it, sit back afterwards and go “this really would’ve been better if CMLL had put any other rudo team out there.” That was the difference here sports fans. That isn’t to say this was the best night in the history of Los Laguneros Divinos because it wasn’t (even Blue Panther had a few off moments trying to put a submission on Felino). Despite that (and despite Blue Panther Jr. seemingly doing nothing of note) those guys were easily the highlight of this match, with Blue Panther, at 59 years old, putting together yet another strong performance he shouldn’t be able to pull off at this age. With anyone else this was a good match. Instead they got paired with Felino (who admittedly did try hard), an Ephesto who was rendered banged up after an unfortunate mishap on a fall one suicide dive and a Vangellys who couldn’t be useful if he changed his name to useful. With only Felino adding anything to the match it was as if the Panthers were working with just themselves for long stretches, and as such I couldn’t help but come away feeling their efforts were wasted. And that was before CMLL ended this match with a foul, potentially suggesting we’ll get this matchup again! Further proof that CMLL hates us I reckon. A tip of the cap to Blue and Black Panther, but besides that this match was in desperate need of new rudos.

Just when all hope seemed loss, just when I was wondering if CMLL was ever going to produce something great ever again, in rode Atlantis Jr., Star Jr., Valiente, Hechicero, Templario and yes, even broken down Rey Bucanero, on six white horses to deliver us the best thing CMLL has produced in…weeks? Months? There’s definitely been a few things here or there that were quality (and probably almost as good as I’m remembering now) but it’s been so dire on Friday nights in Arena Mexico that I can’t remember the last time I felt this good about a match when it was over. This ruled!

You know what the best part of this match was sports fans? Even now that it’s over I have no qualifiers about it. There wasn’t a flaw or two here that you could argue brought this down or anything like that. No this was an honest to Grodd great match with six great performances. This may have been the first time Hechicero, Rey Bucanero and Templario have ever teamed; you wouldn’t have known that by how well they clicked. They had tremendous triple teams everywhere you turned, the sort of stuff the that pops off the page the way the Dinamitas work used to do. This was three rudos willing to go the extra mile to a) make their team work and b) make the technicos look good and they succeeded. They also succeeded individually; Rey Bucanero threw himself into everything in this match (there were bumps you wouldn’t think he could take that he did) and turned in an old school Rey Rey Buc performance, while Hechicero and Templario were as world class as ever. It had to be a breath of fresh air for young technicos like Atlantis Jr. and Star Jr., who don’t normally get this level of talent to work with. They took advantage of the opportunity with some of their best work in recent memory, while Valiente turned into big match Valiente right on clue. If you want a match that is well paced with some great offense and cool dives that you haven’t entirely seen before, this was exactly what the doctor ordered. It’s a travesty that it’s taken this long for CMLL to have a match of this quality again by my goodness I will take it. In my opinion, the first great match from a major lucha libre promotion this year.

For a moment, around the time Gran Guerrero caught a Volador dive and turned into a powerbomb into the turnbuckle pole, it looked like CMLL may ride the wave of momentum and even get this main event right. Then the match ended in the second fall with Gran Guerrero losing his mask on a hurricanrana attempt by Mistico…and whether that was planned or not, it still gets the same response from Sonic the Hedgehog.

What a pity; CMLL was on the verge of something and then couldn’t get out of its own way yet again. The good news is that the post match was semi-strong as a way to make up for the finish, and it did seem like CMLL was setting up Mistico vs. Gran Guerrero for next week. I know Mistico can be hit or miss but he has the potential to be great, and Gran Guerrero is pretty much great all the time (he was easily the best guy here) so that has a real shot. Alas I’m not quite sure it made this match worth it given how it ended. Oh well; we’ll always have the semi-main sports fans and that’s what is most important.

And on that note I am off to watch Angel and possibly that semi-main again! It was that good. TILL NEXT TIME! 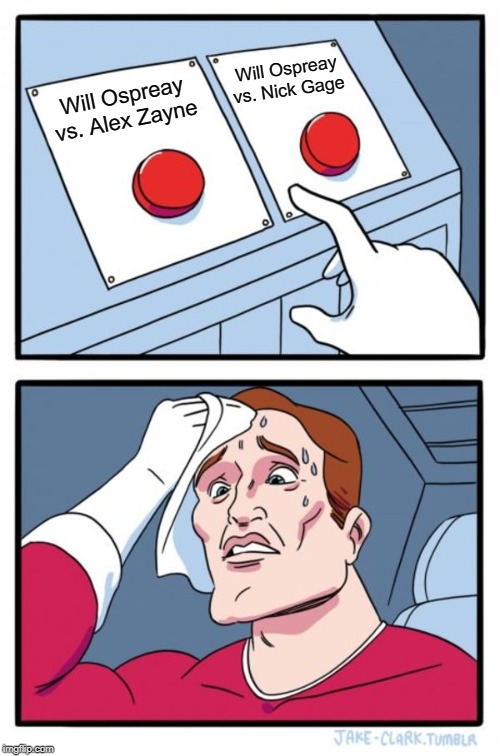 The 27th Anniversary of AAA!