I’m going to get right to the point sports fans; last night’s CMLL Super Viernes sucked. It sucked long, it sucked hard, the best match was arguably the opening match and why the hell am I still talking about this? Oh right; because I have to type nearly 1,500 words now about why this show sucks. What am I doing with my life? Let’s get started so I can move on already.

Maybe it was because I was watching Orange Cassidy being entertaining at the same time this match was going on but I didn’t loathe this. Then again maybe it was also because Magnus and Príncipe Diamante won while actually giving an honest to Grodd effort. Mind you that wasn’t enough to make this a good match. I can’t recall a single thing El Coyote did in this match and it was still more than I noticed from the always dreadful Hijo del Signo. But both technicos were trying, with Diamante in particular having a few cool moments, and that was enough to make this slightly better than the usual CMLL opener. Such a high bar to clear I know! And no, it wasn’t good enough for Magnus to get his gifs back. There’s always next week though!

I have three nice things to say about this match sports fans. First, Sanely had a few really good sequences early and may actually be decent if actually given a chance. Second, Dalys for the most part was on her best behavior for the first time in eons. And finally, Shoko Nakajima was good and would’ve been even better if she didn’t have to work with Dalys and Reyna Isis all the time. Unfortunately she was because this is CMLL and the next good CMLL luchadoras match will be about five years from now after Dalys retired. It doesn’t matter how good you are who is brought in; at the end of the day all CMLL luchadoras matches are the same and even with Nakajima this was no different. A snoozer and a half this was.

Audaz and Hijo del Villano III were both counted out

I have seen some complete embarrassments in my day…but holy shit this may top the list. Let’s review here sports fans. First we had some actual nice sequences in the ring to start it off. Then we had Audaz try a suicide dive, only Hijo del Villano III was too busy posing for the crowd to nice and wasn’t in position, leading to Audaz nearly killing himself and Villano nearly blowing out his legs. They recovered nicely from that point with some nice work on the floor…only for Pompin to count both guys out at the 3:17 mark to end the match! That’s right; the match ended at 3:17 on a Double Countout.

Holy shit. I blame everyone for this stupidity. Audaz and Hijo del Villano III were obviously dealing with a shithead but they should know at this point that Pompin is a shithead and should’ve done something to break the count momentarily. They do deserve some blame. Of course they don’t deserve nearly the blame Pompin does for doing something no other CMLL referee would’ve done. I’m sure he’s a good dude, I know he’s worked there for a long time…but boy he needs to be sent the way of Tirantes. This is about the fifteenth match he’s ruined this year and it’s not going to stop until CMLL does something about it. Then again if they did nothing the first few times then this embarrassment won’t matter anymore than the others. So yeah; train wreck. Absolute train wreck. I was legit wondering why I was still watching CMLL at this point of the show.

This match was at the wrong place at the wrong time. For one it followed the last match, which was terrible and left me in a mood fouler than Joaquin Phoenix at the end of Joker. Second, everything in this match seemed to be a bit off. The effort was certainly there from the technicos to make this a good match and on the whole I thought Dulce Gardenia and Star Jr. looked as good as they could. But nothing else about the match worked. Fugaz tried hard and the fans wanted to like him, but everything he tried something he would wind up getting dropped by the rudos (most notably Luciferno). The momentum of the match was stilted due to the technicos rallying late to win fall one, then not having any control in fall two. And though I didn’t think Los Hijos del Infiernos slacked off, it was very apparent that Ephesto, Luciferno and Mephisto were the wrong opponents to try and keep up with livewires like Dulce, Fugaz and Star Jr. Throw in another finish that saw Star Jr. get unmasked for a DQ that then went nowhere and…yeah. It was better than the last match but that bar was so low to clear that it would’ve been embarrassing if they hadn’t. If I’m Star Jr., I’m beginning to wonder if maybe I would’ve just been better off where I was.

This will be a first sports fans; I’m basically lumping both of these matches together and reviewing them as one. Why? Because they basically are the same damn match; each had six really talented luchadores, each went three falls, each had maybe one guy that seemed to give a damn and like me, each match felt checked out by the time the second fall began. They were basically the same match, just with different people. And I couldn’t have given a shit less about either.

Like I don’t get it; if they wanted to, all twelve of the luchadores in this match could have barnburners. So why does it feel like only Cavernario, Mistico, Soberano and maybe Negro Casas were trying? Hell for all I know they weren’t because maybe their coasting just looks a lot better than the others. The point is that these matches felt comatose. There were no stakes, no emotional investments, nothing that remotely stood out. It was the same damn thing we’ve gotten for the last several months, hell last several years, from these CMLL trios matches in the semi-main/main events; guys do the same formula, there are a few dives and afterwards nothing feels like it mattered. Maybe the guys are bored. Maybe the guys have had the will to live sucked out of them after bad programs. I don’t know. I just know that these matches did nothing for me, making it easy to switch over and watch GCW. And again, these guys are supposed to be stars. Carístico, Último Guerrero, Valiente and Volador Jr. are supposed to be top draws/main eventers. Cavernario, Mistico, Titán and Soberano are supposed to be some of the best luchadores in the world. The gorram Dinamitas, who have cratered faster than Ben Affleck’s career post Gigli, are supposed to be a top trios team always coming up with new stuff. Instead the top stars feel bored, the top workers feel stifled (and possibly bored themselves) and the Dinamitas feel like both with a smidge of giving up thrown in. And thus all those things came out in these two very similar, very mediocre matches where nothing mattered. I should’ve known the moment Audaz-Villano shit the bed that the rest of the show would as well. What a waste of a card that should’ve been so much better, but was instead the same old shit.

I’ll see you either later tonight or early tomorrow for an AAA review sports fans. Till then. 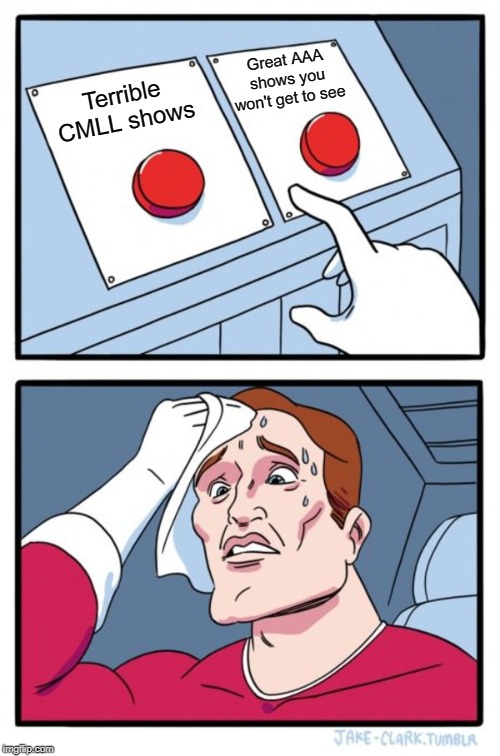