Let’s just cut to the chase sports fans; tonight’s CMLL Super Viernes show was exactly what it looked like on paper. The matches that were expected to whelm, whelmed. The matches that we thought would deliver delivered, although two of the matches delivered a little less than expected and one delivered far more. The issues expected to plague the main event plagued the main event. And at the end of it all most of us still had a good time anyway. Now let’s review it so I can go find a movie to watch as I fall asleep.

If you watched this match, and then went back and read my preview, you will see that I got this match 100% right. It’s like I can see the future or something! But yeah, this (unfortunately) played out exactly as you’d expect. The one exception may have been Espíritu Negro, who had a good showing by his standards. Otherwise Super Astro Jr. was really good, Robin looked like someone who was dead inside (save the odd sequence or two) and Hijo del Signo continues to be useless. And so The Ballad of the CMLL Opening Match Technicos continues.

Admittedly this may have been a moment where I saw double sports fans but I’m pretty sure this match featured Tritón doing not one, but two stages dives onto Tiger, back to back! We rarely ever get stage dives to begin with and there’s Tritón doing two in rapid succession. You think he and Tiger want this feud to happen or what?! Too bad they’re going to get the Mean Girls treatment. 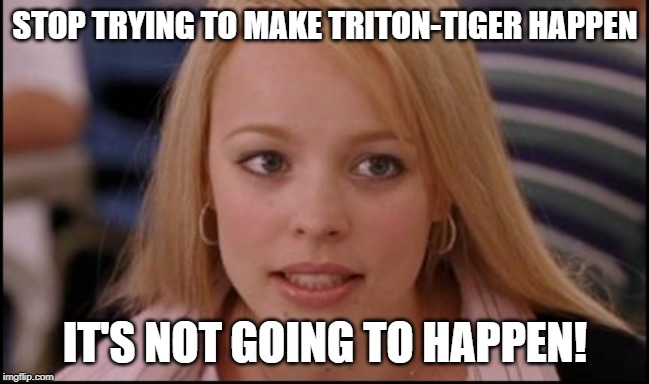 Anyways, this match wasn’t all that exciting outside of that moment but it was really smooth and really well worked. So well worked that I’m willing to say this was a good match, even though it really felt like it was missing an extra kick to reach another level. Virus and Fuego were so smooth in their sequences together, Disturbio was entertaining, Drone was good Drone more than he was bad Drone tonight and the Tritón-Tiger issue definitely continued in a way the Black Panther-Kawato one didn’t a few weeks back. It also seemed to end decisively with Tritón pinning Tiger with a 450 to win the match, though he did follow Tiger afterwards so who knows. Again, it probably could’ve used a bit more kick but the work was really well done so it’s difficult to be too hard on this bout. A good match.

If Hijo del Vikingo vs. Laredo Kid could exist in trios form, it would look something like this match. My goodness sports fans; this B for batshit and I for INSANITY!

Now if there’s one thing that does separate this, the best match I’ve seen in CMLL all year, from Laredo vs. Vikingo, the best match I’ve seen PERIOD this year, it’s that this match wasn’t entirely smooth like the AAA classic was. There were spots where things didn’t entirely go the way they should’ve, most notably Templario slipping on the ropes going for a dropkick (he recovered as best he could) and Flyer having a tough time with a Canadian Destroyer (just to name a few things). But the ambition on some of the ideas that didn’t come together were still admirable, and in the end more things than not were spectacular, particularly in the third fall when the match just kept going and kept getting crazier. There was the rare triple dive sequence from the rudos early in the match, Audaz and Soberano doing out of this world dives/hurricanranas, an Audaz rana on Templario TO THE FLOOR and a Flyer Spanish Fly on Kawato TO THE FLOOR!

The latter was so insane (and done by two guys most people don’t trust) that you would’ve thought it would’ve failed, but Flyer and Kawato nailed it perfectly to make the moment the likely highlight of a match full of them. And they weren’t just great there. Even with his slip up earlier Flyer was looking the best he had in months, his confidence recharged with so many talented rudos to work with. And I’m not sure how we can deny that Kawato is now good; this is his fourth straight good to great performance in a row and likely the best performance of his career. He and Flyer were the question marks and they both delivered huge, which was all that was needed as the other four guys, particularly Audaz, Hechicero and Soberano, were out of this world. It’s nothing new for Soberano (he’s been devastatingly good the last several weeks) but both Audaz and Hechicero had gone a bit without getting a shot to deliver this level of performance, and they reminded people tonight why they are world class. Maybe there was a smoother, more complete match in CMLL this year, but I haven’t seen anything in the promotion that was this chaotic and this much fun this year. I loved it, and would call it a true Match of the Year contender. Seek this shit out.

This poor match; any other night it would’ve been the bell of the ball. Tonight it had to follow the roller coaster to end all roller coasters, and thus was never going to be able to keep up. Even still this was good fun for how long it lasted. Titán didn’t really to get off any big dives as per usual, but he was more than serviceable in a match that was mostly built around Negro Casas still being really good. And what do you know; Negro Casas was really good working his usual style match, complete with a few unusual moves like an excellent second rope DDT. I would’ve given this a little more time, given Titán a bit more to do and put this on a different show, but the match was enjoyable all the same and a good follow up to a match that absolutely couldn’t be followed.

I’m torn sports fans. On the one hand, a good deal of this match was BRUTAL! Ciber the Main Man was so shot during this match that he made Bestia del Ring look like LA Park; he couldn’t even do a chokeslam on the UG that was better than Undertaker’s chokeslam on Goldberg, and we all remember how that went. On the other hand, the rest of the guys were at least trying really hard. Gil Muertes and The Chris weren’t great, but they had nice moments here and there, and the Guerreros had good nights given what they had to work with (especially Euforia). I guess the thing that will break the tie is the fact that UG then challenged Ciber to a match afterwards, which means we’re getting more of this…which means I am out, all out AND NOTHING BUT OUT! I already had to watch the UG waste time with Máscara Año 2000 of all people in a hair match; to see him go from that to Ciber is pretty lame. Hopefully it’s leading somewhere else for the UG because more of this isn’t the answer. Easily the weakest thing on the show.

What a contradiction this match was sports fans. At times it was exciting. At times it was boring. At times Rush looked like one of the best performers in the world. At times Bestia del Ring looked like he needed to be flat out banished into the La Máscara zone. Through it all it somehow felt like CMLL was somehow going to be able to pull out something memorable in the end…and then they did for all the wrong reasons. 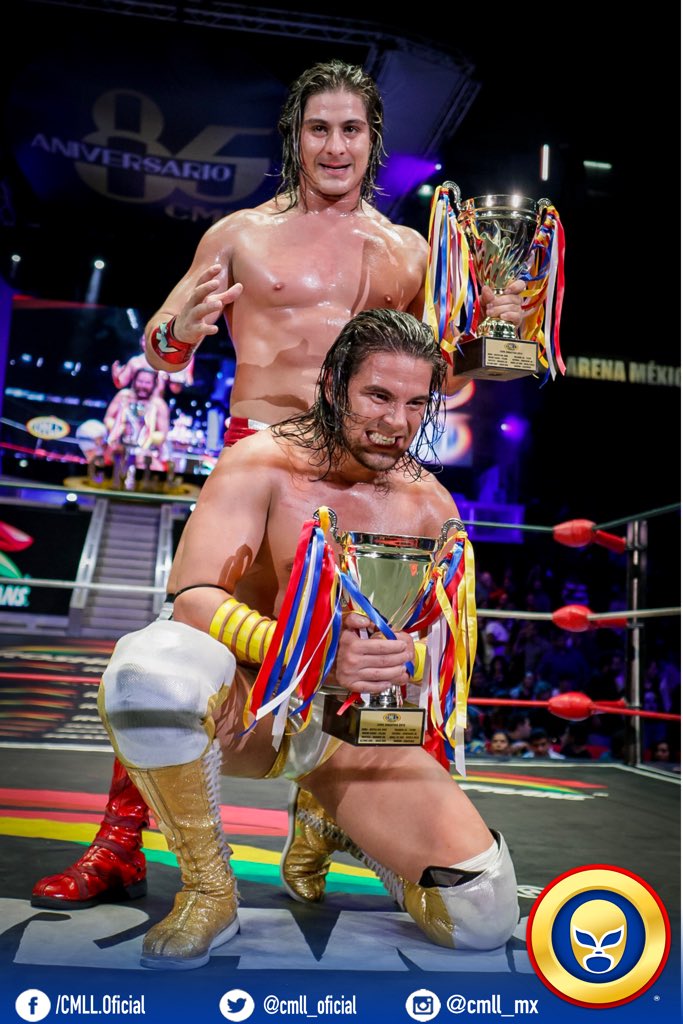 So yeah; this was a mixed bag sports fans. The plusses are that the three people you expected to be good were. Ángel de Oro and Niebla Roja worked their asses off, and Rush wrestled this match as though he could will it to greatness all by himself. In another situation he may have done so. The problem is the issues coming into this match reared their ugly head. Bestia del Ring tried his damndest and for awhile was actually doing okay, but he ran out of gas the longer the match went and forgot the most important moment of the match (more on that in a second). And while they were better tonight than they were a few weeks ago, Rush and Ángel de Oro still had little chemistry overall, which may have been salvageable if the ending hadn’t featured Bestia forgetting his cue to distract Edgar, leading to Rush hitting a Martinete on Oro in plain sight of the referee, followed by Oro low blowing Rush in front of the referee to steal the match…with no one getting DQ’d. You’re not getting many more finishes this year worse than that sports fans. I wouldn’t say it crippled this match because the match was, at best, just fine prior to this. It more or less just confirmed that this pairing was a bad idea for the Copa Dinastia final, as well as a big shame for Oro and Roja, two talented guys who deserved a better match and finish to go along with their victory. Hopefully they’ll get something better down the road. In the end this was a tournament final that at best will be remembered for its terrible finish and otherwise will be forgotten instantly. At least CMLL didn’t set up anything between the two sides for the Aniversario, which would’ve been tragic.

There you have it sports fans. Unless some news breaks or a new project is complete I’ll see you next week for the Puebla results. TILL THEN! 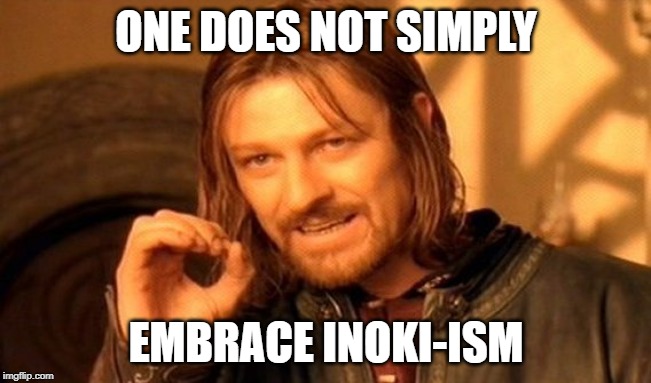