There are two ways to look at tonight’s CMLL Super Viernes sports fans. On the one hand, they needed to build heat for their two upcoming hair vs. hair matches (Kaho Kobayashi vs. Amapola, Último Guerrero vs. Máscara Año 2000) and they did that pretty well in my opinion. On the other hand, they also needed to have some good matches and that didn’t exactly happen, unless you count Soberano’s great performance, the too short Lightning Match and the too short semi-main. It appears we will be having some interesting matches of note in CMLL soon (especially with them announcing Matt Taven’s return tonight); it just wasn’t this week. And on that uplifting note, let’s start the review!

To call this match lame sports fans would be a compliment. Holy shit was this a terrible start to tonight’s show, so bad that if I were Magia Blanca I’d be high tailing it out of CMLL this instant. Despite being the most talented dude in this match Blanca’s offense pretty much consisted of a tornillo in fall two and a Small Package to pin Espanto in fall three. Otherwise he was a supporting player to Stigma and the rudos, three dudes who combined for at least four botches, a bizarre fall one sequence where all three guys seemed to have no idea what they were doing (and this was for something as simple as a Codebreaker double team) and nothing even remotely passing as interesting. This was boring, it was poorly worked; it was like most CMLL openers this year. Poor Magia Blanca!

This match may have well been the remake of the two part X-Files episode “Nothing Important Happened Today.” Fortunately that meant this match was still a million times better than the opener, and in its defense it still featured some pretty cool shit. Kawato had what most would consider one of his better CMLL performances of late, Drone, Fuego and Maya were all solid and Pólvora wasn’t half bad either. That left Fuhrer Bison to try and weigh this match down, and he almost succeeded a few times, especially at the end of the match where he tried to cause a rope break because…who the hell knows? Luckily he was more a minor annoyance than anything else. Again, nothing really happened outside of a few cool Drone moments but this was at least watchable, whereas the opener was like watching Movie 43 on one screen and New Years Eve on the other.

Kaho Kobayashi and Amapola were both Counted Out

This match was all good news sports fans. First, I called this match going six minutes and gorramit I was right! There are the moments you savior sports fans. Second, CMLL actually came up with a decent non finish to the match by having Amapola and Kaho both counted out after they couldn’t stop beating the crap out of each other on the floor. And third, this was easily better than what we got in the first and second match. Overall a success all around.

Granted, this wasn’t what I would say was a great match and not even necessarily a good match. But it did exactly what it needed to do given we’re getting a longer, higher stakes match between these two in a few weeks, and that’s give us a taste of what’s to come without giving everything away. I thought the six minutes was the perfect amount of time, I thought both Amapola and Kobayashi gave a good effort (and looked good overall) and I thought they did so without breaking out any big tricks they should be saving for the big match. In other words, this was exactly what it needed to be. Maybe not the best match in the world, but it was, at worst, highly watchable and it succeeded where it mattered most in getting me excited for the hair match these two will have.

At this point this show was starting to look like the polar opposite of last week’s AAA shows; the rudos couldn’t win and the technicos couldn’t lose! Unfortunately for CMLL the match quality was at the same level of the AAA shows as well. This was quite the slog for the first two and a half falls, with Atlantis and Villano IV both looking old (though Villano IV was at least trying), Rey Rey Buc doing little and Hijo del Villano III doing a lot, just not well. Things finally picked up towards the end courtesy of, you guessed it, Soberano Jr. The man is just too good right now sports fans. He didn’t break out his best stuff but by just being active and exciting he, along with Atlantis Jr. to a degree, was able to turn this match around and end it on a high note. Can we get a big match for Soberano already?! He’s certainly earned it with performances like this; now he just needs CMLL to finally put him in a match worth a damn. This wasn’t it, despite his effort and Atlantis Jr. doing okay.

Finally…FINALLY, the rudos got on the board! And in two falls no less. This calls for a gif of NPH on a unicorn.

What a pity this was only two falls because this was actually pretty fun for how long it lasted. I don’t know how the UG did it but he managed to make a brawling segment with Máscara Año 2000 entertaining. It was in some ways straight out of the apron exchange he and LA Park had in Puebla back in March, and it worked just as well here as it did with Park. I’m not sure if it’s enough to convince me the UG can get a good/great match out of Máscara, but my confidence is growing. Everything else was pretty solid too. Cuatrero and Sansón weren’t great (and had a weird moment on a double team earlier) but they were still solid overall. And my Grodd have Euforia and Gran Guerrero made these matches super fun. Gran Guerrero continues to evolve into one of CMLL’s most consistent workers and Euforia was out there looking like his son, Soberano Jr., at times. How does CMLL not have more for him to do?! It’s just a shame this was so quick; with another fall and a few more cool spots this had a shot of being good. Alas it was merely fun while it lasted, while doing what it needed to do in building the UG-Máscara up further.

So Dragón Lee did indeed show up for this match sports fans. In retrospect I’m not sure why because all he did was get beat up, hit one dive and have a few sequences with Negro Casas. I guess he really wanted to do that before disappearing to New Japan for the next few months. In any event this was one of those passable but unspectacular CMLL main events, as if you couldn’t have guessed. Everyone was fine, but nothing really happened and, as expected, nothing was built to coming out of this match. It was just one of those bouts to send the Arena Mexico crowd home happy, and one that had all of us at home waiting for it to end so we could see the end of Golden State-Houston. Never a good thing. A fittingly dull end to a mostly dull show.

And with that sports fans I’m off to play some FIFA! Till next time. 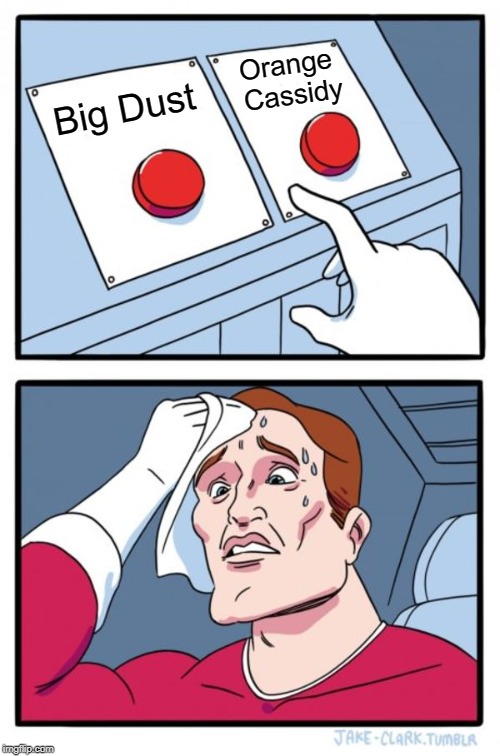 ¡CARTELERA FINAL THE BEST OF THE SUPER JR NJPW!