Last week I went into CMLL’s Super Viernes wondering why the hell I was still watching the show. This week? Same thing! The good news is last week’s show ended up pretty good thanks to an awesome Lightning Match turned regular match between Cavernario and Titán. Could the same thing happen this week with Titán and Templario? Probably not. They’ll still have a good Lightning Match though, while the rest of the show will likely blow. Let’s break it down!

What to Expect: I’ll say this much sports fans; there’s no grumpy old luchadores in this match. Thus, even though there will be approximately no dives or no cool moves, it’ll at least be a competent boring opener as opposed to a terrible boring opener. I don’t know about you but I’m taking that win.

Winners: Coyote and Grako take it in two falls, extending Astral and Robin’s losing streak to over 9,000 matches. Give or take.

What to Expect: You know…I think we were actually close to a potentially good luchadoras match here. I’m serious! The technica team is very good, Dalys and Metálica are reliably solid if nothing else; replace Tiffany with almost anyone and we’re in business. Alas Tiffany is here, she’s still very bad, and she’s feuding with a supposedly incoming Sexy Star, meaning Sexy Star could be interfering in this match and if you don’t get the picture by now you never will. The lesson as always sports fans; when choosing between Amapola and Tiffany, ALWAYS go with Amapola, even if her peak as a good worker is eroding faster than Green Book’s credibility.

Winners: Dalys and her minions take this in three falls. Unless Sexy Star shows up; then it’ll be two.

What to Expect: This match is the difference between AAA and CMLL in a nutshell. In AAA, a great trio of high flying technicos would be working Poder del Norte on this spot on the card. In CMLL, Audaz, Flyer and Rey Cometa are stuck working with Hechicero, a Felino who only seems to try when teaming with his son, and the M. Bison cosplayer who got go away heat for getting a CMLL World Heavyweight Championship shot in Arena Puebla. ARENA PUEBLA! Those people give Policeman a pass for crying out loud. The good news is Audaz is so good and Rey Cometa will be motivated enough to keep up with him that they, along with Hechicero, might be able to turn this into something. All that’s needed is for Flyer to keep it clean and for Felino and Vangellys to just be in the right position. If all that happens, this will be good. Spoiler; it will probably not be good.

Winners: The technicos will probably win, but this is CMLL; you can never trust them to get the result right. Thus I’ll play it safe and predict a three fall victory for the rudos after Vangellys pins Audaz. It doesn’t get any more CMLL than that finish right there.

What to Expect: What do you want me to say here sports fans? Titán is white hot right now. Templario is excellent. Combine those two facts with the state of the rest of this show and this is easily going to be the Match of the Evening. Doesn’t matter if it goes 3 minutes, 5 minutes or 10 minutes; it’s going to be the Rami Malek of this bunch. That said I do have a suggestion if CMLL wants to make it even better. 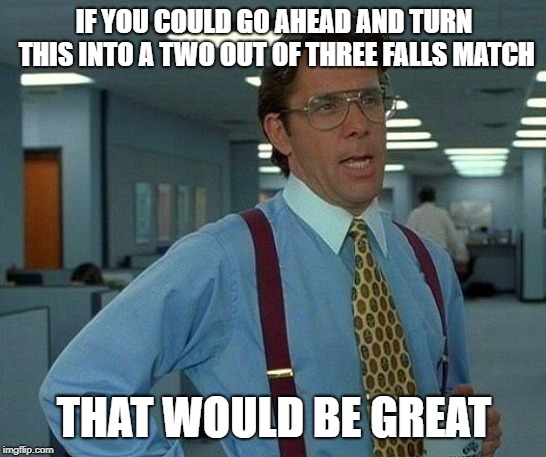 Winner: Titán’s one week hot streak comes to an end as Templario defeats the technico with a Top Rope Gutwrench Powerbomb at the 7:45 mark. Why 7:45? Why not is the real question.

What to Expect: There’s only one way to begin breaking down this bad boy. 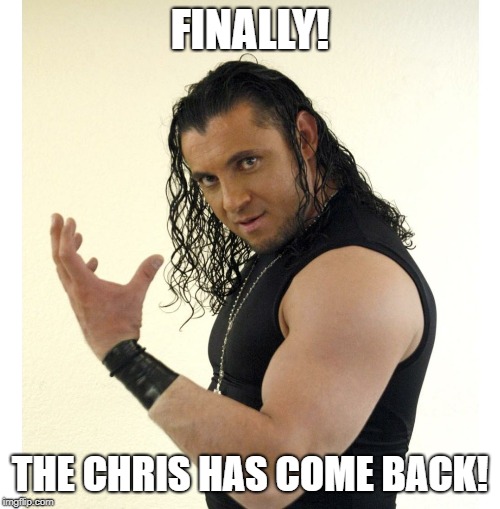 And now we can begin. Boy do I wish we didn’t have to because I’m not sure how this match winds up being good. Sure Carístico and Valiente will try and, Grodd help me, The Chris isn’t actually that bad. He’s not even close to good but he’s at least able to move unlike Ciber and Gil. And that’s the problem; whoever is working with Ciber is likely to get very little out of him, and we all know Diamante Azul and Gil Muertes are throwing down again. It was fine last week…I wouldn’t bet on it being that way this week.

Winners: Gil Muertes hands the technicos a victory by fouling Azul for the DQ to set up a singles match next week. Finally we’ll get to see what it would be like if Raditz cloned himself and they fought.

What to Expect: And now it’s time to build for the Homenaje a Dos Leyendas main event that would’ve been so much better if Ángel de Oro and Bestia del Ring just took the day off. That or if Rush had actually be available. DAMN YOU RING OF HONOR! At least this match should have some decent moments. Sure Volador will be coasting more than LeBron James on defense but even coasting Volador is fun, and you know Oro, Roja and Terrible will be trying to give this match heat. It’ll be fine; it just won’t be good because there will still be too much Bestia del Ring.

Winners: Our second straight DQ of the night (potentially the third if Sexy Star does show up)! Los Ingobernables will do something to foul either Oro or Roja in fall two to give the technicos a quick victory. I’ll be daydreaming about the AAA show on Sunday by this point for those curious.

And I’m spent. I’ll see you tomorrow for a review of this show sports fans. TILL THEN, me when I learned my cousin is playing the Kevin Bacon role in his school rendition of Footloose. Congrats Cameron!