It’s Thursday, Thursday, gotta do a CMLL preview on Thursday. Yes, that just happened and no, we aren’t going to dwell on it. Well other than the CMLL preview part. Super Viernes is merely 24 hours away, all the FantasticaMania talent has returned (save Negro Casas, who is sticking around with Dalys in Japan for a few more days) and CMLL is taking advantage of it by doing a show in memory of the late Mr. Niebla. So of course this show looks nothing like an actual tribute to Niebla, instead coming off as a lifeless cash in by CMLL with little or no effort actually put in to honor the recently passed luchador. I may feel different about that tomorrow after they actually do a nice ceremony for the man but right now the only difference between this Niebla tribute show and a regular Super Viernes is that CMLL stuck Niebla’s name on the poster. Classy. And on that note, let’s start the preview!

What to Expect: Hey look guys; Halcón Suriano and Magia Blanca are back. Now they can do what they were doing before, which is watch their careers slowly fade away while Espanto Jr. fails to base for yet another move of theirs. At least they’ve got Akuma, who will do enough to give Suriano and Blanca a few decent moments before the night closes in on yet another mediocre CMLL opener.

Winners: CMLL values Espanto Jr. over Blanca and Suriano and…yeah, I can’t believe it either. He and Akuma take this in three falls.

What to Expect: You can tell this is a bigger show than usual for CMLL given that Drone, Fuego, Maya, Tiger and Virus are all down in the two spot instead of the third. You can also tell it’s a special occasion because Olímpico, long time Niebla associate, is here. Anyone want to take a stab at his last Super Viernes appearance? Anyone? It was April 22, 2016! That’s right; the last time Olímpico appeared on a Friday night CMLL, the Cubs still hadn’t won a World Series, Donald Trump was thankfully not President and the biggest movie release of the weekend was Elvis & Nixon, a movie starring Michael Shannon and the now disgraced Kevin Spacey that was written by Wesley from The Princess Bride!

Anyways, this is actually one of the better looking matches on the show. The technico team is a lot of fun whatever way you slice it (with the only concern being if Fuego and Maya are suffering from jet lag), while Tiger and Virus are as good as it gets for midcard rudos in CMLL. It does leave Olímpico as an obvious weak link (and quite frankly the guy hasn’t been good since I started watching him), but he does occasionally show flashes of competence and you’d think he would be trying on this show. I don’t expect a blow away but this has a chance to be a good match.

Winners: I like the rudos again. They take it in three falls.

What to Expect: There’s only one issue with this match…and it’s that Shocker is in it instead of Hechicero. This isn’t to say Shocker shouldn’t be on this show mind you; quite frankly, aside from Cavernario, Felino and Negro Casas, he’s the one guy who is an absolute must for this show given that he was arguably Mr. Niebla’s biggest rival (Niebla did unmask him at the CMLL 66th Aniversario back in 1999). Alas CMLL decided this was the place for him and not, you know, the main event where he could’ve teamed with Carístico and Valiente to take on Cavernario and Felino (Niebla’s stable mates). That would’ve been sensible. Instead the main event is what it is and now the ultra talented team of Soberano, Star Jr. and Titán will have to make due with a team that really isn’t a good fit for them. I suppose there’s still a shot for this to be great if the technicos have a massive night while Bucanero and Terrible step up for them, but my hopes are not high here.

Winners: The technicos should get it here, but I’m guessing CMLL will want to give Shocker a nice moment. He pins Star Jr. to give the rudos a three fall victory.

What to Expect: Hey another good looking match!

Oh wait; it’s got the Dinamitas in it, and now that FantasticaMania is over they’re probably retiring their top tier effort until next year’s tour.

That’s only one of the problems here now that I think of it. The bigger issue is that I just saw Cuatrero, Forastero and Sansón go toe to toe with Ángel de Oro and Niebla Roja for several days in Japan. The only difference now between those matches and this one is a) they’re in Mexico and b) Stuka Jr. is playing the role of Titán, a slight downgrade but a downgrade none the less. Throw in the fact that effort will most definitely not be what it was during FantasticaMania and this feels like a match that is bound to make us think it could be good, only to pull a Finn Balor on us and leave us saying “that’s it?” when it’s over.

Winners: The Dinamitas always win, so why would this be any different? They take it in three.

What to Expect: You gotta hand it to CMLL; when they want to get a sequel done, they get it done faster than the time it took to go from Scream to Scream 2. It hasn’t even been a week since Mistico and Gran Guerrero collided in Puebla for a match that featured a whole lot of mask tears. Now they will meet again tomorrow, in a match that actually has been building for two weeks now and made a lot of sense…before CMLL decided to just randomly do it on a Monday as well. CMLL; where the only thing that makes sense is the way nothing remotely makes sense.

Us trying to figure out CMLL booking

So yes, CMLL most definitely screwed the pooch a bit here with their stupidity. That said I’m still really excited about this match. The Puebla bout on Monday was a good one, and it was good despite the fact that Mistico and Guerrero were clearly saving some of their big stuff for tomorrow. If they can have a good match while focusing mostly on just getting heat, imagine what they can do with a proper tangle like we expect they’ll have for this show? The only way I can see them not going all out is if CMLL has decided that this match is the Homenaje a Dos Leyendas headliner…and while I can see that given that nothing else has been remotely set up for that show, the big matches for CMLL’s big shows have been so disappointing lately that I can’t see Mistico vs. Gran Guerrero (which would be an exciting mask match) actually going down. Thus I expect they’ll work hard, throw as much into this as possible and this match will wind up being very good and possibly even great.

What to Expect: Only in CMLL would there be a show paying tribute to one of their fallen top stars that has a main event where his friends/stable mates are teaming AGAINST EACH OTHER! That’s right; Cavernario and Felino, members of the La Peste Negra stable Niebla was a focal point of, are on opposite sides. Why? Because it’s CMLL, that’s why! Honestly I think it’s best to leave it at that, remind you all that this match is probably not going to be any good and move on before I get so mad I start to see spots. Seriously CMLL; you have the easiest layup ever AND YOU DO THIS?!

And on that note I’m off to do whatever I want. See you tomorrow for the review of this bad boy and…A PREVIEW OF AAA’S FIRST SHOW OF 2020! THE KING IS BACK BABAY! 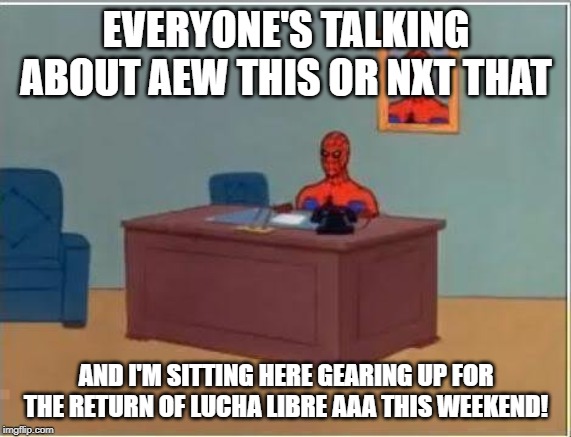