Finally, thankfully, it’s almost time for CMLL Super Viernes to start. The things I’ve done to kill time to get to this point! Alright it wasn’t that bad; I just watched a bunch of Canadian wrestling featuring the likes of forgotten Hart disciple “Pistol” Pete Wilson (how that guy hasn’t made it yet is beyond me), Cam!!ikaze (a personal favorite of mind), the wonderfully named Carrot Adams and Jack Evans back when he was known as “Jumpin” Jack Flash. Thank Grodd he changed that; could you have seen LU or Konnan booking someone named “Jumpin” Jack Flash? My point exactly. But enough about Canadian graps; there’s a live review to do! May it be the last time that Klan Kaoz vs. The Guerreros is involved.

It’s matches like this that make you realize that you really, really should’ve stuck to just watching old Canadian matches for the first twenty minutes of this show. There’s rough and then there was this opener. I’m not going to be too hard on Kaligua because a) he did show a brief flash here and there and b) look what he had to work with! Kubrick couldn’t have made something work with this cast of characters. Alas that’s no excuse for the substandard quality of this match and there felt like at least a dozen instances where I saw one of these four getting lost or mistiming something. Luckily we all knew this match would be lame (though we didn’t know it be without Stukita, which made it lamer) so it’s no real loss. Unless your Kaligua, who got the LU treatment in his first night out. I won’t be the one to tell him that unlike LU, it doesn’t get better for you when you lose your first match in CMLL.

If you ever needed proof that nothing in lucha libre is a sure thing, look no further than what we saw here. This match had all the makings of being a solid match…and then Junior slipped on the banana peel going for his dive off the ramp. Normally this would be a humorous botch, except Junior landed right on his head and, despite trying to continue, looked completely out of it from that point forward. Hell he was so out of it he couldn’t even backbreaker Templario properly; even Junior’s biggest detractors will acknowledge he can hit a damn good backbreaker, so for him to mess that up shows you what state he was in. Credit to Templario for finding a way to quickly work around it and not so much credit to the CMLL medical staff for not immediately pulling Junior after that dive. Like come on guys; he landed flat on his face! That should’ve been it right there and unfortunately they waited a bit too long. As for the match itself, that moment kind of nuked whatever chances there were for something good. Everyone else tried and there were some nice moments, it just wasn’t going to work with one of the guys as out of it as Junior was.

After the ho hum opener and the disappointing second match, this bad boy needed to live up to expectations. Praise to Grodd it did, to the point I was actually posting the Batman gif on Twitter while it was going on. And now I’m going to do it again here!

Now before we get too carried away, there was a point in this match where I was wondering if these guys would get to that next gear in order to deliver. You’d think by now I’d have learned, having seen these guys work together over 9,000 time, to not worry about that sort of thing. Nope! Luckily the match continued to pick up steam as it went along, had some nice moments of levity with a few KeMonito spots and then caught fire the moment Soberano and the Dinamitas started going full speed in fall three. Make no mistake; this was all about them. Valiente and Titán did well but they were very much supporting players. It was otherwise all about the Dinamitas dominating in their usual entertaining style and Soberano breaking out moves that continue to make me so sad we’re likely not getting him vs. Fenix in the near distant future. You gotta love him returning the favor by making the Dinamitas rare high flying stuff look good; that Sansón crossbody to the floor looked to be on the verge of disaster with Sansón slipping on the ropes, only it worked because Sansón is awesome and Soberano moved up just enough to catch him (while also still bumping nicely on the follow through). Great stuff. I’m not sure this belongs in the upper range of some of the other Soberano vs. Dinamita matches, but it was still pretty damn good when all was said and done.

I don’t know; some people seemed to really enjoy it online but I was kind of left wanting when all was said and done. It was still pretty solid when all was said and done. I thought Cavernario looked really strong in the opening stages of the match with his brawling and Carístico’s selling was on point, even later on in the match when things had gotten more even. Even still…it felt like this was missing something, almost as if because of how short this match was these guys had to leave a ton of stuff on the cutting room floor. Certainly not every match needs a million dives, but it felt like this match could’ve used a bit more in that department from Cavernario and certainly could’ve used a bit more pace, as most of the action felt a little too methodical. Who knows? At the end of the day I thought it was a good, solid match, but it felt like it could’ve been even better. Thus, I must confess it was a bit of a disappointment for yours truly.

Dear Grodd this match was somehow even worse than I could’ve possibly imagined. And I figured it was going to be like Paulie Shore’s career going in!

There was approximately one thing this match had going for it; Volador Jr. Unfortunately Volador only got about ten seconds to strut his stuff, with the other fifteen minutes being devoted to Rush and Terrible not giving a shit, way too much Bestia del Ring, Diamante Azul looking like he hadn’t wrestled a match in weeks and poor Atlantis being forced to work too much with the aforementioned Bestia. He couldn’t make that work when healthy, so why CMLL thought Atlantis was the guy to battle Bestia tonight…who knows. Then again you can ask the same thing regarding why CMLL booked the show the way they did. In any event, this was trash and I may be being kind when I say that. Easily one of the worst matches CMLL has strung together since starting their strong string of shows back in May.

I’m pretty sure CMLL was sick of this entire show (as were we all) by the time the curtain closed; little did we know they were sick of this feud long before this show even started! It’s pretty clear now why CMLL didn’t make this a Trios Championship match, as the lack of crowd support for Klan Kaoz and their mediocre performances seemed to have spelt an end for their Arena Mexico run. Unless CMLL really believes them losing in two straight falls was going to help them, which…

I’ll give this match this much; for the third straight time I was surprised by the effort these two teams gave and in the end it was better than it had any right being. What Ciber, Scharly and The Chris lack in talent they make up for in bumping and hustling, and they tried their damndest to make this work while also doing everything they could to make the Guerreros look like monsters. Luckily the Guerreros had that covered as well, pulling out all the stops like they did in the first encounter to make this something worthwhile. You have to appreciate that, especially on a show where the effort was always there. That being said…if this is the last time between these teams (and it sure seems it) thank Grodd. There isn’t anything else that can be done to make this any better and it’s for the best that the Guerreros move on to something more worthwhile while Ciber, Scharly and the Chris return to the indies and their more famous personas. It’s done; it’s over. Let us all just move on.

And that was tonight’s CMLL Super Viernes sports fans. It sucked, outside of the Soberano match, and was probably the worst CMLL show since LA Park returned. Luckily he’ll be back again this week, Klan Kaoz appears to be DOA and all should get back to normal…at least it will if we don’t kill ourselves with fright over a possible cage match at the Aniversario. But that’s a story for another time! For now I retreat into watching a boat load of TV before passing out. Till tomorrow! 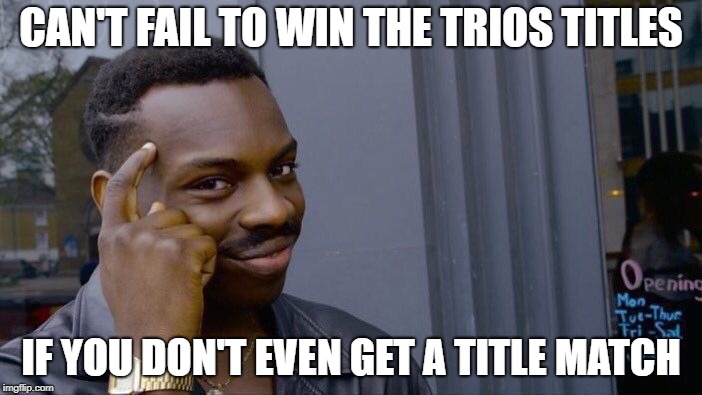