It has been a day sports fans. As I have mentioned before, I am a dog sitter in addition to providing Lucha Central with some really silly columns several times during the week. Generally neither gig gets in the way of each other…until today when the place I was dog sitting at had a AC pipe burst, soaking the upstairs bedroom. Now the condo I’m at is (for the most part) stripped down to its core, the dogs I was watching have been relocated and I am left quarantined in a room with the two cats I was also watching. You have just read why I will be doing the AAA preview tomorrow in the morning instead of tonight. Luckily the cats are super cute (I have nicknamed them Juvy and Ishii because why not?), my Playstation and laptop are functional and everyone working on the wreckage has gone home for the night. And that’s the story of how the CMLL Live Review is still happening! Let’s get to it sports fans; Okada awaits.

For the first two falls of this match I was regretting not listening to the Nick and Norah’s Infinite Playlist soundtrack while watching this show. Not that this match was bad; it just needed something to spice it up really badly. Luckily the conclusion of the match did just that. Whereas the first 2/3rd’s of this match felt like solid going through the motions work, the climax of this match was really strong. Oro Jr. was trying some new cool things, Disturbio was at the top of his game and Yago was dropping people knee first on the stage because why not? Only poor Super Astro Jr. had little to do during this time (except getting pinned), but he was frankly the brightest spot of the first two falls so we’ll cut him a break. I don’t know if the conclusion was enough to make the match good, but it certainly took it from “respectable if forgettable” to “huh, that was interesting!” And that’s always better when compared to the other option.

We should’ve known the moment CMLL rolled out Esfinge and Okumura for the “hot start” that this match was going to be a downer. And my Grodd was it; I haven’t seen something this depressing since Scott Pilgrim tried to tell Ramona he was in love with her and this happened instead.

You would’ve thought, with a big star like Okada in the house and new eyeballs on CMLL, that all six luchadores here would be gunning for something good. Instead it felt like only Junior, Rey Cometa and Dragón Rojo were trying to make an impression. And even then Rojo and Junior never really ventured from the usual (they just did it really well), while Cometa got two showy moments (a 450 Splash and a perfectly placed dropkick in a tight space) before disappearing into the never. Throw in the abrupt ending to end all abrupt endings and this match left me disappointed. Hopefully not a bad sign going forward!

On the one hand, this felt substantially better than the last match. On the other hand…

I don’t know. There were some parts I really liked, mostly involving Big Euf and Gran Guerrero doing some really cool shit like Double Military Press slamming Kráneo from off the top rope. After that though it just kind of felt by the numbers. It doesn’t help that both Atlantis and Rey Bucanero can only do so much no matter what their effort, and they were pretty underwhelming throughout this match. Ditto for Guerrero Maya, who like Rey Cometa seemed to get nothing thrown his way during this match, which is a shame because he was probably the second best luchadore in this match after Euforia. Do I really have to keep going on about this match? It was there, Big Euf and Gran Guerrero were cool, everything else whelmed me to my very core.

THERE IS LIFE! Just when I was beginning to even doubt whether this match could deliver, Forastero and Audaz came along and exceeded expectations. I was a little worried at the start when Audaz had a few minor missteps, but he quickly settled into a groove and the match just took off from there. And let the record show it wasn’t just Audaz here. He was sensational no doubt and while I’m still not convinced he’s shown us everything he’s got this was (in my view) the best work he’s done in solo action yet for CMLL. Yes, even better than the Tritón match! But Forastero was no supporting player; he was right there with Audaz the whole time, showing off his basing skills and then towards the end proving he could fly just as well as Audaz with an unbelievable double jump senton. I was already convinced Forastero was good but this should solidify it in everyone who had doubts, and he was so good I don’t think anyone will be that bothered he won over Audaz. Just great stuff all around. If this isn’t the best match of the night, it means Okada went full G1 in the next match. Speaking of, it’s time!

Guess what sports fans; The Rainmaker went full G1! I was convinced this was going to be a match where he took it easy, the other five guys took it easy and this wound up being a fun but not especially memorable trios match. WRONG! This was not only better than the excellent Lightning Match before it but it was a legit great match with everyone going all out. Or in Diamante Azul’s case, a little too all out. He was like a zombie hopped up on Max Ranger during this match (and post match), and I can’t blame him because it’s not every day you’re in there with gorram Kazuchika Okada!

So yes; this ruled. Like the Lightning Match there were a few moments early where everyone was trying to gain their bearings and get into the flow. By the time the second fall had rolled around everyone was on the same page and at that point the match was firing on all cylinders. Último Guerrero and Negro Casas were as wonderful as ever, and Casas should be credited for carrying a good chunk of the match and getting a ton out of Azul. Speaking of Azul, his laughable attempt to get a feud with Okada after the match will be what everyone remembers of his performance, but he was really strong overall and held his own with Casas and Okada (as he should; they’re both excellent). Valiente was very much the sixth wheel but he impressed in his brief moments. Mistico was as impressive as I’ve ever seen him, showing great confidence and better chemistry with Okada. Their sequences sizzled whenever they were paired together. And as I already pointed out Okada was tremendous. It won’t be remembered as his best work but he gave a great effort, sold his ass off for all three technicos and looked devastating on offense. He also got Mistico over in a big match, in case you wanted more proof Okada is the greatest. It was exactly what I wanted from the best wrestler in the world and you hope against all hope there will be more times Okada journeys to Arena Mexico. If not, at least we can say we saw him team with the UG and Negro Casas in a pretty damn good match. What fun this was!

Oh was there controversy from this bad boy. Let’s start with the meat of the match which was, surprisingly, pretty decent! I had no expectations for the match but overall I thought they put together a fun three fall match that (Bestia del Ring stupidity aside) that was well paced, didn’t rely too much on Ingobernables brawling and never felt boring. I would’ve had no problem saying the match was good either; unfortunately the ending, which featured several fouls and one fake foul, was a little too goofy for my taste and left me a bit cold. Then again that also could’ve been the post match that did that, considering it presented numerous options that had me nearly rolling my eyes out of their sockets.

Here’s the general gist sports fans; CMLL very much set up the possibility of either Volador vs. Rush, Cavernario vs. Matt Taven, a tag match between those four or a cage match featuring those four and LA Park (who by the way is booked for Super Viernes next week, the night before he headlines Triplemania) via challenges and brawling. None of those options are that appealing compared to what everyone wants (LA Park vs. Rush) and thus it couldn’t help but all feel flat for us watching at home (the Arena Mexico crowd didn’t exactly seem that into the idea either). I honestly don’t know what to say anymore after all this. Any other year a couple of those options would be fine and I can definitely see myself enjoying Volador vs. Rush (which has a decent amount of heat itself) or Cavernario-Taven in a big singles match. But good Grodd, after all the work CMLL did to build up LA Park vs. Rush…going that route feels like a letdown, especially to someone like myself who always knew CMLL could screw it up but remained confident they wouldn’t. We’ll see come Wednesday but for now, it looks like they have screwed it up and will probably do so in the worst possible fashion (the cage match. LA Park being on the show next week, a day before a huge show, indicates CMLL wants him in the Aniversario main event, just not in the way we all want). As such this post match came off cold, the ending of the match came off cold and as such the match itself, despite being pretty decent all around, feels cold after all of it. At least it was fun up until the end and I’m much happier there was something good about the match as opposed to it being the usual Ingobernables brawl followed by a shit ending. Can you imagine if we got that to go along with the post match stuff? Some peeps would be on suicide watch!

That’s CMLL sports fans. I’d say a pretty mixed show overall; the opener was solid, matches 2 and 3 were lame, the Lightning Match and the Okada match ruled and the main event was looking good until it stopped. Ultimately this show likely won’t be remembered fondly if it leads to anything other than LA Park vs. Rush at the Aniversario and I will be right there with people feeling disappointed. But overall I can’t hate on this show this much when I got to watch Kazuchika Okada team with Último Guerrero and Negro Casas in a really fun trios match. That alone made this show worth checking out an on some level covers up the bad taste of some of the other stuff.

And with that I’m off! I’ll see you tomorrow sports fans for AAA’s show. Till then, TEKKEN OKADA! 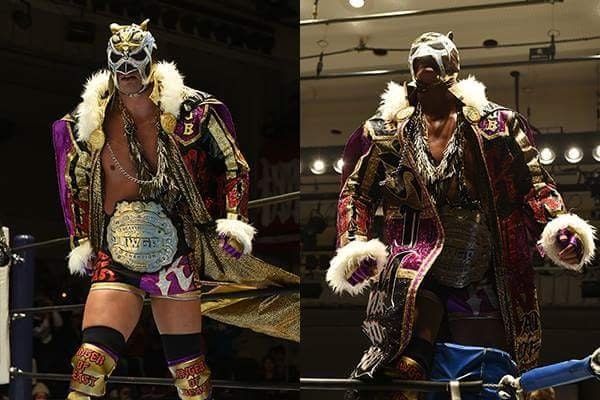