When last night’s miserable AAA show concluded by making me feel I had wasted three hours of my life, I shuffled off to sleep thinking “well at least FantasticaMania will be better tomorrow morning.” I was right…but not by much. This morning’s FantasticaMania was always going to be the weakest of the Korakuen Hall shows but hot damn it was even weaker than I expected. Of the seven matches, only three of them were worth “going out of your way to see” and even then only one of those three really left the impression. Everything else was just boring or uninspired, to the point that between this show and the AAA show I actively started to wonder what the hell I was doing with my life. And now I will continue to wonder that as I pump out this FantasticaMania review. Wish me luck. Oh, and VOTE!

It took until the second to last day of the damn tour but finally…FINALLY, New Japan let a luchador do something in the opener other than be involved in the finish. And it was with Flyer! I know he had the big main event match a few days ago but would you have really expected Flyer to mix it up with the IWGP Junior Heavyweight Champion of all people? It didn’t go perfectly (Flyer nearly landed on his head on a rana attempt and there were crossed signals on an Irish Whip spot a few minutes later) but it went better than I expected after Flyer had a rough Friday morning. You would hope getting sequences with Ishimori (hell this whole tour) will give him more confidence in his ability going forward. The other plus was Flyer getting more time freshened things up a bit for the other three, especially Ishimori. It wasn’t enough to make it a good match, but seeing him work with someone that wasn’t Taguchi for a few minutes couldn’t help but be an improvement over three shows of him and Gedo beating up Taguchi while the luchadores twiddled their thumbs on the apron.

IT! HAS! HAPPENED! If I hadn’t seen it with my own eyes I don’t know if I would’ve believed it sports fans; after a long year of losing his title, his mask and every single match between the two along the way, Ángel de Oro was finally able to kick out of Cuatrero’s big moves, escape his Reverse Bearhug submission and lock in his own (forget the lucha name; it will forever be the Billy Goat’s Curse to me) to get the victory. You are reading correctly; Ángel de Oro has beaten Cuatrero!

Now if only he can beat him in a singles match amirite?! Frankly I think it’s pretty clear by now New Japan should’ve booked that singles match the same way they did Niebla Roja vs. Gran Guerrero last year. Granted they booked Oro vs. Cuatrero last year but that was before the mask match and before both guys had really gelled; they are the height of their chemistry now and it was on display even as they were splitting time with Titán and Templario in this tag match. Cuatrero was so impressive in this match from a little things perspective. I can’t recall him doing anything big but he was always in position, always on time, always doing the stuff no one remembers to keep things sailing. That’s the key to a great worker and Cuatrero has transformed into a great worker. So has Oro, who especially seems to hit an extra gear in Japan. The energy and chemistry between them was just fantastic and it’s just a shame the peak of it could only happen in this tag match instead of a singles bout. But then again, that would’ve left Templario and Titán out in the cold and both guys were really strong here themselves. Titán has been a new man ever since the Korakuen shows began (mostly because he’s now allowed to do stuff) and Templario finally had the great performance he’s been lacking since FantasticaMania began. I’m still not sure he’s reached his peak but he was the most comfortable he’s been on the tour today and looked really impressive when he and Titán were trading big moves. Between that and the magic in Oro and Cuatrero’s work, this was a really strong undercard match that I wouldn’t stop you from calling great. At worst it was very good.

…I’m not sure what there is to say about this match sports fans. Well other than the fact that it was the most lifeless, boring bout on the whole tour. I never thought I’d say that about a match featuring Naito, Shingo Takagi and Roppongi 3K and yet here we are. Then again it’s not that surprising; aside from the usual great sequences from Shingo and Raijin (aka SHO for all none of you not getting the joke) this was exactly the same match we’ve seen from these sides throughout the tour and the returns have been less impressive each time. With Naito and BUSHI going through the motions, Fujin doing very little and Henare just not being established the match couldn’t help but feel like a colossal drag. I’m pretty sure they’re doing another variation of this match tomorrow and I may just skip reviewing it if they do. Nothing on AAA last night bored me as much as this, and that AAA show was like getting your wisdom teeth removed while watching the whole process.

On the one hand, this was a very ordinary match. On the other hand, it had a Jushin Thunder Liger vs. Mima Shimoda sequence! Say what you will sports fans but it’s not every day you get to see a 1990’s New Japan Junior Heavyweight legend collide with an All Japan Women’s legend. Unfortunately the only other major highlight from this match was Forastero slipping on the ropes during a double team spot, a slip up rarer than finding a Mew in Pokémon’s Red or Blue. Everything else was generally by the numbers; it wasn’t bad by any stretch of the imagination but it’s nothing you’ll remember by this time tomorrow. Atlantis Jr. and Okumura did at least look solid together, which gives me hope for Atlantis Jr.’s first big match tomorrow.

I’m not sure I’ve ever seen a match quite like this one sports fans. It went about fifteen minutes by my estimation, with 14:30 of those 15 being really good while a 30 second window, where Carístico’s mask was accidentally pulled off and everyone frantically worked to cover it up, being hysterically bad. It reminded me of the time I first saw The Amazing Spider-Man. That’s a great movie almost all the way through, except for that one scene with Peter Parker and Gwen Stacey where the movie suddenly turns into The Room. There’s naturally no gif or picture of this scene so I’ll let Lince Dorado act it out in meme form instead. 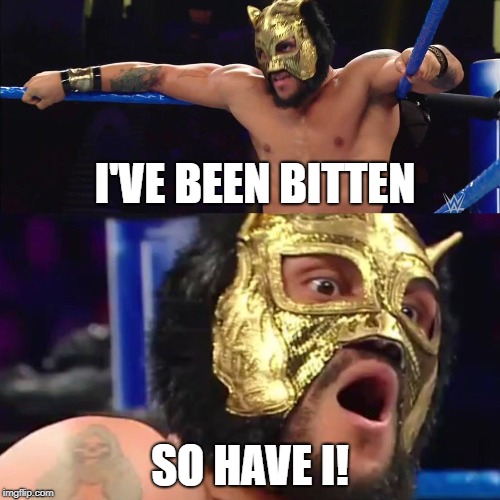 The point is, that Carístico unmasking moment was comically bad, and the way everyone tried to hide his unmasking while referee Marty Asami did his best “I DIDN’T HEART IT, I DIDN’T SEE IT!” impression pretty much signals it wasn’t a planned spot. Even worse I’m not sure where they were going with the spot either; just a weird sequence all around where the only accomplishment was making sure Flyer didn’t go home with biggest botch. He can rest easy now. It was even weirder when you consider how good the rest of the match was. There was a long rudo beat down sequence that I felt was unnecessary but otherwise this was exactly what you wanted; nonstop movement, a lot of great dives from all six luchadores and a whole lot of fun. Audaz in particular looked right at home with the bigger names and the Carístico unmasking will do little to change the fact that New Japan should be bringing Audaz back as frequently as possible. Overall I thought it was a very good match with one really bad moment, which was unfortunately enough to keep this from being what I thought it would be going in. And look at Carístico submitting Volador. The only way that finish could’ve telegraphed Volador winning tomorrow even more is if he had “I’m Winning Tomorrow” sowed to the front of his chest.

Here’s the good news sports fans; Terrible got himself a singles match on FantasticaMania, didn’t shit the bed in it and won the match against a New Japan legend. That’s great! Now if only the match had been. It wasn’t a bad match by any stretch of the imagination, though I’m sure some will label it as such because the Korakuen Hall crowd couldn’t have been any quieter. Both guys worked hard, nothing was sloppy; it was a fine wrestling match. But that’s all it was. There was clearly something missing from this match to take it to the next level and unfortunately Terrible and Kojima just never found it together. In many ways it was like the Rush-Kojima match from last year, only Rush is more charismatic than Terrible and was at least able to get the crowd to react to him. That just didn’t happen here. A fine effort and Terrible can at least tell his grandchildren he won a New Japan singles match years from now, but don’t expect it to open any more doors for him.

I don’t know if the terrible AAA show from last night just has me in a bad mood or if I’m just all lucha’d out at this point but man; this match didn’t really do a whole lot for me. Hell this whole show didn’t do a whole lot for me. Then again, judging from the Korakuen Hall crowd reaction to this match perhaps I am not the only one. I don’t know sports fans; there were several moments in this match that I thought were quite good and Mistico continued to look really impressive. But there were long stretches were I just felt bored out of my mind and couldn’t get into a damn thing. That could be because only Mistico and Gran Guerrero were really going full speed though; the UG and Dragón Lee weren’t bad but they were definitely doing their routine more than they were going all out. In the end it just didn’t click for me, much like the finals to last year’s CMLL Family Tag Tournament didn’t. At least this continued the always reliable lucha trend of the main event summing up the show, as just like this card it was alright but underwhelming. Who would’ve thought Ángel de Oro & Titán vs. Cuatrero & Templario would’ve been the best match?

I’m done sports fans. Normally I would do a preview of tomorrow’s FantasticaMania show but at this point I’m so drained by all this mediocre lucha over the past day that I have no desire to. And there’s no way I’m doing any sort of column if my heart isn’t in it, so instead just look for a FantasticaMania review tomorrow. Till then. 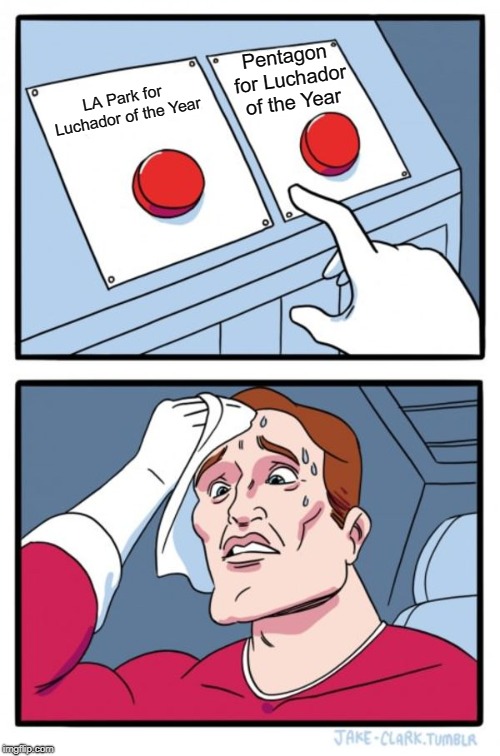