I woke up this morning sports fans and said to myself, “man, it’s going to be nice to have a day without wrestling.” After all I spent all weekend watching shows from Expo Lucha (some that I’ll need to see again to review for this site later in the week) and then watching All In last night, a show that will go down as the When Worlds Collide of this generation. A day off would’ve been nice…I say would’ve because I soon after remembered that AAA was streaming a show tonight from Monterrey! And that’s the story of how I ended up watching a reviewing one more show this weekend. Let the record show that this AAA show was not as good as All In, Triplemania last week or the Future Legend show at Expo Lucha on Friday, though it did contain one hell of an opener and several other entertaining matches along the way. Basically it kept up the trend of AAA having decent shows; it just wasn’t a blow way show. But don’t just take my word for it…dammit I fell into that trap again. Let’s forget this ever happened and just get to the review.

To think that this match was originally supposed to be a trios match featuring Arkángel Divino and Hijo del Vikingo. Not only were they not there but these four did not need them!

Holy shit, this might’ve been better than anything other than Kenny Omega vs. Pentagon on All In last night! It’s almost like this was the type of craziness the main event would’ve been if the Bucks, Ibushi, Mysterio, Fenix and Bandido were allowed to completely nuts. Just pure insanity from the word go, with the pace never letting up, hardly a slipup and all four guys looking like superstars. Drastik Boy was awesome. Arez, who has quietly been a lower card superstar since AAA brought him in, was otherworldly with some of the stuff he did. Belial was the least flashy of the four but he made up for it with some cool basing and a few great submission combos. And Último Maldito proved he’s probably the most ready between him and his brother (Divino) in being able to adapt to other opponents with what I thought was a performance just as good as the infamous Tijuana match. That aforementioned classic has become the measuring stick for AAA openers this year and, much like the Triplemania pre-show opener, I think this match was knocking on the door. Stupendous fun.

I guess this was Faby’s revenge match? If so, why didn’t they just book the Triplemania match like this?! There were still some Hijo del Tirantes shenanigans and Taurus got involved again, but both were kept in the background to allow Faby and Shani to wrestle. The result was a match that was better than Triplemania, if not on the same level as the Guerra de Titanes match back in January. It was just missing the heat of those two matches I thought; otherwise I thought both Faby and Shani worked very hard, the wrestling was mostly really strong, Shani getting the better of Taurus for once was a nice change of pace and things just overall flowed better than at Triplemania. If they had put this type of match on Triplemania with Shani overcoming instead of losing then it would’ve been special. Instead they did it here and it was instead just pretty good.

At least I think he is? I’m gonna be honest sports fans; I have no idea what happened here. Wagner came out as the best dressed man in the room, cut a promo, got interrupted by Jeff Jarrett and El Hijo del Fantasma (looking very Roman Reigns like unmasked) and then traded words with both before they left. Whether this means we’re getting a Wagner-Jarrett match (ugh), a Wagner-Fantasma match (cool) or something else entirely beats me. All I know is that this existed and other than Wagner’s sheer force of charisma it was uneventful.

Let’s start with the flaws sports fans. Excuse me, I mean flaw; Hijo de LA Park turned rudo at the end of the match to help Poder del Norte win, for no other reason other than he just didn’t like his partners (which was hinted at the start of the match). Other than that this was some pretty sublime lucha. If you enjoy Poder del Norte then you’ll love this match. They were on fire throughout with some punishing offense, including one chair shot that I thought might’ve beheaded Hijo del Vikingo. Luckily he kept his head and turned into the best luchador in the world in this bout’s second act, thrilling people with tornillos and super cool sequences. Meanwhile Park, prior to his turn, was a lot of fun and Joe Lider continues to be a guy who inexplicably finds himself in good matches. It’s the biggest mystery of 2018, right behind why Kazuchika Okada chose balloons as his mental break down object of choice. At least he got to use his staple gun in between all the action. So yeah; really fun match other than the turn at the end.

It was going so well sports fans. Aerostar had just added another death defying dive into the seats to his resume, Drago and Teddy Hart were having a pretty neat sequence in the ring…and then Escorpión and Texano came in, laid Teddy out and it was over!

Talk about infinite sadness sports fans. I was looking forward to this match and it was living up to the hype up until AAA cut it a tad too short. In the end I guess AAA wanted to spend more time building to Escorpión/Texano vs. Mamba/Máximo at a future event, which is fine except it meant less time for all the people I came to see! Fortunately Aerostar and Drago did get quite a bit to do, The Hart Foundation 2.0 was a lot of fun and the Escorpión/Texano v. Mamba/Máximo stuff worked fine because the tag champs are bad asses and Mamba and Máximo both tried really hard despite some comedic moments. There just should’ve been more. Come on AAA; you don’t book a four way tag match and then only give them ten minutes. I need more Aerostar. I NEED MORE TEDDY JACK!

I must be in a good mood tonight because this wasn’t the worst match I’ve ever seen in my life. I’m not joking; there have been FAR worse matches in AAA this year, particularly a few bouts in March where I was pretty sure AAA would never be good again. That doesn’t mean this was anywhere close to a good match but…I don’t know. All I know is I didn’t hate it. I thought Taurus and Murder Clown both tried really hard and looked good in the one sequence they got together, Killer Kross did what he could (which was very little because he was stuck working with Imposter Parka most of the time), Dr. Wagner bled buckets for this match and Imposter Parka and Jarrett…were also there. What a pity that Wagner had to go so far in this match to get over a future match with a guy who couldn’t wear his fur coat. Take away that though and I just can’t sit here and say I hated this match. It was below average and not something I need to see again, but anyone saying this match was garbage and beyond reproach is forgetting certain matches that happened in AAA this year. This was a waste of time, not a disaster. 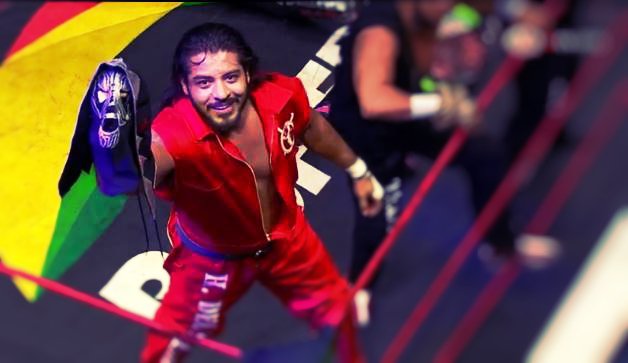 This picture makes it look like Fantasma is wearing red. Red is the New Fantasma!

To the match to the match! If you’ve enjoyed any of the brawls these three have had since LA Park came back to AAA then you’ll have enjoyed this one. I sure did, at least until the usual foul ending. The twist tonight was that Park played face in peril during the early stages of the match while Fantasma and Psycho beat the shit out of him. That’s right; Psycho went full rudo and quite frankly it was glorious to see. I can’t say for sure but I think it was a case of all three guys reading the pro-Park crowd going in this direction, and ultimately it worked for the better, especially when Park finally started to make his comeback. It didn’t have some of the wow spots some of the other matches have had but they told a good story, both Park and Psycho’s suicide dives were excellent and the match was enjoyable until, once again, AAA decided to go with the foul finish. One of these days AAA will end a show without that and Lucha Central will have to find someone else to do these reviews as I will die from the shock of it all. At least it won’t be today. A fun little main event, and if you’re a fan of Los Mercenarios then you’ll really like that this show ended with Fantasma celebrating with teammates Rey Escorpión and Texano. Big night for them!

That’ll do sports fans. I’m off to watch a science fiction movie. Till next time!

When you get name dropped during All In