AAA on Twitch: Mindless Self Indulgence

I would like to come up with some fancy, powerful words to describe this AAA show for you sports fans. In the end, all I can say is the tale I’m about to tell you features one of the most awe inspiring, toe curling, delirium inducing examples of incompetence ever seen in a wrestling ring. My only regret is you have to wade your way through two good matches and some forgettable nonsense to get there. So let’s not waste time. Prepare yourselves, and be sure the song “Never Wanted to Dance” by the name sake of this column is ringing in your ears when we get to the end. 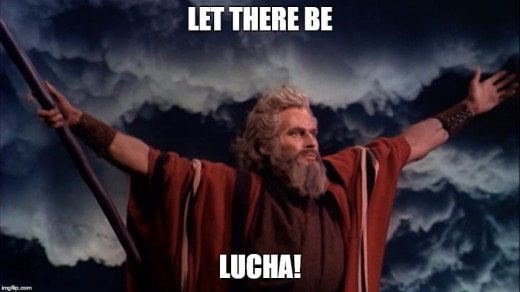 To quote my brother describing Kong: Skull Island (aka Apocalypse Kong), this was dank. May I never use that word again. But yes, I enjoyed this match thoroughly. I wouldn’t go as far to say it was as smooth or as fun as yesterday’s H2L opener, but then again what is? The point is this match was exceptionally paced, super fun and loaded with cool spots that, while not always working perfectly, have to be lauded for the effort and intent. Frankly the only guy I thought who wasn’t up to par was Bronco Gonzalez, who just seemed to be a little off. Everyone else was good to great. Fetiche acquitted himself well as a base, Dragón Solar and Pardux both looked far more impressive this go around then their Triplemania match and I popped for pretty much everything involving Dinastia or Mini Histeria. Especially Dinastia; I know this is going to sound like something you’ve heard before, but hot damn AAA should really use that guy. He exploded off the screen in this match and I loved him finishing off Mini Histeria off with that spike rana. A great end to a very enjoyable opener. Naturally it was all downhill from here because hey, it’s AAA, but at least they gave us this to hold onto.

This was over 9,000 times better than I expected this match to be. Of course so was the Majin Bu Saga in Dragon Ball Z and that was still just kind of lame at the end of the day. The positives were that the crowd was into it, all four performers were trying and I actually did see some potential in Ashley and Estrella Divina. Both need more oomph and speed to get to the next level, but they’re solid overall and with the right opponents could be something. The problem is Mamba and especially Pimpi aren’t those opponents. You could at least say Mamba is capable of a few things as seen here, but Pimpi at this point looks barely capable of doing arm drags, the only spot Pimpi knows how to pull off! As such, the match was kind of a slog, made even worse by it going long. I won’t take away that the crowd enjoyed it (especially the Mamba/Pimpi team) and AAA thankfully did continue the Ashley/Divina issues by having Divina leave Ashley after the latter lost the match. Alas, it wasn’t enough to make this something I’d recommend to loved ones. And to think; I have to watch this two more times over the course of two more AAA shows in the next week.

I…I’m honestly still not sure what happened here. I seem to recall Monster and Murder Clown dominated in boring fashion, then The Artist Formerly Known as Ripper brought in what I thought was a toy snake to freak out Murder Clown, only it was actually a real snake, and then five seconds later Psicosis won the match with a Top Rope Senton on Monster. Maybe I’m just misremembering though; a match can’t be that ridiculous can it? I guess it can. And with that, I literally have nothing left to say. This was a match, and a match I hope to never see again. Can we please move on now?

Maybe I’m officially losing my mind, but this match pretty much summed up every AAA show of 2018. It actually started off better than I thought, for a moment looked like it may be good…then Imposter La Parka came out and everything went to shit. In fairness, I didn’t even think the match would get to the point where it might’ve been good so I guess that’s a positive. Joe Lider might be hitting more buffets than Lucha Underground’s Bengala, but he and Augila were both trying and in the middle of the match were even connecting with some cool double teams. If that had kept going, coupled with Escoria continuing to look like a guy who is one ditching of Cuervo away from breaking out, I think we may have had something. Instead we had to have the new La Parka Negra run out for interference, followed by Imposter Parka (which forced everyone to sell for him) and we ended up with the lamest finish since the last AAA finish. You know how you could make this up to us AAA? Put Escoria with a new, far more interesting partner, or give him a singles push. He continues to be a bright spot every time I see him and he deserves better, which of course means he’ll be stuck with Cuervo till he’s fifty and a broken down piece of meat.

This match feels like it happened a lifetime and fifteen shows ago. It may as well have because this was, outside of the opener, the only thing on the show worth a damn. You can thank AAA changing this from a three way tag match into a trios match, thus adding Super Fly, Tito Santana and yes, the ace himself Psycho Clown to the proceedings. I don’t know if it was a great match that resulted from those changes, but it certainly was a good match; the Brazos started things off hot with a triple dive sequence, we then got several minutes of each rudo team building heat in their own special ways before Psycho and the gang made their comeback, all out chaos ensued and Máximo brought it home with a kiss or three. Overall it was a fun time, largely thanks to the effort of all nine guys and the crowd being nuclear hot because Psycho is so over he’s lapped Roman Reigns about thirty times by now in that department. He’s so over there were kids crying at him taking a routine beat down; that’s power right there. I’d be willing to bet these guys could do better on a bigger show with more steam behind the match, but for what we got I was very entertained, especially compared to the rest of the show. Although, I can’t say I was as entertained as I was for what followed it…

Holy jumpin’; this match was such a masterpiece of suck that I just quoted the atrocity known as Darren Pang. Not only did it live up to how bad I thought it would be, it was somehow even worse! For starters, the match went, and I’m not making this up, 29:54. TWENTY NINE MINUTES AND FIFTY FOUR SECONDS! That’s longer than Angel de Oro vs. Cuatrero from last night’s H2L show and, get ready to rage quit, vastly longer than what Texano and El Hijo del Fantasma got at Rey de Reyes. If I were those two right now, I’d be reacting along these lines.

So yeah; someone in AAA actually thought it was a good idea to give the Imposter La Parka and Dave the Clown, two guys who can’t wrestle for a minute and a half, a half an hour to work with. That would be like David Geffen telling Kurt Cobain the next Nirvana album needed a fifteen minute epic with a ten minute Cobain guitar solo. And it only gets funnier from there. Naturally Parka and Dave were abysmal during this half hour of fecal matter, delivering some of the worst segments in the history of wrestling. Hijo del Wagner, clearly recognizing a no win situation, wrestled this match like he’d rather be getting sodomized with a Kit Kat bar. Pagano, clearly not recognizing a no win situation, tried to make things work with a few dives, a few crowd brawls and a powerbomb through two chairs; of course his noble effort only made it even more hilarious how catastrophic this match was. Hijo del Tirantes managed to be a pro rudo ref for the first 29:51 before turning on Dave and Wagner in the final three seconds because of course he did. Rey Escorpión and Hijo del Vikingo both interfered in the latter stages in order for Vikingo to hit a wicked tornillo and to set them up in a feud, which might’ve been the whole point of this mess! And through it all, the Cuernavaca crowd remained so invested in the proceedings that I actually caught ten year old kids FLIPPING THE BIRD TO THE RUDOS! Mother of puss bucket, I haven’t seen a kid this upset since I rage quitted after Ash was brought back to life by Pikachu’s gorram tears at the end of Pokemon: The Movie. Like come on people; I can accept a world of weird ass animals that can only repeat their name, but I draw the line at those same animals resurrecting stone people with their tears.

To sum it all up, this was one of the worst matches I’ve ever seen, one of the funniest matches I’ve ever seen and I both loved and hated all 29:54 of it. It was an abomination, it was unintentional comedy at the highest order, it was nonsensical, it was implausible and it was yet another piece of damning evidence that AAA has been struck with a case of mindless self indulgence. I have seen my fair share of shit in wrestling over the years, from the Hulk Hogan-Giant Monster Truck match (frankly, all of Hogan’s 1995 work) to the John Cena “Embrace the Hate” angle to Volador being forced to work Yoshitatsu just a year ago. This will go right down alongside those matches/moments as one of the worst things I’ve seen in the history of wrestling. I’m both honored to have experienced it live and offended that I ended up watching this instead of attending Ultima Lucha Cuatro. And to think; there’s two more AAA shows on the docket in the next week featuring the continuation of this Parka-Dave the Clown stupidity. If they continue to put efforts like this, I may just have to retire from writing and start the lucha libre equivalent of Mystery Science Theater 3000 in order to show these turds to the world. In fact, I may pitch that anyway! As Kevin Bacon says in JFK, I ain’t got nothing but time.

And that children is how a column becomes…a column. Yup, my brain is fried. I will now disappear into the night to rethink every decision that has led me to this point, and depending on the outcome I may not be back tomorrow to review CMLL Puebla. Alright I definitely will but still…I might not be! Till then, THIS!!!! 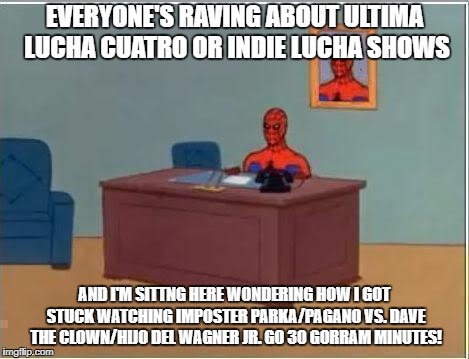