I know I know; we’re a little behind here at Lucha Central as AAA’s show has already started. In our defense, AAA actually started early for once. And by early, I mean a half an hour before the show was supposed to begin. We now live in a world where AAA not only started a show on time but actually a bit early. What a world. But enough of that; it’s Live Review time!

The streak…continues! I believed it would all along. No seriously; all I said was the second match would be better. Never did I say this match wouldn’t be awesome! And it was. As with all AAA openers these days the pace was sublime, everything was super smooth outside of one Vanilla arm drag attempt and some of the stuff these six did was off the charts. I still think Vanilla and Star Fire were a bit miscast but they worked around it well, with Vanilla doing a lot more in this match than she did a week ago while Stare Fire still brought the energy big time. Everyone else was on the ball (though it still feels Maravilla and Keyra aren’t showing the full arsenal), with the best part of the match being arguably at the end when Astrolux pinned Latigo following an absolutely sick pop up West Coast Pop. Hard to believe that’ll probably wind up being the fifth bet thing on this show! What a sweet way to start things off.

Well…looks like we have our answer as to why Fantasma being in the semi-main makes sense! Somewhere along the way King Cuerno’s other half decided to join up with MAD, which we learned when he came out to interrupt what looked to be a very boring Imposter La Parka speech with Juvy, Jack Evans and Teddy Hart. He ran down Parka brilliantly, which didn’t matter in the end because ultimately Parka attacked Juvy before he could get any lines off, followed by Psycho Clown making the save when all four ganged up on the Imposter. I guess that’s all to set up Parka being in the main event later. Joy. Everything he did was lame, everything MAD did was cool and everything Psycho did was decent, although kind of lame when you consider it was MAD getting beaten down again. So I guess you could say it was a mixed segment!

You know…I’m not sure this match went the way everyone wanted it to, both from a quality and result standpoint. In fact I wouldn’t be surprised if some people looked at this match the way Zorg looked at everything that went on in The Fifth Element.

Look this was still a really strong match overall. Poder del Norte looked as destructive a unit as ever and some of the stuff Aramis, Bandido and Flamita did was absolutely electrifying. The problem people are going to have is there didn’t seem to be nearly enough of it, with Brava, Cota and Santana mostly controlling the action while the technicos had their moments in the middle. That’s fine; Poder del Norte can handle that and all. But with talent like Bandido, Flamita and Aramis you’re probably expecting more high flying and overall there just wasn’t as much as expected. I found it entertaining overall and anyone who says it was outright bad had their expectations way too high, but I don’t think anyone will claim this was the match they were expecting, from the lack of all out high flying down to the surprise victory for Poder del Norte.

What a world we live in where AAA sought fit to give the last match only six minutes or so, while giving this match what felt like fifteen minutes. That would’ve been okay if anything had happened in this match…except nothing did until the final minute and a half when Faby and Shani traded some nice near fall attempts. Otherwise it was beat down after beat down and Pimip arm drag after Pimpi arm drag, with Australian Suicide and Parka Negra existing so little that AAA could’ve plugged anyone else in and it wouldn’t have mattered. It wasn’t the worst match I’ve seen recently but my goodness this couldn’t have gotten more pointless if it changed its name to Jumper. At least the Faby-Shani stuff looked good and AAA continued the trend of having Taurus attack Shani after the match I suppose. Sooner or later Shani has to find someone to combat the bull right?

How could one not love this match? Not only did it have the return of Puma King after his impressive debut for AAA last week, not only did his return mean Teddy Hart was teaming with a dude who’s gimmick is that of a cat, this match had him beating Máximo and La Máscara to give his team the victory. Did that ever happen in CMLL? I think not! Now if only Puma was in AAA for this reason. 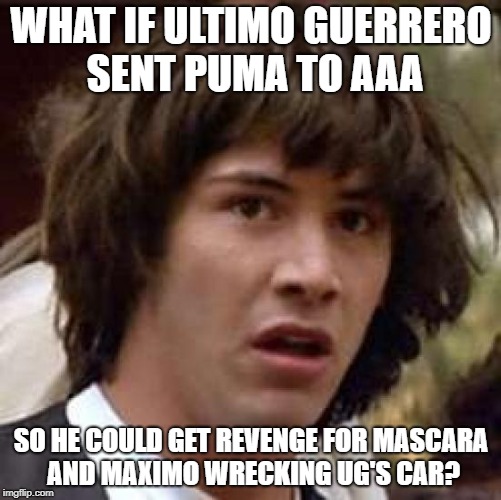 Back to the match! It was super good and definitely the best match on the show to this point. The only flaw I found was a few slow points and one section where Sammy Guevara couldn’t send Teddy Hart over the top rope via clothesline. Otherwise I enjoyed the hell out of it. Máximo looked the best he’s looked since coming to AAA, Sammy Guevara was hot fire all the way through and even La Máscara wasn’t that bad. It helps greatly that the rudo team was just what the doctor ordered for them to play off of, and the combo of Jack, Teddy and Puma not only made those guys look great offensively but delivered the goods themselves. Did you see some of those double teams Jack and Teddy were dishing out? This is why The Hart Foundation 2.0 reunion is what we needed in 2018! Throw in the continued build up of the Máscara-Máximo breakup at the end of the match (which I thought AAA handled well) and the tease of an eventual Jack-Sammy battle and I was completely sold on this match. Job well done!

I was complaining about the third match getting the time Aramis/Bandido/Flamita vs. Poder del Norte should’ve gotten; turns out the better example was this match! Watching the highlights when it was over made it look pretty good overall but in reality this match was at least five minutes too long. It wasn’t bad by any stretch, with some of the double teams standing out and several good dives at the end by Chessman and Super Fly. There were just too many moments in the middle where everyone seemed to be wandering around aimlessly and some surprisingly clunky spots along the way. It can’t entirely be blamed on the talent because a) Los OGT’s are still new to the technico role and b) the rudos hadn’t really worked together before. Even still it led to a disjointed match overall with only a few highlights here and there, making it a better video package than an overall match.

I love it when main events like this one sum up the disappointment of the show they just headlined. And nothing sums up how lame this show was like Imposter La Parka making a comeback on Escorpión, Kross and Texano all by himself. Because not only must Parka be the worst luchador to walk this mortal coil, he has to be the biggest egomaniac at the same time as well. I never thought I’d see someone suck the life out of shit more than 1998 era Hollywood Hogan but this imposter makes that man look like Terry gorram Funk. 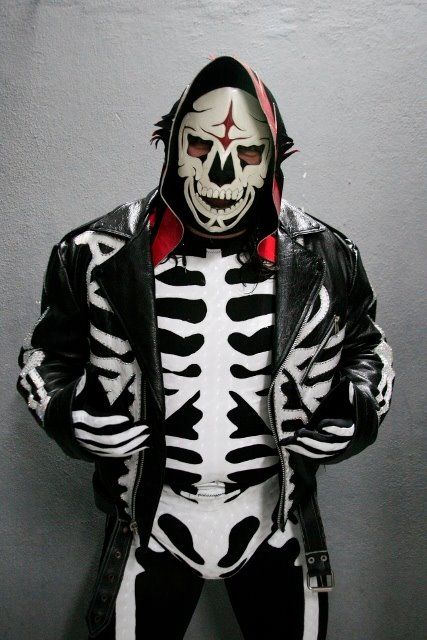 When you’re trying to be cool, but you fail as bad as you do at lucha libre

In fairness to the fake La Parka, he wasn’t the only reason this match mostly blew chunks. The way everything was booked, with prolonged beat downs from both sides that had little flow, run ins for the sake of run ins and nothing all that exciting happening, the match was likely doomed from the beginning. But good Grodd did Parka’s awfulness stick out when everyone else was giving it their all to try and salvage things. Pagano did his usual high effort, low ability performance right down to the table bump that actually went right for him this time, while Texano, Escorpión and Psycho all had brief flashes. Only Killer Kross was left behind and that was largely because he was stuck with Parka. It’s quite wild when it comes to Kross; I’ve yet to see him deliver anything “great” in AAA, but if you look at his history there’s never truly been an opportunity for him to actually try and stick out. This match was yet another example of that, and anything Kross did was (and would’ve been) forgotten once Jack Evans, Juvy, Fantasma and Murder Clown (yes, Murder Clown) ran in to either beat down Psycho or turn technico to help Psycho (yes, once again, Murder Clown). Do you see why we all thought this was weak? I guess AAA didn’t like that taste of a great main event they had last week because it was all about course correcting back to the soul sucking status quo tonight.

That was AAA in Ecatepec sports fans. Not counting that show where Pagano and Murder Clown had a match to forget, this was easily the weakest effort from the promotion since Konnan got the book back several months ago. There were still good matches; I enjoyed the opener, the second match and especially the Hart Foundation match, which turned out to be the best match (and the best paced match) of the night. Overall though it felt like everything that needed more time got short changed and everything that needed less time got an excess of it. And that’s before we get into all the bullshit of the main event. The good news is AAA has shown since April that they can do better and I expect they will starting Thursday. For tonight though, it was, I’m sorry to say, a stinker of a show overall.

And I’m out sports fans. See you tomorrow for the CMLL Tuesday preview. Till then, THIS!

CMLL Puebla Sucked and I Won’t Miss It