AAA’s Heroes Inmortales XII is in the books sports fans and, to quote the great Peter Griffin, it’s exactly what it looked like. Well for the most part at least. The matches we expected to be good were good. The matches people expected to suck, with one exception, really sucked. While I certainly don’t think it was the waste some people believed it to be, it definitely will not go down as one of AAA’s best shows of the year and in some ways is proof that AAA still has a lot of kinks to work out. Even still, the show had a lot of fun moments, did at least try to set up some future programs for down the road and, despite Konnan not being at this show, only featured one Vampiro appearance! So it was like one step forward and one step back…in other words AAA’s exactly where they were yesterday! And on that note, it’s time for a preview before I and the rest of New England are wiped off this world by a bunch of celebrating Red Sox fans.

What a pity this match took place on a night where the focus will be on Women’s Wrestling…just not this match because it didn’t take place under the WWE banner. I can’t speak for that show (I didn’t watch it) but I think this would’ve fit in there just fine. It was exactly what you wanted; well paced and hard hitting. There were a few iffy moments in the beginning and it wasn’t the break out Keyra performance I was expecting, but that’s mostly because Star Fire completely stole her thunder. She was outstanding this match and in a completely different way than usual, as Star Fire abandoned the high flying in order to go toe to toe with Faby in the hard hitting department. She more than held her own and the closing stretch of the match was quite good for it (I wasn’t even that upset Star Fire took the pin. She came out looking that good!). Throw in another impressive Scarlett Bordeaux performance and Keyra doing well (though again, not as good as expected) and this was another strong performance by the AAA luchadoras. Hopefully it can keep going now that Lady Shani, who came out to challenge Faby after the match, is back in the title picture. Based off their match earlier this year I’d say that’s a given. Based off the matches they’ve had since then…eh.

The Part Where Dr. Wagner Jr. Threw the American Flag on the Ground

And that’s just one nugget from this piece of unintentional comedic gold. First there was Jeff Jarrett coming out with El Hijo del Fantasma and Karen Jarrett (yes, Karen Jarrett), all so Jarrett could cut a promo while Fantasma translated. Then there was Karen being a better promo then Jeff (I shit you not!). Then there was Wagner coming out dressed like the new spokesperson for Burger King. Then there was the return of Scarlett Bordeaux to try and seduce Wagner. Silly girl; Wagner doesn’t get seduced, he does the seducing! Then there was a beat down by the rudos until Blue Demon Jr., turned technico again because of course, came out to make the save. I laughed, I laughed and then I laughed some more. It wasn’t what I’d call good but it was entertaining!

I went into this match excited about what Team Aerostar and Poder del Norte could do, but dubious that the match could be anything really good because of Mamba, Máximo and Pimpi. The first part played out as expected; the second part did not!

I wouldn’t go out of the way to call this match great, mostly because the stakes in the match were less than nonexistent. But my Grodd was it fun! Things were definitely helped by Angelikal, who got bumped out of the Copa Antonio Peña for this match (more on that shortly!) and came out roaring, hitting one of the best tornillos you’ll see all year. And it’s been one hell of a year for tornillos! Also helping was that everyone in the match, save the referee (who was quite frankly awful) performed at or above expectations. Poder del Norte were great as usual, and would be even better if AAA finally gave them some direction. Aerostar was phenomenal; did you see that arm drag he did early in the match? Even Fenix picked his jaw up off the floor after that. Drago was superb. And luckily for us Mamba, Máximo and Pimpi were all better than usual, perhaps motivated by not doing the same damn thing they’ve been doing for the past few months. If only this had been for the Trios Titles; the match may have had some weight to it. Alas it was still very fun for what it was, although I can’t say I’m excited about this Aerostar-Monster Clown feud AAA is building too. Alright let me rephrase; I’m excited for Aerostar getting the opportunity, I’m just not excited he’s feuding with the Fredo Corleone of Los Psycho Circus. Then again who is?

With the exception of poor Andrew Everett serving as a manager instead of a participant (he hurt himself in Tijuana over the weekend, thus explaining Laredo Kid taking his place), this match was exactly what you expected and wanted. Well at least it was for me; apparently we now live in a world where a bunch of wild, spectacular spots (including Double Superplexes, 450’s off the apron and a bunch of other stuff) is now just kinda cool? I don’t know; for me this worked big time, especially when we could’ve gotten Escorpión and Texano doing their usual shtick for fifteen minutes. Instead we got the two energized and focused, and they proceeded to have their best all around performance since Triplemania. Meanwhile DJZ and Laredo Kid looked like two luchadores who had been teaming for years and Bandido and Flamita were as terrific as expected. And you could argue that’s despite them not going full blast. I may have done a tag title change because we don’t know if Escorpión and Texano will be stuck with the Exoticos going forward or not (and this show, if nothing else, showed the feud isn’t working by how energized everyone involved in that feud looked out of it) but it’s not the end of the world. Overall I thought this was a great match, multi-man or not.

I guess we’ll start with the good news sports fans; this was far, FAR better than the disaster Copa Triplemania from last year. The bad news is this match still sucked, especially when it came down to Pagano and Fantasma. It makes sense why it did; those are the two biggest stars in the match after all. Those just aren’t the guys I would trust to do a “final two in the Royal Rumble” segment, and they showed why here by being so off that they looked like they were making things up on the fly. The only good part of the sequence was when Niño Hamburguesa, the second to last elimination, decked Fantasma with a chair, sending him to the floor and right into the arms of Escorpión and Texano (who had just wrecked Pagano a second ago). Great spot; naturally AAA neutered it a second later by having Pagano eliminate Fantasma out of nowhere. That was lame. The match leading up to it was fine, if uneventful, the pre-match stuff honoring Antonio Peña was cool and the post match, that was Cíclope and Miedo Extremo attack Pagano to continue their feud, was well done and probably should’ve happened during the match. It didn’t matter cause the end of that Copa was just…oh my. Even the finale of How I Met Your Mother didn’t produce as many eye rolls.

If the last match was a colossal disappointment, this match was the biggest miracle since I read positive reviews for Rise of the Planet of the Apes. Not only did this match not suck despite losing LA Park, this match was honest to Grodd decent and incredibly entertaining. And that was despite replacing Park with Monster Clown and limiting what these four could do in a cage.

So why did it work? For one AAA was wise to keep it very short. Two, there was very little wrestling and a whole lot of hardcore shenanigans to hide the weaknesses. And finally, there were some honest to Grodd cool spots in this match. Murder Clown being launched into the ladder by Psycho Clown to escape the cage was something else. It shouldn’t be possible for two guys that size to make it work, and yet they did. That normally would’ve been the best spot…except Psycho Clown had to top it with an awe inspiring splash from the top of the cage that sent him and Monster Clown through a table as the match climaxed. Now you know why they call him Psycho Clown. Throw in a few other spots (like a nasty looking spear by Killer Kross that sent Psycho off the cage and onto several weapons) and this wound up being entertaining. It won’t go down as a Match of the Year contender or even a memorable match necessarily, but kudos to all four guys for delivering something worthwhile and especially to Psycho for showing just why he’s the ace. I enjoyed this; hell I even enjoyed Aerostar kicking the shit out of Monster Clown afterwards. I’m still not sold on that feud yet but Aerostar showed some great fire in the beat down and if anyone can make that feud work, it’s the guy who just did this a few days ago.

On a night where everything but the semi-main went expected, this main event, for better or worse, was also what we expected. They went the Wagner-Máscara Año 2000 Jr. route, with one rudo referee (this time Copetes Salazar instead of Tirantes, who was hurt) screwing over Wagner till Wagner took him out, Karen Jarrett interfering often, a swerve by Blue Demon Jr., a save by Psycho Clown and Wagner overcoming it all to shave Double J’s head. Hell we even had a Vampiro cameo just to hit big match AAA bingo! I’ll say this much; it worked better than it did for Wagner vs. Mundo at Guerra de Titanes, if only because that match was a catastrophe of the highest order. This match was a catastrophe of a medium order. They tried their best to make it work and AAA threw everything they could at the wall, but in the end nothing could hide the fact that Jeff Jarrett is a 51 year old well past his prime and Wagner just isn’t the guy who can make a match like this work with that caliber of talent. He probably can’t make it work with Blue Demon either (if that is indeed his next feud) but at least Demon can move and take big bumps to give that match a flicker of hope. This had none of that and I for one am happy we have a bald Jarrett and don’t need to see him anymore.

There you have it sports fans. I’ll see you tomorrow with the results from CMLL’s Puebla show. TILL THEN! 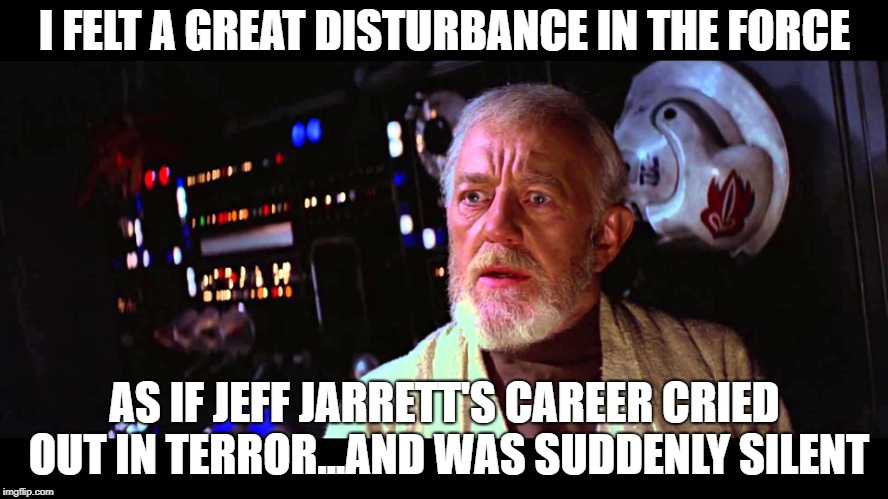