A Brief History of LA Park vs. Rush

I know what you’re thinking sports fans; not another Rush/LA Park column! First off, you’re not actually thinking that because this is the first column Lucha Central has done (I believe) that’s strictly about this feud. Secondly, if you somehow are saying that, come on peeps. It’s LA Park and Rush, the most diabolical rivalry this side of the Rio Grande and probably the biggest feud in lucha libre since Atlantis vs. Último Guerrero. Barring Park or Rush going too far in a promo (highly possible by the way) this quarrel is going to last all the way till the 85th Aniversario in September and we’re going to be talking a whole lot about it. And there’s a topic I find to be very interesting. We all know the individual stories by now; Rush was the failed technico who became reborn as the cocky rudo leader of one of lucha libre’s greatest factions in recent memory (even if they’ve since fallen on hard times), LA Park is the cult lucha libre hero from WCW who’s quietly become one of the greatest, most charismatic performers of all time. Everyone knows this. What I don’t however is how the hell this whole rivalry began. I actually thought about it quite a bit this morning and realized I didn’t know the answer, and I imagine there are many more lucha libre nuts out there that are in the same boat. A little bit of research later and well, here we are. For those interested, let’s take a quick look at how LA Park vs. Rush became the hottest thing going in lucha libre.

The way Park and Rush throw themselves at each other you’d think they’d have been feuding since people were excited for Poseidon being in theaters. According to my research however, the first LA Park-Rush encounter was a little less than three years ago. That’s all! The match in question took place on June 27th, 2015 in Tlalnepantla, Estado de Mexico, Mexico for the indie promotion Lucha Libre Boom and saw the not so surprising team of Park and his son (El Hijo de LA Park) take on the very surprising team of Rush and Mr. Niebla. To think that Mr. Niebla and his fake afro were ground zero for the Rush-LA Park beginnings (note; Mr. Niebla’s fake fro was actually not there. This saddens me). The match had actually been billed as a straight singles match between Rush and Park but was changed the day of for reasons that are still unknown. Never the less the match was very much like the later battles between the two; lots of brawling, a little blood, a weird DQ finish and a whole lot of fun. It was enough fun that Park praised Rush profusely after the match, which should’ve been the first sign this was the beginning of a beautiful rivalry. Can you remember the last time LA Park sang the praises of someone who wasn’t Dr. Wagner Jr. prior to this moment? I can’t.

The two collided a few more times in trios/tag action on the indies until a few months later when LA Park was brought back to CMLL alongside Wagner. I’m pretty sure the intention was for CMLL to build to Wagner-Park at some point down the road (by the time they were brought in the 82nd Aniversario already had its main event in Atlantis vs. La Sombra) but the chemistry Rush and the Chairman had on the indies quickly became apparent in two wild Arena Mexico main events in late August/early September. Unfortunately they were too wild! After the second trios match LA Park got a hold of a mic and…let’s just say he said some things that would only be appropriate at a Chris Rock standup special. And even then I don’t know. That was enough for CMLL to famously give him the boot, which led to Wagner walking out and the end of any possibilities of Wagner-Park or Rush-Park in CMLL. Considering it eventually led to Wagner making $250K for losing his mask to Psycho Clown I’d say that’s a pretty big game changing moment wouldn’t you? CMLL could’ve had Wagner’s big pay day; instead Park insulted people’s mothers, Wagner stayed loyal to his friend and kaboom. I hope Dorian Roldan sends the Chairman a fruit basket every September for that.

After Park’s firing he and Rush didn’t really see much of each other for the next several months, until the Chairman’s return to Lucha Libre Elite in the spring of 2016. You may remember that once upon a time Elite and CMLL worked together, an agreement that allowed Elite to do shows in Arena Mexico and thus opened the door for Park’s return. They tangled in a few trios matches and a cibernetico before being booked against each other in Elite’s nonsensical Liga Elite in July; their first major singles match against each other. I say first major because the first actual LA Park-Rush one on one match was in Tijuana on June 3rd. The match is available to watch on YouTube if you’re game and it looks to be exactly what we’d come to expect from the Rush-LA Park rivalry going forward. Except for one thing…it didn’t take place in Arena Mexico with one of the hottest crowds ever in attendance.

If you’re a wrestling fan who pays attention to everything then you’ve heard of LA Park vs. Rush from July 14th, 2016. Not only was it the talk of the lucha libre universe for at least a week after it happened but it crossed over to other places; I even recall Bryan Alvarez telling people to go check out the match on one of his podcasts. It was the type of match that every one anticipated would be something memorable going in and then it somehow became bigger thanks to a call to DQ both men at around the seven minute mark. You could kind of understand Paco Alonso, Edgar Noriega or whoever it was who made the decision to call it at the time; Rush and Park were throwing what I still believe to be a refrigerator at each other (Rush had gone into the Arena Mexico walkway to bring it down to ringside) and were both bleeding. The problem is Arena Mexico reacted to the finish as though they had just watched the Boston Bruins beat the Vancouver Canucks in the Stanley Cup Finals; I don’t know if they would’ve rioted but I would’ve bet money on it. So the Chairman and Rush did the only thing they could do; they kept brawling and brawling until the next thing you know money was being thrown into the ring.

The aforementioned fridge. Or possibly a trash can apparently.

The ramifications were massive. Park was once again booted from Arena Mexico soon after while Rush was suspended by CMLL and removed from the 83rd Aniversario main event, where he was supposed to battle friend turned rival La Máscara in a mask vs. hair match. Hell if you’re really into conspiracy theories you could even argue that this match nuked the CMLL/Elite partnership, which quickly dissolved soon after this match. But more importantly the legendary encounter solidified Rush vs. LA Park as a must see match that EVERYONE wanted to headline the CMLL Aniversario. I even wrote an open letter to Paco Alonso begging for the match. It was not to be, probably because CMLL was scared shitless of the possibility of the match and the buildup going off the rails in a way they didn’t want. Thus LA Park vs. Rush was relegated to the indies, where they continued to battle in singles, triple threat, tag and trios matches in places like Queretaro, Monclova and Monterrey. Most notably the two clashed again in Mexico City in early 2017, a match many consider to be close to, if not on the same level as the Arena Mexico brawl. I think most of us expected this to go on forever, with CMLL likely to never budge on bringing LA Park back and only the outside shot of AAA being able to grab both guys to do the match. Luckily we were wrong as LA Park came back last week, he and Rush are scheduled to tangle tonight in trios action and we’re on route to the biggest Aniversario main event since 2014 provided no one does anything stupid.

So there you go sports fans. It turns out that Rush-LA Park isn’t a decade long struggle but rather a more recent blood rivalry built on lots of indie confrontations and one legendary, unforgettable brawl in Arena Mexico. In some ways it’s only luck that we’re where we are today; if Park doesn’t cut his promo after that match in September of 2015, if Elite and Park aren’t booted after the July 2016 match, if Rush isn’t suspended…I mean who knows. Any one of those things changes and we’re in a different lucha libre world. But we aren’t and thank Grodd for that because I can’t wait to see what the next chapter in LA Park vs. Rush is going to be like. I imagine it will involve some blood, some bad words and a whole lot of people losing their shit. 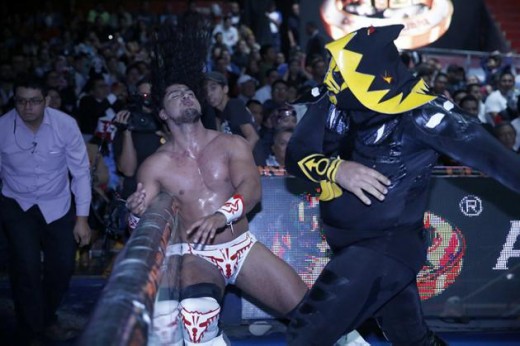